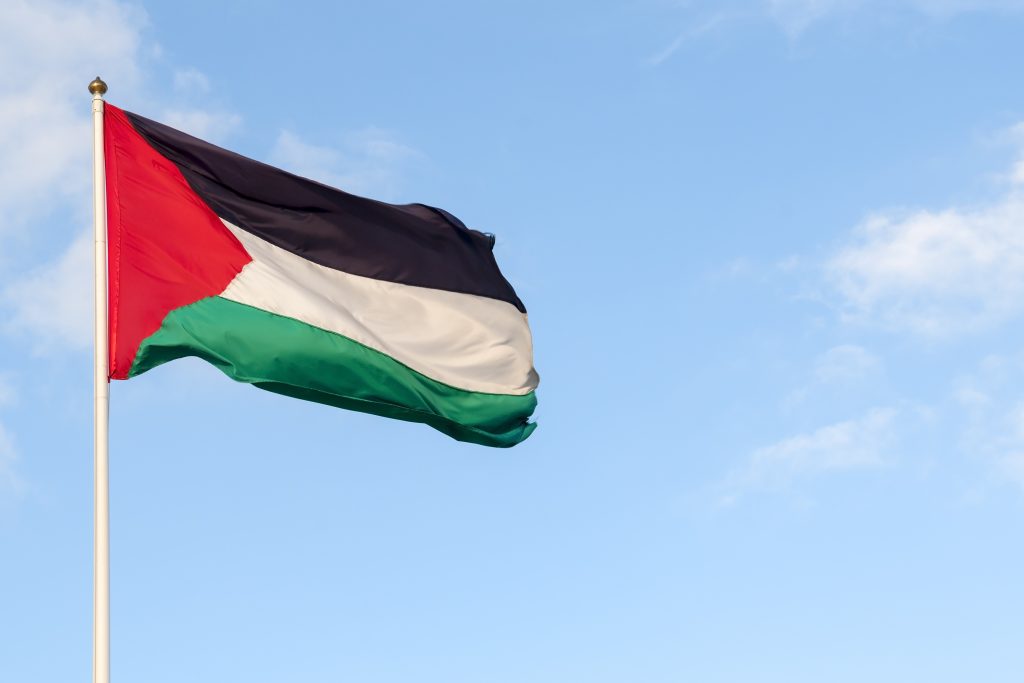 Palestinian flag and skyMore of my images from Jerusalem and the West Bank:

Some portions of this article detail graphic personal accounts of sexual assault, torture, and violence that some readers may find disturbing.

In the summer of 2015, I embarked on a trip to Occupied Palestine, an experience that would change my life forever. Palestinians have lived stateless and under Israeli military occupation for over half a century. I witnessed a world that I thought was only a thing of the past. Little did I know it would be a world I would think about daily from that day on. As I viewed roads in the West Bank city of Hebron labeled “Jews only” and “Palestinians only,” images of the Jim Crow South came to my head.

For the past fews week, I have spent time in Johannesburg, South Africa, where I have met those who were involved in the anti-apartheid struggle. In these meetings, one thing that has stuck out to me is the love that South Africans have for the Palestinian people. One South African who took part in the Soweto uprising told me, “Israel is not like apartheid South Africa. Their system of apartheid is ten times worse.” This love is expressed in ubiquitous shows of solidarity here in South Africa. One of the most interesting shows of solidarity that I found was that entire tickets of students running for student government in South Africa will all wear Palestinian keffiyehs in their campaign photos.

There has also been massive support here for the 1600 Palestinian political prisoners who are currently on hunger strike. Many South Africans, including the Deputy President of South Africa, Cyril Ramaphosa, even joined the Palestinian prisoners on hunger strike, going without any food for 24 hours between May 14th and May 15th.
The Hunger Strike
Since April 17th, about 1600 Palestinian political prisoners have been on hunger strike in Israeli jails. Today marks the 33rd day of this hunger strike simply demanding basic human rights. The hunger strikers demand the state of Israel comply with international law in regard to their treatment of Palestinian prisoners. As we witness these hunger strikes, it is critical that we, as Vanderbilt students, stand by the Palestinian people in their fight against systems of unfair trial, mass incarceration, and sexual abuse. Moreover, it is also critical for students to examine the ways in which we, as consumers, members of various institutions, and citizens of the United States, prop up Israel’s apartheid regime that is engaging in these various human rights abuses against Palestinians.

Israeli human rights violations against political prisoners have been well-documented and condemned by a plethora of human rights organizations including Amnesty International, Human Rights Watch, and the United Nations. One of the primary issues in this court is the notion of administrative detentions. Of the over 6,000 political prisoners in Palestinian jails, the Israeli government has detained over 500 of these prisoners under a policy of administrative detention.

Administrative detention is a policy in which prisoners are tried using “secret evidence.” The prisoners remain unaware of accusations leveled against them and are not allowed to defend themselves in court. Detention periods can also be renewed as many times as possible. South Africans who lived under apartheid have described this as equivalent to apartheid South Africa’s system of “detention without trial.” Similarly, the South African apartheid government set up a “court” where the concern was not actually a fair and just trial, but simply the rounding up of political prisoners.

This mass criminalization of the Palestinian people can be documented in the fact that 800,000 Palestinian men (40% of the Palestinian male population) have all been incarcerated by the Israeli military. One of those incarcerated was Issa Amro, a man who many refer to as the “Palestinian Gandhi,” for his nonviolent action against Israel’s building of settlements in the Occupied West Bank that are illegal under international law. Amro faced jail time for 18 charges, ranging from “insulting a soldier” to “assault.” Amnesty International reported that “the deluge of charges against Issa Amro do not stand up to any scrutiny,” calling the charges “baseless and politically motivated.” Issa Amro is just one of hundreds of thousands of Palestinian men who are thrown in Israeli jails on baseless charges.
Personal Accounts
Beyond being arrested on fictitious charges and tried within fictitious courts, there is also massive abuse of Palestinian prisoners within Israeli prisons. One case is that of Marwan Barghouti, the prisoner who has been leading this hunger strike.

In a New York Times op-ed titled: Why We Are on Hunger Strike in Israel’s Prisons, Barghouti writes:

“I was only 15 when I was first imprisoned. I was barely 18 when an Israeli interrogator forced me to spread my legs while I stood naked in the interrogation room, before hitting my genitals. I passed out from the pain, and the resulting fall left an everlasting scar on my forehead. The interrogator mocked me afterward, saying that I would never procreate because people like me give birth only to terrorists and murderers.”

Children are no exception to this system of abuse and mass detention. Human Rights Watch documented the abuse in a report titled “Children Behind Bars” that:

“Each year, Israel arrests, detains, and prosecutes in the military court system some 500 to 700 Palestinian children suspected of criminal offenses in the occupied West Bank, according to Defence for Children International/Palestine Section. Israel is the only country that automatically prosecutes children in military courts. In 2015, Human Rights Watch found that Israeli security forces used unnecessary force to arrest or detain Palestinian children as young as 11 in East Jerusalem and the West Bank, and have choked, beaten, threatened, and interrogated children in custody without parents or lawyers present.”

Such actions fall nothing short of despicable and are an anathema to human rights. It is critical to understand that the such abuses have little recourse, despite being condemned by a significant portion of the international community. The United States government serves as an enabler of Israel’s impunity, providing billions in arms to the Israeli government thereby making the same mistake of the past when it provided military arms to South Africa’s apartheid government. Numerous South Africans who were pillars of the anti-apartheid struggle have made the comparison between Israel and apartheid South Africa.
The South African Connection
Archbishop Desmond Tutu stated, “Israel is an apartheid state…I know firsthand that Israel has created an apartheid reality within its borders and through its occupation. The parallels to my own beloved South Africa are painfully stark indeed.”

Ahmed Kathrada, an anti-apartheid icon who was jailed with Nelson Mandela at Robben Island for 18 years, stated upon returning from Israel-Palestine that:

“In our short stay here we have seen and heard enough to conclude that Apartheid has been reborn here. In its reborn form it is however worse than its predecessor. Even during the worst days of Apartheid we did not have walls to divide and control people, we also did not have separate roads for separate races, and we did not have the system of checkpoints that exist here.”

Just as boycotts, divestment, and sanctions played a critical role in ending apartheid in South Africa, these same tactics play a critical role in ending apartheid in Israel. It is for this reason that Palestinian launched the Boycott, Divestment, and Sanctions (BDS) movement, started by a coalition of over 170 organizations within Palestinian civil society, as a means of non-violent resistance to put pressure on the Israeli government to end its human rights abuses against Palestinians.
The American Connection
The reality is that the United States government has, for decades, served as the enabler of Israel’s impunity. In addition to providing nearly $40 billion in aid to Israel over the next 10 years, which is more aid than any other country in the world, the United States government has been completely silent over these various prisoner abuses happening.

Fortunately, this one-sided blind support for the Israeli government is waning within public opinion. Student governments at Stanford, Northwestern, the University of Chicago, Princeton, Oberlin, and Vassar have all called for their universities to divest from companies propping up Israel’s apartheid regime. Additionally, a Brookings poll found that 60% of Democrats support sanctions on the state of Israel, while 46% of Americans overall support sanctions on the state of Israel. Despite this, not a single member of Congress or the Senate supports sanctions on Israel. Bernie Sanders has been most progressive on this issue, suggesting that “a portion” of American aid to Israel “should be directed toward…humanitarian and reconstruction materials” in Gaza.

Another poll of 802 Democratic Party opinion elites conducted by Republican pollster Frank Luntz found that 76% believed that Israel held too much influence on US foreign policy, while 47% of Democrats considered Israel a racist country.

Even young American Jews have been shifting rapidly in support of BDS. Only 31% of American Jewish college students consider Israel to be a democracy. Jewish Voice for Peace, an anti-Zionist, pro-BDS Jewish organization, is currently growing more rapidly in membership than any other Jewish organization in America. A 2014 J Street poll found that 49% of American Jews under 30 support a boycott of Israel.
A Call to Action
As these Palestinian prisoners continue their hunger strike in order to protest their horrific conditions, it is critical that we, as Vanderbilt students, stand by them. An important part of ending apartheid in South Africa was the amount of American college students who advocated for the freedom of Nelson Mandela and all other South African political prisoners when they were jailed at Robben Island. The time has come now for American college students to advocate for the freedom of Marwan Barghouti and all other Palestinian political prisoners. In the words of Angela Davis, “Palestine is our South Africa.” Just as college students before us helped end apartheid in South Africa, we too can end apartheid in Israel. To stand by these Palestinian prisoners on hunger strike is our moral imperative as college students.