Outstanding Senior: The Perfect Winner from an Imperfect Process 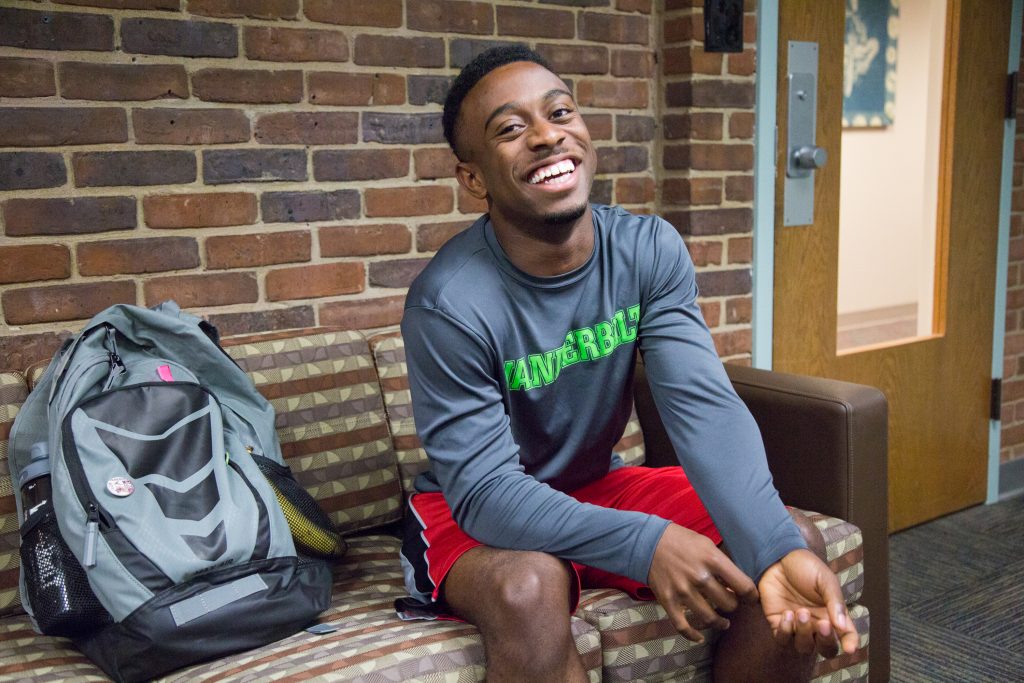 Waiting for Vanderbilt’s 2017 Outstanding Senior outside his 11:00 class, I could not resist letting out a couple audible laughs. I recalled the first time we met, as he jumped over the couch across from me in the commons center and excitedly said, “Hi, I’m Sam.” A couple days after meeting, we went to Chipotle in Halloween costumes for half off burritos and he showed off his stellar dance moves while we waited in line. Now, four years later, Sam Edwards emerges from his class and puts me in a loose headlock right away. The same Sam as always.

Sam relaxed in the stiff office chair, sneaking his shoes off underneath the table, and we began. He sighed, saying, “At the end of the day my life doesn’t really change that much, I just have a big diploma thing and a silver bowl with my name on it.” While his life may not seem to change much, his winning of Outstanding Senior meant so much to so many people. As the first African American male to win the title, Sam is evidence himself, “If you’re a midwestern African kid that grew up in a low income neighborhood and your parents battled their way through this world to give you what you have… If you’re like that, and you’re coming to a place where a lot of of people are from the exact opposite situation, which frankly makes their lives a lot easier, you can still do well here.”

While he thinks the Outstanding Senior title is just a label, Sam still hopes it will inspire students who come from similar backgrounds, saying, “I’m going to learn more to become the best version of myself and I’m going to do that in a way that I can go back at some point and tell all those other people that are just like me, ‘Hey, come on, we can do this.’” Sam passionately acts as a role model for first year students and hopes to convey this message to them.

As a first year himself, Sam wishes someone had comforted his anxieties about his ability to compare to other Vanderbilt students. He recalls, “A lot of people don’t necessarily know a lot of the doubt that I had coming in because I was off the waitlist, I was not a straight A student in high school, [and] from a test score standpoint I was nowhere close to being here.”

The insecurity about academic abilities Sam carried weighed heavily for nearly three years. The pressure and doubt got to him eventually and “sophomore year [he] almost got kicked out of all the things that [he] was in because [he] didn’t have the GPA requirement, and [he] had to appeal to stay in things like VSG.” The struggles he faced are typical of Vanderbilt students, but frequently hidden. Sam’s presence as the most Outstanding Senior despite these hardships is impactful in changing the classic idea of what a Vanderbilt student should be. He is still humble about his accomplishments, saying, “In my opinion I’m not the most outstanding senior, I’m not the most outstanding person, I haven’t accomplished things that are grand or noteworthy but I feel like knowing that people feel like you being here makes a lot of sense when for three years of my college experience I didn’t feel that, it’s pretty cool.”

Despite his own surprise, many people around campus had a gut feeling that Sam would win the award. Sam has meaningfully impacted student lives for four years now, through his roles as a VUceptor, tour guide, resident advisor, service leader, and friend. Part of what makes Sam so truly outstanding is the priority he places on people, explaining, “In my opinion everyone is worthy of my attention and my time and if I can positively impact their lives in some sort of way, I’ll do it. That’s what I’m here for.” He has been there, time and time again, for struggling students and strangers. Perhaps Sam’s most outstanding talent is making people feel loved and worthwhile.

Humbled by his election, Sam shakes his head while saying, “I’m still going to be that same kid that procrastinates everything, that goes to all the sporting events, says hi to people in Rand, and eats really slowly. That’s still going to go on, it will just be nice to go home on Thursday and say ‘Hey mom, you didn’t raise a scrub. People like me, don’t they? I’ve done something pretty good.’” While his academic and extracurricular accomplishments are surely impressive, it is Sam’s bubbly personality and devotion to others that won him Vanderbilt’s Most Outstanding Senior, showing a community entrenched in competition and academic stress the importance of personal relationships. This year, Vanderbilt voted, and Sam’s enthusiastic personality is what stood out as most outstanding and spectacular within the senior class. Whether he is leading a service trip, a tour, or a visions session, Sam will always be ready to take a costumed dance break in Chipotle.