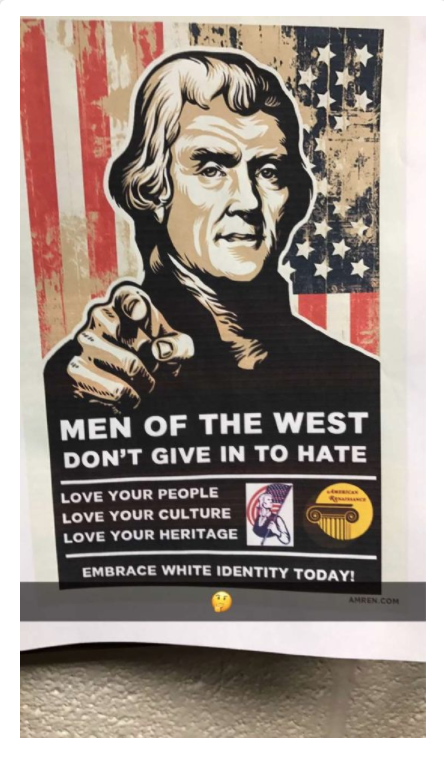 Today, posters blatantly supporting white supremacy were found hanging in a Stevenson study room—a Stevenson study room that is frequently visited by Muslim students of our community. The posters feature an older white man pointing Uncle Sam style, and read:
Men of the West
Don’t give in to hate
Love your people
Love your culture
Love your heritage
Embrace white identity today!
The posters include a symbol for the hate group known as American Renaissance, with a website link to www.amren.com, founded by Yale graduate and public white supremacist, Jared Taylor.  The individuals responsible for putting these posters up have yet to be identified.  It is unquestionable that this hateful act impacts the Vanderbilt community as a whole.

The Multicultural Leadership Council has issued a response to this blatant act of hatred.  This statement, addressed to the Vanderbilt Community, condemns American Renaissance and the racism and bigotry they represent.  This is a call to action for the Vanderbilt community to “keep a watchful eye out for any further efforts to spread the disgusting, violent, and hateful rhetoric of white supremacist groups such as American Renaissance.” Many Vanderbilt organizations have signed this response letter: Vanderbilt Interfaith Council Executive Board, the Panhellenic Council Executive Board, Vanderbilt Hillel, and the Vanderbilt Chapter of NAACP, to name only a few. Moments ago, the university sent out an email stating the flyers were “inconsistent with [the values] of Vanderbilt University.” These responses seems promising, but this situation is not as new or uncommon as people may believe. The recent history of racism, discrimination, and hatred at Vanderbilt tells a different story.

In 2014, “Arbeit Macht Frei,” a phrase meaning “work sets you free” that once unnervingly hung at the entrance of Auschwitz, was posted in duct tape on the bridge to Commons.  In 2015, swastikas were painted inside the Jewish fraternity house, AEPi.  Just last year, a Facebook debate erupted on the popular page, “Dank New Rand Memes,” over a sorority event themed around Beyoncé’s Lemonade; the debate led to intolerant remarks and several Vanderbilt students denying there was a problem with racism at the university. Each of these events sparked responses and conversation for about a week in the Vanderbilt community; then, the issue of Vanderbilt racism gave way to more important topics such as Rand bowl lines and Greek life memes.  The response to the American Renaissance posters is certainly a step in the right direction, but the conversation cannot end next week.

Vanderbilt University’s Melissa Thomas-Hunt released a statement condemning the flyers saying, “These flyers were distributed in violation of the University’s Publicity, Promotions, and Advertising policies.” The statement went on to say that “the values espoused and held by American Renaissance are inconsistent with those of Vanderbilt University. The promotion of white supremacy sharply conflicts with our core values of diversity, equity, and inclusion and we condemn it. As an institution of learning, Vanderbilt recognizes the importance of free speech and invites civil debate and dialogue.”