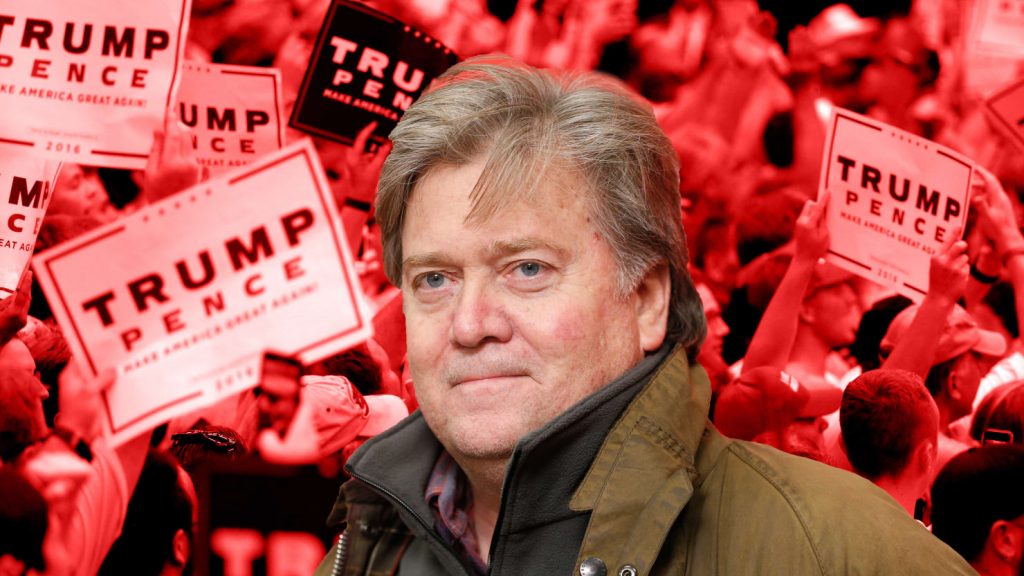 From Goldman-Sachs, to Hollywood, to the White House: Steve Bannon wants your attention.

As a political filmmaker, he never reached the heights of Michael Moore. As a media executive, he was never William Buckley or Arianna Huffington. No, he was middling. An afterthought. The annoying kid in your high school social studies class. A weed in the conservative consciousness.

Now, he’s synonymous with the newest political movement and the takeover of a major political party. He’s a character on SNL portrayed as the Grim Reaper. Steve Bannon has become an integral part of the American political consciousness.

Who is Steve Bannon?

Before becoming a political icon, Steve Bannon was a naval officer for seven years. After service, he worked for Goldman Sachs as an investment banker, eventually climbing the ladder up to VP of Mergers and Acquisitions. After his first professional successes, Bannon moved into media.

His career in media kicked off as an executive producer in Hollywood where he produced eighteen films from 1991-2016. The earlier productions were standard Hollywood films, but as he progressed he began creating politically-charged movies, including In The Face of Evil, a Ronald Reagan documentary.

This was the event that turned Steve Bannon into a true political force.

Breitbart’s death and Bannon’s takeover led to a shift in the site’s approach to delivering content to its customers. Breitbart began as a news aggregator similar to Drudge Report before beginning to create its own content. The site was founded with the mission of being “pro-freedom and pro-Israel,” and Andrew Breitbart was alarmed by the amount of anti-Israeli media in America. It quickly earned a spot in the political consciousness, becoming a less popular right-wing version of the Huffington Post.

Bannon ensured Breitbart backed the Trump campaign as early as possible (April 30th, 2016) and used the media outlet as a platform for pushing the Trump agenda, often being the first source to spin stories to Trump’s favor. As a reward, Bannon was offered the position of White House Chief Strategist, earning himself an office in the White House and unmitigated access to the President.

During his seven months in the White House, Bannon was seen as the puppeteer behind the most controversial actions made by President Trump. As a self-proclaimed populist and anti-globalist, he is credited for the push to produce the rushed and disjointed travel ban, most of the anti-NAFTA rhetoric which dominated Trump’s campaign and early months in office, and the monsoon of leaks that created the circus-like atmosphere of infighting within the White House staff.

Why does he still matter?

Furious, Bannon swore to return to Breitbart and use the company to “wage war” with Donald Trump and his agenda, calling himself “Bannon the Barbarian” and bragging that “I’ve got my hands back on my weapons.” This sentiment was short-lived.

As an absolute opportunist, Bannon likely realized the profitability of remaining one of the only Trump-backing media forces. Fox News’ unrelenting march toward Trumpism is simply not enough for the MAGA hardliners, so he tailored his mission accordingly, making Breitbart the first-responding force for pro-Trump spin.

Taking no more than a month to change his tune, Bannon’s war is now with the Republican Establishment, and the battlefield spans coast-to-coast. He plans to back a primary challenger to every GOP Senator running for re-election this year, making eight in total. He is the new political face of the alt-right.

He is already winning.

In the Alabama primary, mainstream conservative Luther Strange earned the endorsements across the party, from the Senate Leadership Fund, to the NRA, to the President himself. Roy Moore, a candidate with personal conduct and political convictions befitting of the 1950s, had Bannon’s support. Roy Moore won.

Tennessee’s primary is shaping up for Bannon too, with Bob Corker choosing to retire instead of facing a tough primary after a prolonged spat with President Trump. Another Bannon-type, Marsha Blackburn, has stepped into the primary race to fill the vacuum and is currently the odds-on favorite to win the seat.

Classic conservative Senator Jeff Flake of Arizona followed suit in announcing his retirement after just his first term instead of facing a Bannon-esque and all-around horrible person Kelli Ward in what would have surely been an ugly primary.

Importantly, Bannon has the ability to run a nationwide crusade against classic conservatives because of the apparently unending financial support of Robert Mercer, a wealthy hedge fund manager who’s invested in Bannon’s projects for years, including the expansion of Breitbart itself. Without the Mercers, Bannon could only wage an online culture war. With them, he can fight for real.

Bannon’s brand of identity politics is dangerous, the kind of cultural warriorism that’s poisoning the current political forum. Republicans have railed against Democrats for years accusing them of utilizing such tactics and warning of their dangers, yet many Republican voters relished the ethno-nationalism and racial tribalism which so clearly radiated from his public speeches. It is this contingency to which Bannon panders. He is no longer inside the White House walls, but these voters make him as powerful as ever.

This country needs a functioning left and right to make the governmental gears turn. Chaos is catnip to opportunists and anarchists like Steve Bannon. His agenda is one of disruption, destabilization, and demagoguery.

So far, his plan is working.

This is the introductory edition to our series titled “Battling Bannon”. We will be monitoring his political plays as the 2018 elections grow nearer and report on the implications of his dealings as primaries progress.