Reflections on American Interventionism, Part I 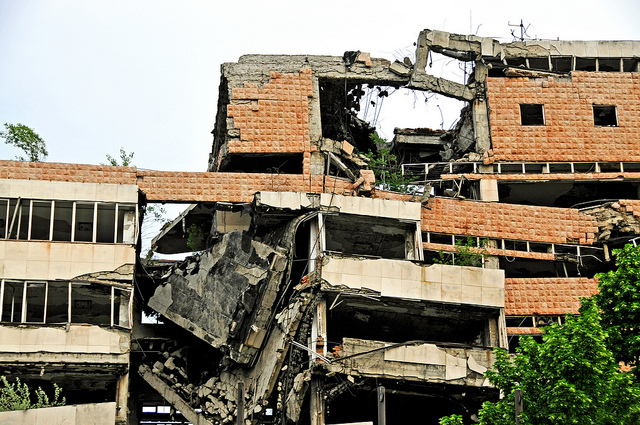 This is the first in a pair of pieces reflecting on American Foreign Policy based on the experiences of the author in Successor States of the Former Yugoslavia.

When informing friends and family that I would be spending this semester in Serbia, I was often posed with one of two questions; either “Isn’t it really cold there?” referring to Siberia, or “Is it safe to go there?” referring to Syria. Interestingly enough, Serbia and the surrounding nations, were the source of international news in the 1990s, during the bloody wars which composed the Breakup of Yugoslavia.

While most Americans I know cannot find Serbia on a map, 18 years ago, it was the target of NATO’s Bombing Campaign. Following the signing of the Dayton Peace Agreement (ending the Wars in Bosnia and Croatia), The Federal Republic of Yugoslavia, composed of Montenegro and Serbia, turned to deal with conflict in Kosovo.

NATO began a bombing campaign on March 24, 1999. Lasting 78 days, NATO, primarily led by the US under Bill Clinton, let bombs loose all over Serbia, Montenegro, and Kosovo in an attempt to force disengagement of the warring parties. When that failed and all pre-selected military targets were exhausted, the targets widened to general infrastructure, including bridges, radio towers, water sanitation plants, civilian centers – Belgrade, Niš, and Priština – as well as hospitals, factories, and refugee camps.

The Bombing ended on June 10, 1999 and UN peacekeepers entered Kosovo. Kosovo declared independence in 2008, and has been recognized by 110 UN Member-States. To this day, Serbia does not recognize the sovereignty of Kosovo. “Kosovo je Srbija” (“Kosovo is Serbia”) is a common slogan within the Serbian political lexicon .

With this brief historical background laid out, I’ll share with you my experiences from living in Belgrade.

Belgrade is a modern city: clean water, great food, plenty of museums, pedestrian streets, bars, and parks. Most of the time, it’s hard to realize that less than 20 years ago, bombs were falling on the city, until you happen to notice one of the many memorials/monuments scattered throughout the city.

When commuting to class most days, I would hop on Tram #7. By far the most convenient, and also the most crowded, option for me to get to class, I usually just focused on trying to not fall over when the tram would stop and start suddenly. But there was always one point during the ride that I would look out the window and see one of the most iconic ruins of the bombing. The Generalštab was the home of the Yugoslav Ministry of Defense and was targeted by NATO in late April and early May in 1999. Over the years, the Serbian Government has spent money on ensuring its remaining structural integrity, without changing any of the aesthetics of the ruined building. It stands as a reminder of the campaign, of the strength and resilience of the Yugoslav (really meaning Serbian) military during that time. On the other side of the road stands the second part of the complex, with its facade covered by an enormous poster of a military woman. While my Serbian skills are nowhere near developed enough to read the propaganda, it is obviously stoking military fervor in the population, even if it is mostly unnoticed by the locals.

Another hotspot is a pseudo-memorial in front of the Serbian National Assembly. Draped on a row of steel barricades are large posters, often with anti-NATO and anti-KLA (Kosovo Liberation Army) slogans. Often used as an excuse by the Serbian Government to deny petitions for planned protests, the makeshift memorial has de facto official status even though it is preserved by a private organization on public property. When I first arrived, the poster read “We will never forgive you for killing our children” and had pictures of young kids, NATO aircraft, and the NATO flag.

With all that anti-NATO (more specifically anti-American, and even more specifically anti-Clinton) sentiment in the air, I was expecting many of the people to be cold to me. Needless to say, that is not the case. Even across generations, I have only had warm and pleasant experiences, even if we can’t fully communicate with each other.

While older people have almost no working knowledge of English, they are spritely and often cracking jokes at the tram/bus stops with anyone who is around to hear them. They turn to me, make a comical observation about how late the tram is, and then start laughing, to which I respond with the best laugh I can. Other times, they will ask me something about the tram and I give them my best “Ne razumem srpski” (“I don’t understand Serbian”) or “Ne pričam srpski” (“I don’t speak Serbian”).

Younger people usually have an excellent grasp of English and are always eager to practice it with native speakers. Never have I had an unpleasant experience in my time here that was directed at me.

That being said, there have been a few uncomfortable scenarios. One night, I was having dinner with my homestay mother and two of her friends. While she speaks excellent English (she is an English teacher in Belgrade), her friends knew very little. At that point in the semester, I had already visited both Bosnia and Kosovo. When asked by one of the friends where else had I visited, I only stated Bosnia, as to avoid the uncomfortable mentioning of Kosovo. She said that Bosnia is beautiful, especially Sarajevo.

Quickly, my homestay mother fired off something in Serbian, and the only word I caught was “Kosovo” and the friend’s demeanor immediately changed. She then asked where in Kosovo had I been. I responded “Priština” and she made a comment along the lines of “They take you to the best of Bosnia and the worst of Kosovo.” Serbs often praise the monasteries that are scattered throughout Kosovo, primarily in Serb-dominated areas, while calling the Albanian-majority areas, such as Priština, dirty and run-down.

What is obvious is that there is a stark divide in the national narrative (Down with NATO, America is an Enemy) and what is lived on the ground. While some are jaded with NATO as a whole, many Serbians have a positive view of America. They are warm and inviting, always open to sharing personal experiences, and love it when you attempt to use Serbian in conversation (no matter how bad it is). In a country that supposedly has hard, nationalistic tendencies, I have never felt unsafe. While the national memory is fixated on the lives lost in the NATO Intervention, most people have moved on and are happy that Americans are both visiting and living in their country.

Those 78 days have faded from the minds of most Americans, but it is engrained in the hearts of Serbians. Granted, NATO decided to bomb Serbia following the failures of the international community in the Bosnian War (more on that in the next installment), but was this perhaps too much? Was dropping bombs on a country, including hospitals, civilian centers, and factories, morally just? These are questions that I still struggle with, and am perhaps more confused about after living in Serbia.

In the grand scheme of American Interventionism, this is just a blip on the radar. When you’re 18 years and 5000 miles removed, it’s easy to say that the Milošević regime was evil and the only way to stop violence and massacres was through military force. On the flipside, hearing the stories of Serbians who lived through that time shows that the brute force was relatively ineffective, as most of the damage was experienced by ordinary people, not the military. Moreover, how much of the current discrimination between Serbs and Albanians can be traced back to the forced separation and ensuing limbo of Kosovan autonomy?

Yes, our foreign policy has changed since 1999, but the Bombing, and its effect on Serbia, is a case study of American Policy that both worked (it ended the armed conflict) and failed (solidified the political conflict). Intervention is not always the best, especially when civilians are targeted, harmed, and killed. But, as we’ll see in the next installment, sometimes it is necessary, and our failure to do so carries the same consequences as if we had.