America: Land of the Rich (and Their Businesses) 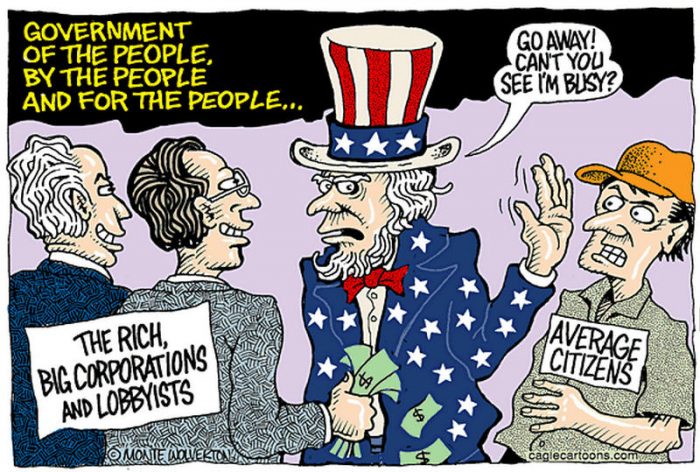 Since its establishment over two hundred years ago, the United States has been widely regarded as a nation exceptional in its provision of liberty and opportunity—the supreme manifestation of democratic and Enlightenment ideals in the modern world. Central to these ideals is a sense of equal representation for all, a notion that every citizen holds, to a certain degree, influence in the political arena. In the last several decades, however, the degradation and long-standing absence of this ideal in American politics has become increasingly apparent. It has become clear that the American political system holds the interests of the wealthy and privileged in the highest esteem, while largely ignoring the preferences and welfare of the masses.

The men called to the Philadelphia Convention of 1787 to craft the nation’s new Constitution were certainly not products of the poorer masses or even a working middle-class, but rather were the products of the “commercial and financial interests of the country.” They were all wealthy and established intellectuals, statesmen, lawyers, or businessmen, whose willingness to participate in such a convention did not stem from a democratic urge to represent the common American, but from an urgent need to protect their wealth and property previously vulnerable under the Articles of Confederation. And so, as the Framers worked diligently to ensure the domination of moneyed interests over the preferences of the masses, it is easy to see how our nation, from its very beginnings, has been predicated on a system that works to serve economic elites and corporations.

However odd it may seem to reference ancient American history, it is imperative that we understand the context through which America’s oligarchical tendencies have manifested. Today, the same moneyed interests pursued by the Framers have interestingly strayed from direct political involvement into the more elusive, “outside” spheres of influence now referred to as interest groups. In modern American politics, these groups have become virtually ubiquitous, the scope of their power rivalling or even exceeding that of legislators and government officials themselves. Interest groups are everywhere; their sway is felt by everyone.

Martin Gilens and Benjamin Page, professors of political science at Princeton University and Northwestern University, set out in an empirical study to investigate how much influence common citizens today actually wield over American policy in the face of moneyed interests. After collecting and analyzing thousands of data sets, their conclusion: virtually none. Gilens and Page determined that “not only do ordinary citizens not have uniquely substantial power over policy decisions; they have little or no independent influence on policy at all.” The preferences of the masses are nonfactors, dispelling for good practically any notion of majoritarian electoral democracy in the American political system. It seems the American Experiment in liberty and democracy doesn’t quite impress when held under close scrutiny.

So, if the majority does not rule, logic would ask—who does? The findings of Gilens and Page definitively conclude that economic elites and organized interest groups wield the real power in the American political system. The proof is in the numbers. Proposed policy reform that is opposed by economic elites (90th income percentile or above) is adopted about 18 percent of the time, while reform supported by elites is adopted about 45 percent of the time. Similarly, proposed policy changes with low support amongst interest groups have a dismal 16 percent chance of coming to fruition, while interest group support causes that figure to rise to a healthy 47 percent. Desperate to salvage something from American democracy, some would begin to argue here that perhaps successful interest groups are promoting many of the same policies as ordinary citizens, that their irrefutable power is not necessarily in conflict with the preferences of the masses. Again, we find evidence on the contrary.

Even amongst interest groups, there is a bias toward business-oriented groups that represent moneyed interests, groups whose preferences consistently and quantifiably diverge from those of average citizens. In the United States, the more representative and publically-productive mass-based groups, such as the Sierra Club or the American Civil Liberties Union (ACLU), are outnumbered, outspent, and overpowered by business groups bent on boosting profits, organizations that couldn’t care less about the needs or desires of the common people. Our government institutions and officials no longer put the health and wellbeing of Americans first; from the interest groups of the food industry to the major gun lobby, business groups work solely to boost profits, acting without a hint of concern for their impact on ordinary Americans.  It is no stretch to conclude that Gilens and Page’s findings strike a devastating blow to the very core of American democracy and a demoralizing, yet indisputable victory for the theory of elitist domination.

In “Federalist No. 10,” James Madison discussed at length the role of “factions” in American politics, conglomerates of citizens “united and actuated by some common impulse of passion,” strikingly similar to the modern concept of interest groups. While Madison was somewhat concerned about how these groups would affect his nation’s nascent political system, he had confidence in the majoritarian principle of democracy. He asserted confidently, “If a faction consists of less than a majority, relief is supplied by the republican principle. . . . It may convulse the society; but it will be unable to execute and mask its violence under the forms of the Constitution.” Madison would be devastated if alive today to witness the very real domination of the American majority by a minority of economic elites. Even in 1975, famed political scientist E. E. Schattschneider was able to see the bias that now clouds Madison’s vision of majoritarian pluralism in the U.S., eloquently commenting in The Semisovereign People, “The flaw in the pluralist heaven is that the heavenly chorus sings with a strong upper-class accent.”

America, in the minds of many, has become the land of the rich and their business. Virtually all political structures and institutions seem to be “skewed, loaded, and unbalanced in favor of a fraction of a minority,” clear and disturbing proof of oligarchy in the American political system. While moneyed interests have been central to the American political system since its founding, in recent years, the United States has experienced a definite strengthening in the influence of economic elites and business-oriented interest groups. Most startling perhaps is the fact that all of this can, and often does, occur at the expense of largely powerless ordinary citizens.

At this stage in my career, I don’t imagine that I am fully equipped to take on the entire American establishment, but I can begin to raise awareness about this scourge of moneyed domination, a sickness slowly suffocating the exceptionalism of American democracy. I intend to do just that.