The Catalonian Independence Movement And Its Impact On Students Studying Abroad 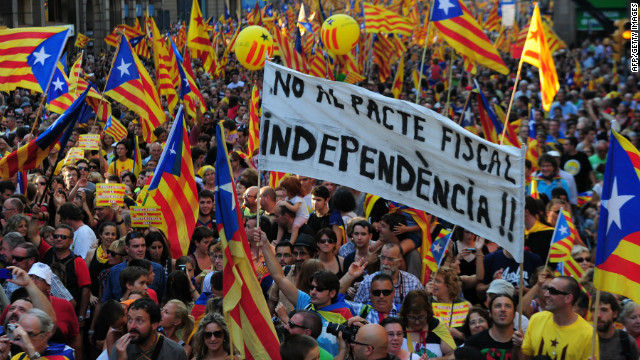 Abigail Fournier contributed to this article

Each year, Juniors at Vanderbilt have the choice to study abroad in over 100 cities throughout dozens of countries. One of the most popular destinations is the Spanish city of Barcelona, known for its historic architecture, delicious food, and celebrated museums. Recently, however, Barcelona has been gaining international attention for a completely different reason. Last month, Catalonia, a region in Northeast Spain that includes Barcelona, overwhelmingly voted for independence from Spain with 90% of voters supporting a binding referendum on secession. This massive margin of victory was despite the best efforts of the Spanish national government, which seized ballot papers and cell phones, shut down certain websites, and arrested key Catalonian officials to disrupt the vote. Spanish riot police also used batons and rubber bullets on citizens attempting to vote, leaving over 1,000 injured

In response to acts of police brutality on the day of the referendum, Catalonians have held various strikes, rallies, and protests, including a general strike two days after the election in which hundreds of thousands of citizens took to the streets. On October 27th, the Catalonian parliament (each of the 17 regions in Spain has its own quasi-autonomous legislative body) officially approved a resolution declaring independence from Spain, a move which the Spanish government insisted was illegal. In response to the declaration, the national government fired the leaders of the Catalonian government, dissolved Catalonian parliament, and ordered new elections for the region. Until these snap elections occur, the Spanish government will assume control of the Catalonian administration. Now, both sides are gearing up for a showdown in which a rebellious region tries to resist the wishes of its national government.

Although the protests in Catalonia have mostly been peaceful, this is still a potential concern for Vanderbilt students who are currently studying abroad in Barcelona, or those who are planning on studying in Barcelona this spring. Katie Hanson, a junior currently studying in Barcelona, said that the political revolution has not been detrimental to her time abroad. “Besides a few classes being cancelled due to protests, it hasn’t really affected my time abroad, logistically speaking,” Hanson said. “Our program does a good job of sending us security updates via email, so it’s nice to know there are people always looking out for your safety”. Katie was not aware of the potential political chaos when she committed to studying abroad in Barcelona last spring.

Vanderbilt students generally study with Council on International Educational Exchange (CIEE), a study abroad program that provides classes for students who speak Spanish and for those who are beginners but hope to be immersed in Spanish culture abroad. Vanderbilt has a partnership with CIEE and does not anticipate there being any issues for students studying abroad in Spain this spring.

Some students who are planning on studying abroad in Barcelona this spring are concerned about the potential chaos. Junior Samantha Schwab decided not to study abroad out of fear of violence.

“Although my parents don’t believe the situation is incredibly dangerous yet, they see it progressing to a place where it could be,” Schwab said. “They don’t want me to be ‘patient zero’ in terms of something horrible happening.”

Students who want to study abroad in Barcelona in the spring 2018 semester had to commit back in October; however, if the violence gets bad, CIEE has told students that they would give them the opportunity to move to another location where they offer study abroad, like Vienna.

“We continuously monitor the safety of our programs, and we work closely with providers like CIEE,” Baker said. “Though unexpected, if the program were to be cancelled, GEO would assist students to either identify an alternative study abroad program, or to register for classes on campus.”

For many students, the Catalonian Independence Movement is a unique political situation that is not necessarily a deterrent to their desired abroad experience, despite the disruption and even danger to the residents of the region. Melanie Benson, Vanderbilt junior planning on studying in Barcelona this spring, expressed that she was excited to see what would happen with the movement.

“I’m not worried about my safety as an American student studying in Barcelona,” Benson said. “I think it will be interesting to experience mild disruption in a different culture”.

Vanderbilt’s study abroad office and CIEE professionals will continue to monitor the situation in Catalonia and cancel the program if the situation becomes unsafe. Baker commented that Vanderbilt Incident Response for Travel (VIRT) is monitoring the situation in Barcelona and is available to help students during any travel emergency. VIRT works 24/7 to keep members of the Vanderbilt community safe while traveling abroad. Hopefully, politically stability will be reached in the region and no Vanderbilt students are adversely affected.