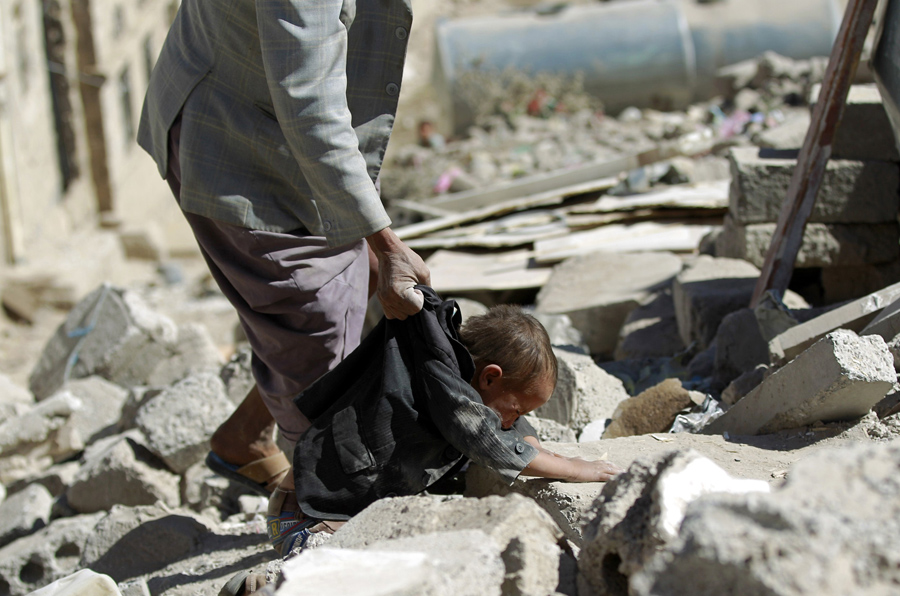 In February of this year, the United Nations declared famine in Nigeria, Somalia, South Sudan, and Yemen, claiming that the crisis endangering 20 million people is the largest humanitarian disaster since World War II. Six months later, the United Nations has classified the situation in Yemen as being the worst of any, warning that it will soon escalate to the “largest famine in decades.”  In contrast, in the United States, the last year has been defined by internal political turmoil as the Trump administration has ushered American politics into a new, unpredictable era. Partisan politics and legislative deadlock frequent the headlines of all major news outlets, and we all too often find ourselves blinded from the world outside the realm of Red vs. Blue war. In the case of the conflict in Yemen, however, we cannot afford to look away, given that the United States is deeply complicit in the potential slaughter of millions of innocent civilians.

The conflict in Yemen began in January of 2015 when the Shia religious-political Houthi movement executed a coup against President Abdrabbuh Mansur Hadi, attempting to exert control over the entire country. The shift in power toward the Shia minority was of great detriment to the interests of the country’s majority Sunni neighbors, and the Saudi government, claiming Iranian support of Houthi rebels, soon initiated an air campaign with the explicit purpose of recovering the Hadi presidency. Two months later, the United States under the Obama administration began supporting the Saudi military incursion in an attempt to preclude the looming al-Qaida threat and, alarmingly, to show solidarity with Saudi geopolitical interests in a gambit to improve increasingly tense US-Saudi relations.

Since then, the United States has engaged in myriad bombing campaigns against Yemen, with repeated strikes conducted on schools and hospitals. Subsequently, we have sold weapons to the Saudi-led coalition and are to this day continuing to provide intelligence to the Saudi military, supplying over $20 billion in arms in 2016.  These arms include cluster bombs, banned in 119 countries due to inaccuracies which often result in painful civilian casualties. Perhaps even more worrisome than all this, however, is the fact that American support for the militaristic takeover in Yemen has provided a greenlight for the Saudi government to perpetrate heinous human rights abuses on the Yemeni people with little international condemnation.

The Saudi government is currently administering a blockade against all imports into Yemen, a country which relies on imports for 90% of all basic food supplies. This has contributed to acute malnourishment throughout the country, with UN under-secretary-general warning that failure to lift the blockade could cost millions of lives. Already, it is estimated that around 130 children die every day in Yemen from extreme hunger, and this number is expected to grow as the United States sits idly by, observing the conflict we are responsible for thousands of miles away in safety. As things stand, officials have warned that the United States could be implicated in war crimes for our support of Yemen.

As the United States federal government refuses to withdraw support for the Saudi regime, the Famine Early Warning Systems Network, an American agency, warns that the current situation under the Saudi blockade “risks an unprecedented deterioration in food security,” ranking the situation in Phase 5, the worst category possible. An estimated 20 million people in Yemen, three-quarters of the population, require food assistance as the blockade continues to strangle the livelihood out of the hands of countless families across the country. The famine is compounded by violence, which has devastated the water and sanitation systems of the country, leading to a massive cholera outbreak which has claimed thousands of additional lives.

The United States can no longer avoid responsibility for the crisis in Yemen and the millions of lives at risk with it. The American government must immediately suspend support for the Saudi-led incursion into Yemen and demand that the blockade be lifted so that desperately needed humanitarian aid may finally pass to the Yemeni people. Until then, with each day we become more and more intertwined with one of the greatest humanitarian disasters of the modern era.