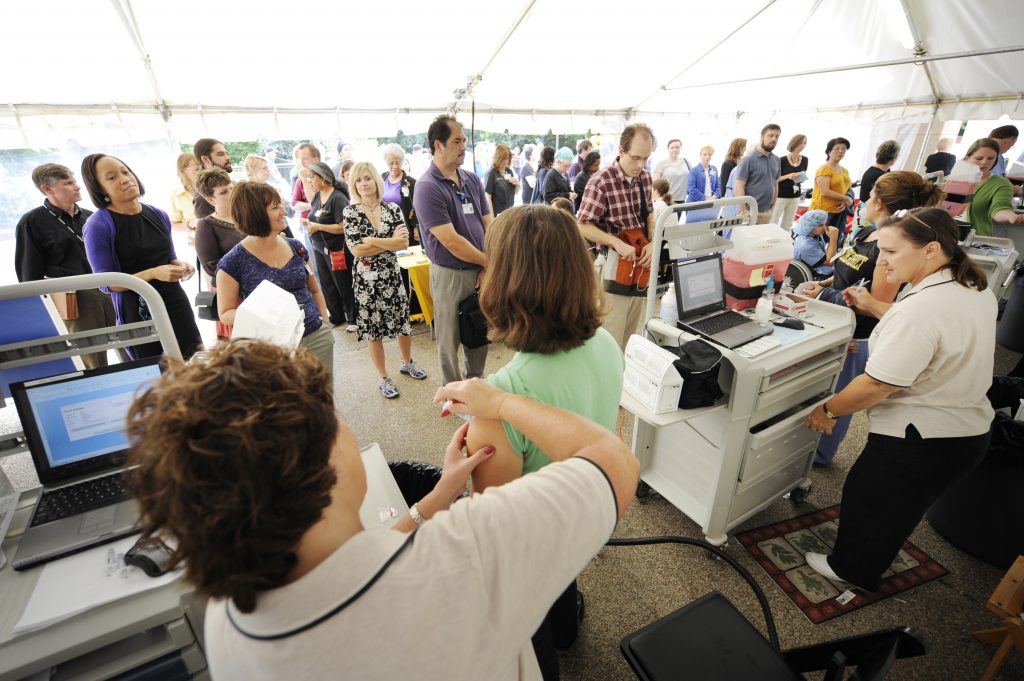 Each fall, thousands of Vanderbilt students, staff, and faculty wait in a line that snakes around the Medical Center and Langford Auditorium for a free seasonal flu shot.

The controlled chaos that is Flulapalooza is actually one of the university’s proudest achievements; what started as a practice run for a mass vaccination drill has become a record-smashing annual event. Attendance levels routinely total in the thousands, with last September’s numbers rounding out at nearly 14,000.

But with new reports questioning the efficacy of this year’s vaccination, was waiting in that line worth it?

In short, yes — but not because the shot might keep you from getting the flu.

The flu shot actually has an iffy track record when it comes to preventing illness. The CDC currently estimates that when the vaccine is at its best, the risk of influenza in the population falls between 40% and 60%.

This year, the vaccine doesn’t even fall within the CDC’s range. Effectiveness estimates for the 2017-2018 shot have been a point of contention this season, but the most recent numbers suggest a rate somewhere around 30%.

Annual flu shots are typically hit or miss because the vaccine creators mismatch the treatment to that year’s disease. Creating the seasonal flu shot is an elaborate guessing game of sorts in which scientists use the best available data to target a specific strain or strains. The gamble pays off some years, and in other years, it doesn’t.

But the flu shot is occasionally less effective for a different reason: errors in manufacturing. Like any other consumer product, vaccines are susceptible to quality control problems. Even if the manufacturers get the strain right, errors in the production process can actually weaken the overall success of the vaccine.

Experts suspect that a production error is what caused this year’s vaccine to perform so poorly. In an interview for Boston.com, infectious disease expert Dr. Paul Sax said that the version of the vaccine being distributed around the country is designed to treat H3N2, which is the predominant strain this season.

“It’s not that we got the H3N2 wrong,” said Sax. “It’s that the way that we make the vaccine somehow makes it less effective against the H3N2.”

With that information, it would be easy to cast off your Flulapalooza venture as a bust. Even if you’ve got the vaccine coursing through your veins, you’ve still got a pretty good chance of getting the flu. So why do doctors still insist that you get the shot?

It turns out that flu vaccines that don’t prevent the flu make flu symptoms less severe. Doctors don’t fully understand why ineffective flu vaccines still “work” to an extent, but the evidence in support of the idea is overwhelming. One study published in the American Society of Microbiology found that the severity of influenza symptoms in vaccinated patients “was significantly lower… as compared to those who had not [been vaccinated.]”

Vanderbilt’s own infectious disease guru and spokesperson, Dr. William Schaffner, often makes this the crux of his famous “get your shot” argument. In one interview for Consumer Reports, Schaffner said that even if you get the flu, with the vaccine, “you’re less likely to have complications, less likely to be admitted to the hospital, and less likely to die.”

That’s all not to mention that vaccinated persons do still have a (pretty small) chance of not getting the flu should they come in contact with the flu — and in the decidedly germ-filled environment of college campuses like Vanderbilt, the odds of contact are high.

And while it may not necessarily be the case at Vandy, college students are among the least likely segment to get the flu shot. In 2016, the National Foundation of Infectious Disease found that vaccination rates on college campuses in the U.S. were “strikingly low,” hovering between 8% and 39%. Students who met up with old friends from home over the holidays and haven’t gotten the shot yet might want to reconsider.

So Commodores who made it out to Flupalooza didn’t exactly waste their time; even if they do get the flu, their symptoms will be less severe for a shorter period of time.

As for those who couldn’t make it or didn’t want to deal with the crowds, now is a better time than never. On Friday, the Metro Public Health Department announced that they will be providing free flu shots on a first come, first serve basis at all of their 89 clinics.