Pain, Hope, And A Touch Of Kosher Salt: The Story Of Aryeh’s Kitchen 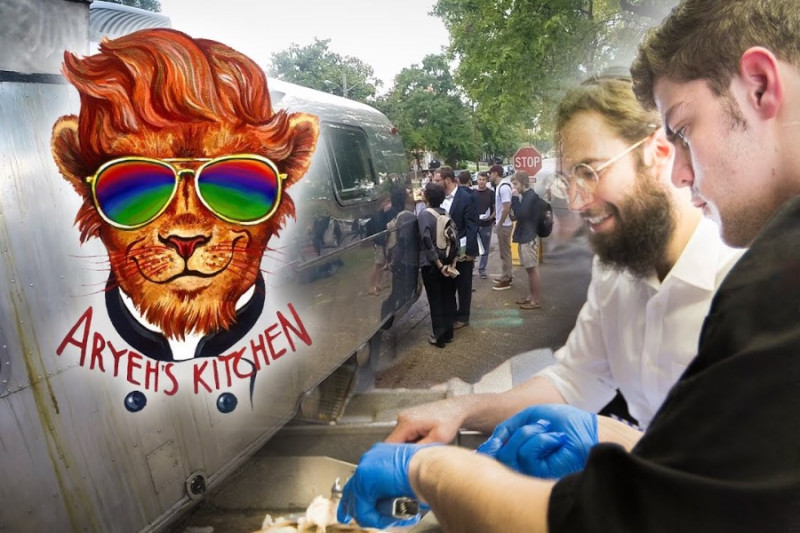 There’s something about Aryeh’s kitchen that begs a closer look. It might be the food truck’s vintage trailer, the Israeli hip hop playing outside on a portable speaker, or the Chabad rabbi serving food to students with a smile. Those who do take a second look won’t be disappointed. The kosher food truck offers double smoked pastrami, braised brisket, matzah ball soup, and other classics that serve as a welcome change from the routine of the Vanderbilt meal plan—all on the Commodore Card, no less.

While the quality of the food and the iconic Airstream trailer make Aryeh’s Kitchen unique, the story behind the food truck’s journey is even more extraordinary. It is a story of progress and setback; loss and hope; tragedy and perseverance.

Zack Freeling, founder of Aryeh’s kitchen and current 5th year senior at Vanderbilt, was just a freshman in college when he received the news that his older brother, Sam, had taken his own life while away at school. Following the death of his brother, Zack reached out to Rabbi Shlomo at Chabad House, where he found a welcoming friend and supportive community. He explained that he was never really religious but that his “support system was in shock and somehow that was the first place I looked for help.””
“It is a story of progress and setback; loss and hope; tragedy and perseverance.”
Zack, Rabbi Shlomo, and Zack’s father, Kenneth Freeling, grew close throughout the following months, supporting each other through a difficult period of recovery. During the summer before Zack’s junior year, the trio had an idea: starting a kosher food truck on Vanderbilt’s campus. The idea was perfect. As Zack explained, “it was a great opportunity to pursue my passion and love for cooking and food while doing something that serves a need of providing kosher meals to campus.” Most importantly, however, the food truck would be created in memory of his late brother.

The three founders settled on a name for the food truck: Aryeh’s Kitchen. For Zack and his father, the name choice was significant: “Aryeh is my Hebrew name. It means lion and was given to me by my father. My dad chose Aryeh’s as the name because he wanted to give me something and do something for me. It was really important to him because I was his last remaining son.”

Unfortunately, choosing the food truck’s name seemed to be the least challenging part of the venture’s first few months. After a few months of searching for the perfect truck, he found it in a sleek 1971 Airstream trailer he discovered in Sacramento. The truck required constant work with sheet metal contractors, electricians, and plumbers. “It was a taxing process,” Zack explained, “Every day something went wrong.” Their target opening date was pushed back by months, but in early May, Aryeh’s Kitchen had officially opened. The reception was positive and as the school year wrapped up, Zack was looking forward to a full year of Aryeh’s starting in the fall.

After returning to Vanderbilt’s campus in August, Zack found that “going to class and running your own business don’t usually mesh well.” His grades started to slip, and business at Aryeh’s wasn’t as good as he had hoped. Despite the best efforts of Zack, his father, and the kitchen staff, Aryeh’s was bleeding money. That November, he and his father made a difficult decision to cut their losses and close Aryeh’s for good. Zack’s father wanted him to focus on school and to not be burdened by Aryeh’s. Zack had already missed enough school that he wouldn’t be able to graduate in four years and his dad didn’t want him to miss any more time. Zack understood the rationale, but he was still crushed.

In the coming weeks, Aryeh’s went through a liquidation process, with much of the kitchen equipment being sold off. Zack’s dad was about to sell the trailer when Zack had the idea of bringing the kosher food truck back as a nonprofit dedicated to serving quality kosher food and uplifting students campus experience with friendliness and warmth. The truck would work to raise mental health awareness, an issue that had been close to Zack’s heart since the death of his brother. This allowed Zack to “not have to give up the dream while also doing good.” Rabbi Shlomo was receptive to the idea, seeing it as a way to increase wellbeing and community across campus. Zack’s father donated the trailer to Vanderbilt Chabad with the intention that they would assume the cost of the truck’s operations and overhead. The group settled on a name for the nonprofit, Healthy Spark. Aryeh’s Kitchen was reborn.

In March of 2017, just a few weeks after Aryeh’s Kitchen was restarted, tragedy struck again. This time, it was Zack’s father; unable to overcome his grief over the loss of Sam, he too had taken his own life. Waves of profound sadness and shock flooded Zack’s mind. “It happened again,” he thought. “It was a total repeat of freshman year.”

Instead of giving up, as many do in times of tragedy, Zack knew that he needed to stay strong. He used Aryeh’s Kitchen as a motivation to keep going instead of letting go. To him, Aryeh’s became more than just a food truck. Now, there was a piece of his heart there. For Zack, it was a method to channel his grief in a way that allowed him to give back to others. Zack found a certain irony in his attachment to Aryeh’s. Although it caused him a lot of stress, it was the only thing keeping him going. As he explained, “it gave me an energy to get through the fallout of what was happening.”

Over the next few months, Zack worked closely with Rabbi Shlomo to bring Aryeh’s Kitchen back to Vanderbilt. He raised nearly $5,000 dollars through a Go Fund Me campaign, and with the help of Zack’s grandmother, Joyce Freeling, a grant proposal was made to the Augustine Foundation, which provide funds to Jewish organizations. The grant gave Aryeh’s a $14,000 injection of cash. By November of 2017, they succeeded in their goal. Now, the mission of “Aryeh’s 2.0”—as Zack calls it—is intertwined with Chabad’s mission of spreading joy, Jewish wisdom and learning to the community.

Aryeh’s is working to create a space that can connect students who are in need or might be in need of mental health services to the right organizations. For Zack, a food truck is the perfect place to do this. After all, he explained, “Nothing brings people together like food. It’s the perfect vehicle to spread a positive message of hope.” Zack also pointed out the fact that there is a rabbi on staff at all times who can act as a point of first contact for students who want to talk about issues that are on their minds. The rabbi is quick to hand out cards with quotes and positive ideas that are meant to uplift each student while adding thoughtfulness and gratitude to their day. In the future, Aryeh’s Kitchen plans to partner with the Center for Student Wellbeing to facilitate workshops and trainings. In the meantime, however, Aryeh’s is focused on serving delicious food and spreading positivity and a sense of wellbeing. In Zack’s view, if he can get even one student the help he or she needs, that’ll make it all worth it. “Who knows?” he asked, “maybe we’ll be able to save a life.”

While Zack hopes that Aryeh’s kitchen can provide students with the help they need, he was not shy about describing how much Aryeh’s success means to him. “Selling off the food truck was like moving from my childhood home,” he said, “when the truck came back, I felt that I was back home again and that I had a newfound sense of purpose.” While Zack is no longer the owner or in charge of the food truck’s financial success, he is focused on one thing: ensuring that the truck is sustainable. Zack’s hope for Aryeh’s is simple: “When I’m done with Vanderbilt, I’ll be able to walk away and look back and Aryeh’s will still be running. I’ll be able to leave a mark on campus as a tribute to my father and brother. Knowing that reminds me that I can still do this. I’m not giving up.”