A response to “In Defense of Hazing” 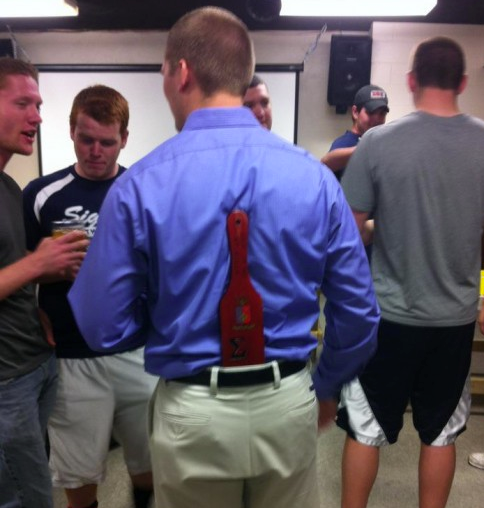 Written by an anonymous member of the Greek community.

If you’re reading this article, odds are you’ve already read “In Defense of Hazing,” by Anonymous. The author will henceforth be referred to as “Mr. Misunderstood”, as his column makes clear.

I am a junior in the Greek community who pledged as a freshman and am a better person for it. My best friends are in my fraternity, and those friendships are what make the Vanderbilt Experience worth it. Being Greek has been good to me. I applaud Mr. ‘Stood for starting this conversation on campus, one had within every fraternity house on campus for years now and deserving the attention of all Vanderbilt students.

In his column, he articulates the standard pro-hazing argument; Adversity breeds unity. Pledging is supposed to be hard. The media casts all fraternities in poor light due to a few bad apples.

So in the spirit of compelled participation, let’s do a call-and-response!

Response: Not sure if you guys are in the link-clicking mood, but the one included by Mr. Misunderstood is a serious piece from Time paying tribute to Tim Piazza, Maxwell Gruver, Andrew Coffey, and Matthew Ellis. These four “innocent freshmen boys” (as Misunderstood so accurately identified them) were killed during pledging events in 2017. One was a junior, two were sophomores, and one was a freshman. All are now innocent of everything as they’re dead, but today their memories were wedged into a sentence mocking the media campaigns of their surviving parents and relatives! Nice!

Good stuff there from Mr. Misunderstood. From now on he’ll be referred to as “Take a Joke, Bro” for that impressive lack of empathy and forethought.

Call: “There is nothing that brings people together like a common struggle. Without the unifying forces of sleep deprivation and push-ups, the classes of fraternities would be no more than loose friend groups with a secret handshake.”

Response: First, check out THAT link, which is a portal to the Scientific American article, “How the Stress of Disaster Brings People Together.” It references the melting of social barriers in the days following 9/11. This is fascinating social behavior. It has helped the human race overcome every obstacle faced thus far, and it makes us a more resilient species. This is not a license for fraternities to replicate the emotions felt during disaster so their pledges can become friends faster.

This is where the line is drawn for me, as a former pledge, in this discussion. Fear-driven hazing is lazy and dangerous. It’s the kind of hazing that, once pledges demonstrate their willingness to be intimidated, opens the door to further abuses of power and further submission by pledges. Add some of drunk brothers and some spiraling groupthink, and you get four dead pledges in the span of one year.

It’s takes an incredible abdication of responsibility to tell yourself that the current form of hazing is the best way to build bonds between brothers. We all still have close friends from high school, and nobody ever made us eat pounds of raw flour together while screaming about how worthless we were. Systems can always be improved, especially ones structured and administered by centuries of 19-21 year old boys with a dozen more important things vying for their attention. The least we can do is actually try.

Call: Fraternities lose their meaning without hazing: lots of people at Vanderbilt could pay $2000 to join Greek Life. But far fewer are willing to invest the time and energy to become a brother. And if becoming a brother is easy, what does the position mean, anyway?

Response: Look guy, do you want a medal for mopping a floor at 6 A.M.? You already get one — a large, unsupervised gathering space, the kind which non-Greek students have oppressively low access to. The idea that everyone in a fraternity should have a thick enough skin to survive brutal verbal abuse and simulated crisis just reeks of privilege. We as the Greek community need to be avoiding that title, not embracing it.

Maybe the Greek community has gotten lucky and naturally avoids people like this, making the current abusive pledging process viable. Or, maybe those whom traditional pledging pushes hardest are so used to burying the emotions associated with power-based abuse, they never release them around anyone, or ever at all. Either way, the fact that Mr. Bro made it through a pledge process built for Mr. Bro does not validate the process.

None of this is to say that the university is in the right when it comes to hazing reform. They are not. Their standards are nannying and unworkable for Vandy’s fraternities, and this massive chasm between university policy and campus reality is what drives some in the Greek community to the adversarial stance of Mr. Bro.

It’s a truly frustrating situation. There’s cross-class animosity stemming from both the process of hazing and the belief that each successive class wasn’t hazed as hard as the one before, so reforming the pledge process is an absolute slog. Everyone has a deeply-held opinion. It’s exhausting.

Pair that atmosphere with an administration which:

Limits pledges to only 15 hours of fraternity-related activity per week
Prohibits fraternities from requiring new members to learn basic personal information about brothers, such as their names, hometowns, and majors (standard friend stuff)
Prohibits any requirements for scheduled physical activity (sup ROTC and club sports)
Prohibits any situation where a pledge is required to do something not also expected of every brother, at any time, without exception

It essentially bans any sort of proving period for new members, turning fraternities into social clubs with fantastic funding. It’s creating legions of uncooperative and exasperated fraternal brothers like Mr. Bro. It works directly against the creation of a sustainable Greek community.

And even this small amount of discussion is more than anyone in the Greek community will ever have with administration, as admittal of even the most innocent parts of the pledging process will get your organization removed from campus in ceremonious and humiliating fashion.

If there is a pledging-related tragedy at Vanderbilt, administration will share at least partially in the blame — their bull-headed approach to hazing reform has made true progress even more difficult — but it’s first and foremost on the Greek community to avoid that situation, whether administration is helping or hurting.

There are many non-abusive ways to build friendships and engender responsibility for an organization greater than yourself. We should continue those practices which are already in place and expand on them going forward. We should constantly scrutinize our pledging process and distill the best parts, not bitterly insist that new members suffer the same way we did. Tradition shouldn’t be blindly emulated, but built upon.

Slow change is possible, but people like Anonymous and those who drove him to write his column threaten to eliminate Greek life from Vanderbilt for good. Let’s figure out how to avoid that.