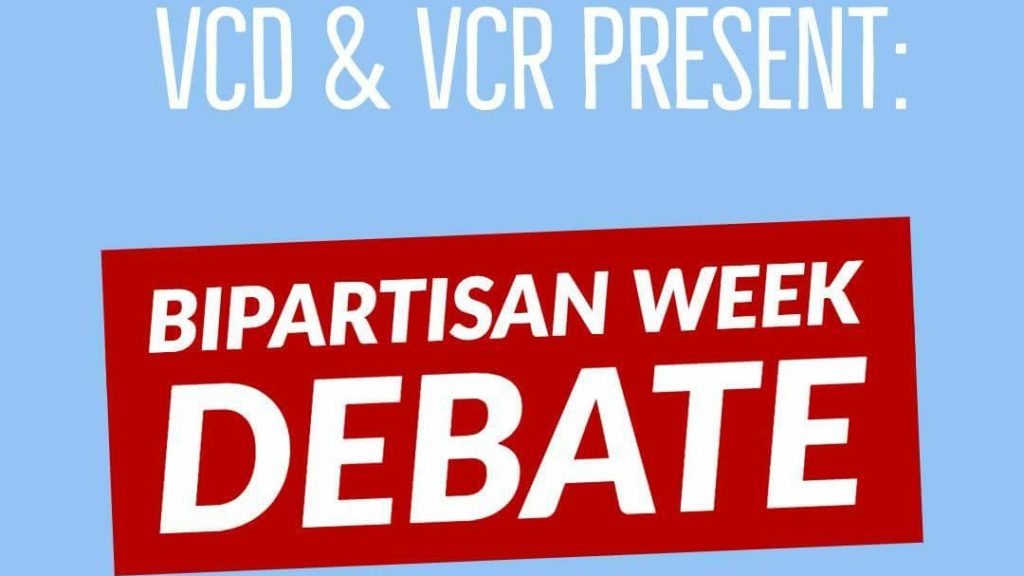 As a part of Bipartisan Week on Vanderbilt’s Campus, the Vanderbilt College Republicans (VCR) and the Vanderbilt College Democrats (VCD) set-up and participated in a debate around gun policy. Will Newell, Appa Bollera, and Rohan Marwaha represented VCD. Connor Grant, Ram Reddy, and Alexander Spanopoulos composed VCR’s team. VCD’s Cloe Anderson moderated the debate. While a bit delayed, the debate about the timely issue started without either team holding back.

Leading off for the Democrats, Will Newell referenced the NRA’s lobbying of Congress in 1996 to include the Dickey Amendment in the Omnibus Spending Bill of that year. The Dickey Amendment restricts Center of Disease Control and Prevention funds from being used to “advocate or promote gun control.” The recent Omnibus Bill that was signed in March still includes the amendment, but it has been re-interpreted by HHS Secretary Alex Azar and funds for the CDC will be allowed to research gun violence. Secretary Azar’s interpretation was included in a report that accompanied the final bill. Mr. Newell also questioned the current understanding that the Second Amendment applies to individuals, instead arguing that it applies to the state militias.

Alexander Spanopoulos, in opening for VCR, incorporated the audience by asking a series of true-false questions aimed to demonstrate facts about guns in everyday American life. These included statistics about the number of guns in America, comparisons to other country with high firearms per capita, the percent of firearms deaths as a part of the overall homicide numbers, as well as the crime rate of concealed-carry owners, which is, per Spanopoulos, one-sixth the rate of police officer.

The teams were both asked, “Do you feel that the state of Gun control in America is adequate? Why or why not?” VCR was first to tackle the question, and Ram Reddy quickly answered in the affirmative. “The Federal and State Governments need to universally enforce the existing laws,” Reddy said. He also suggested that government effectively doing its job would have prevented many of the recent shootings; there is evidence that government actors did not faithfully apply the law in the case of the Parkland Shooting. VCD’s Mr. Newell rebutted, citing a statistic that 22% of guns are purchased without background checks.

Appa Bollera took on the question for VCD, calling the state of gun control in America “morally repugnant.” Mr. Bollera continued by comparing the use of a gun to the use of an app that could kill anyone in a fifteen-foot radius. Rohan Marwaha supported his colleague with a statistic from the CDC that attributed 11,000 homicide deaths to firearms. Per a CDC Report in 2015, 36,252 people died as a result of injuries from firearms. However, these deaths by firearms did not rank in the top 15 leading causes of death, adjusted for those instances of firearms used for suicide and “Accidents (unintentional injuries)”.

Following a brief rebuttal, the second question posed, “Should the US adopt universal screening, regulation of ump stocks and extended magazines, and other such reforms?” Again, Mr. Bollera spearheaded the VCD response. Until the time comes that every gun can be removed from America, yes we should be pursuing these policies, said Mr. Bollera. Mr. Marwaha again came to Bollera’s aid in assuring that these policies should not violate the Second Amendment by comparing the restriction on libel, slander, and hate speech as not violating the First Amendment Freedom of Speech.

For VCR, Connor Grant stated, “Not all firearms are allowed, and not all people can purchase guns.” Mr. Reddy drew on a personal experience of guns for sport. He also stated that even with gun homicides removed, America is still more violent than other Western democracies. Mr. Spanopoulos closed by stating he is not opposed to background checks, while again reiterating that background checks are mandated by Federal law.

The final prepared question centered around the recent development in the private sector by gun retailers, most notably Dick’s Sporting Goods, to impose their own policies in regards to gun sales. The question read, “Corporate America has begun to take public positions in the gun control debate. Do they have a role?” Mr. Spanopoulos affirmed each firm’s right to make decisions they see fit, while also stressing his right not to do business with them. Mr. Reddy supported this view and added that there is not issue so long as they act within legal limits. Mr. Grant criticized the retailers’ decisions and brought up that those businesses were already seeing losses.

In the VCD rebuttal, Mr. Marwaha commented, “It’s sad that Corporate America is doing more than our politicians.” Continuing into their official response, Mr. Newell concluded that sometimes the private sector does the “right thing.” Mr. Bollera then pushed back-on two major arguments from the VCR team. He challenged an earlier point from VCR about the prevalence of gun violence in poorer communities, asking why then does the GOP advocate policies that further harm those with lower socioeconomic statuses. He also questioned why the idea that those who wish to break the law will find a way to do so applies to gun control, but not to other issues, such as drug policies.

After the third question, the floor was opened to questions from the audience. Most of the questions were directed at the VCR team. Two questions led to substantive rebuttals between the two teams. One led Mr. Reddy to say, “There are a whole lot of things that will kill you before a gun will” which elicited the response from Mr. Marwaha, “We should put the same restrictions as we do on cars and others like that, on guns.”

The second major rebuttal came from a question regarding the Constitution. Mr. Spanopoulos led off, stating that the Supreme Court is the final interpreter of the Constitution and it has interpreted the Second Amendment as protecting the individual right to own a firearm. “If you don’t agree, there is a way to amend it,” Spanopoulos said. This led Mr. Bollera to immediately agree that the Constitution “should be readily amended.” Mr. Bollera also said, “A majority of people in this country should not own guns.”

As a final note, there were multiple references, by both participants and audience members, to the phrase “Life, Liberty, and the Pursuit of Happiness” in the Constitution. It is imperative to recognize that the full phrase (“We hold these truths to be self-evident: that all men are created equal; that they are endowed by their Creator with certain unalienable rights; that among these are life, liberty, and the pursuit of happiness”) is actually in the Declaration of Independence, not the Constitution of the United States.