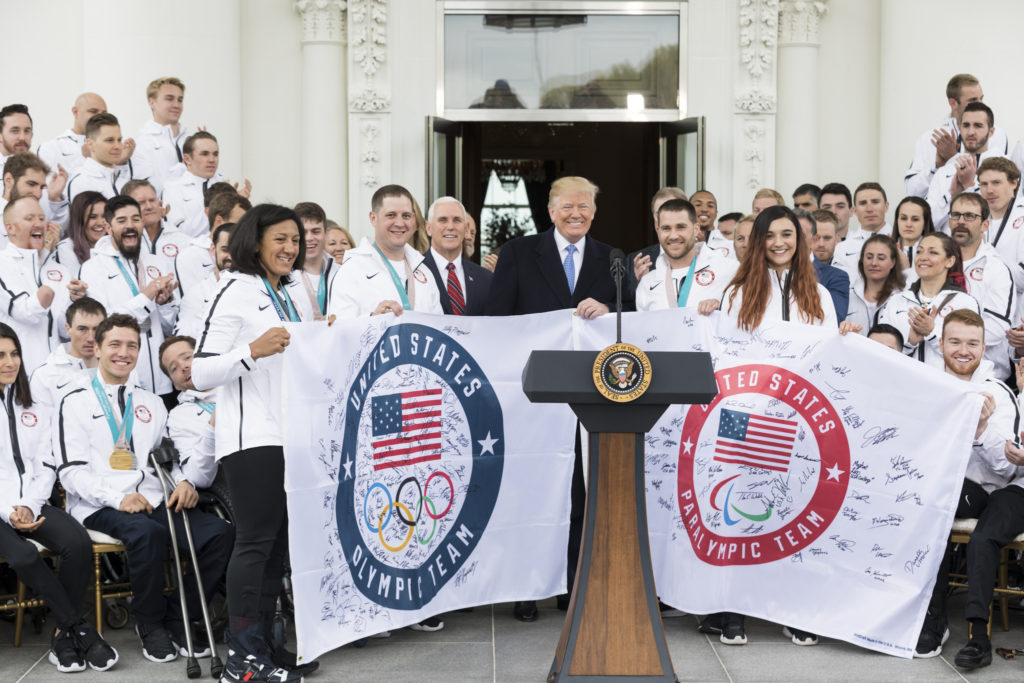 In January of 2017, President Donald J. Trump was inaugurated under the foundation of what he heralded as an “American First” foreign policy. He promised to bring his business savviness as a real estate tycoon to the international stage by renegotiating trade deals and putting a stop to global terrorist threats. Trump also rode the wave to an electoral victory on the back of his strict immigration policy meant to save American jobs and tighten the border against foreign threats.

Some Trump supporters view his braggadocious attitude as a much needed display of American strength, while detractors fear that the President will instigate unwanted war.  The following is a compilation of President Trump’s recent foreign policy initiatives to highlight key moments since he took office.

As one of his first acts as Commander-in-Chief, Trump upholds his promise to revisit trade policies of former administrations. He orders the Office of the U.S. Trade Representative to withdraw from the Trans-Pacific Partnership. This 12 country partnership contains measures to reduce tariff barriers between countries such as Vietnam, Singapore, Australia, and Mexico. In withdrawing from this agreement, Trump highlights his intention “to deal directly with individual countries on a one-on-one.” Bilateral negotiation between countries is a common feature for this administration moving forward.

In one of his most controversial moves, President Trump issues an executive order banning the entry of nationals from six Muslim majority countries for 90 days. Trump highlights fears of terrorists entering from these “high risk” areas and faces immediate global and domestic backlash. The initial ban suspends the U.S. Refugee Admissions Program for 120 days, as well as places an indefinite ban on Syrian refugees. This order additionally extends to green card holders and permanent residents from these countries, which caused many professionals and residents travelling abroad to face difficulties re-entering the U.S. A Seattle Federal Judge suspends the national order in February, and the order has faced legal challenges and continued changes ever since.

In response to an alleged chemical attack against civilians, Trump orders American warships to fire 59 tomahawk missiles at a Syrian airbase. This escalation of American military action in Syria directly contradicts his campaign promise to limit the United States’ role in the Syrian Civil War, which has continued for six years. Trump’s overall attitude towards foreign affairs has been an emphasis on refocusing foreign policy to national security issues. He continues to stress the importance of defeating ISIS with the help of Russia and a gradual reduction of U.S. forces.

In fulfillment of his campaign promise to reduce environmental regulations on businesses, Trump announces the U.S., withdrawal from the 2015 Paris Climate Accord. The agreement, which is ratified by 195 countries, stipulates that its members seek to reduce greenhouse gas emissions, as well as implement a multitude of environmentally conscious measures. President Trump has previously criticized the agreement for economically harming the U.S. and for disadvantaging industries with over regulation.

Following a successful North Korean nuclear test, as well as threats to strike Guam, Trump warns of American retaliation. Tensions escalate as both sides refuse to back down and Trump promises “fire and fury” if Supreme Leader Kim Jong Un does not capitulate. Insults fly from both camps amidst U.S. military drills in the region and the placing of North Korea on the state sponsored terrorism list.

President Trump releases Secretary of State Rex Tillerson ahead of negotiations with North Korea over nuclear armament. Diverging viewpoints in regard to climate change, trade, Iran policy, as well as Tillerson allegedly calling Trump a “moron” ultimately lead to his demise. Trump nominates CIA Director Mike Pompeo for Secretary of State ahead of Tillerson’s departure.

Trump’s camp initiated the first ever summit meetings with North Korea to negotiate the possibility of denuclearization and de-escalation. North Korea removes the demand for the U.S. to withdraw its troops from South Korea, which had previously been a major obstacle in negotiations. Trump sends CIA Director and Secretary of State nominee Mike Pompeo, to Pyongyang, North Korea to open a channel of communication and start negotiations.

In a coordinated strike with France and Great Britain, the US launches military strikes targeting weapons manufacturing compounds in Syria. Trump approves this use of force in response to the allegation against the Assad regime using chemical attacks in neighborhoods in Damascus. These strikes come amidst President Trump’s desire to limit the United States’ role in the Syria conflict.

Despite President Trump’s desire to withdraw the U.S. from global affairs and place “America First,” his tenure has been fraught with foreign policy controversies. While he has kept his campaign promises to withdraw from trade deals and tighten border control, the President’s actions in regard to other issues such as Syria have been contrary to previous remarks.