Cuomo and Nixon Vie for the Governorship, Future of the Democratic Party 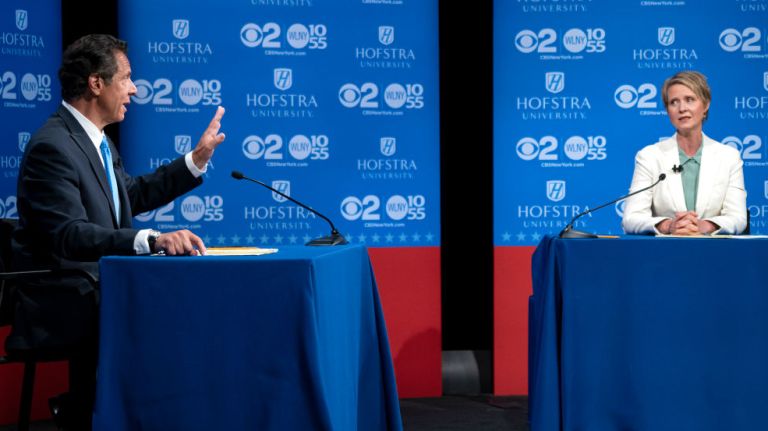 Following the surprise Democratic primary victory of political newcomer Alexandria Ocasio-Cortez over Joe Crowley, the fourth ranking Democrat in the House, an intense debate over the future of the party was ignited. Ocasio-Cortez’s win left political analysts wondering if her Democratic socialist message can appeal to voters outside of the most liberal districts in the country. This Thursday, September 13th, the New York Democratic primary for Governor offers the best preview of the struggle for control of the party, with two-term Governor Andrew Cuomo facing Cynthia Nixon, the activist and actress who is best known for her role as Miranda Hobbes on the show Sex and the City.

Cuomo, the son of former New York governor Mario Cuomo, was elected to the Governorship in 2010. During his tenure, Cuomo has had a complicated relationship with the progressive wing of his party. While he was lauded for signing the Marriage Equality Act and for championing some of the strictest gun safety laws in the country, many liberals in the state have bemoaned what they see as a lack of advancement of progressive causes in the state.  In announcing her candidacy, Nixon alluded to this frustration, questioning how New York, a state of such remarkable wealth, could be the most economically unequal statein the country. Nixon has made a host of progressive causes the cornerstone of her campaign, attacking Cuomo for failing to succeed in combating inequality and mass incarceration, and for not enacting single payer health care in the state.

At times, the race between Cuomo and Nixon has been an ugly one. During their first and only debate, the candidates exchanged barbs, each accusing the other of lying.  Last week the State Democratic party, which is supporting Governor Cuomo but is not directly affiliated with his campaign, sent out a mailer accusing Nixon of being anti-Semitic. “With anti-Semitism and bigotry on the rise,” the mailer says, “we can’t take a chance with inexperienced Cynthia Nixon.” The mailer incited considerable backlash from Democrats throughout the state, and the State Democratic party was forced to issue an apology for their message. Nixon, who is raising her children Jewish, called the mailer “an attack not only on my family, but on all New Yorkers.”

The primary race between Cuomo and Nixon represents the ongoing battle within the Democratic party over its direction. The Democratic base, increasingly disillusioned by a leadership that has left the party out of control of all three branches of government and in control of just 16 governorships, has pushed back against what they see as an out of touch establishment. If the unexpected success of Democratic Socialist Bernie Sanders in the 2016 Democratic presidential primary was a sign that the party was experiencing a challenge to the established order, Ocasio-Cortez’s shocking primary victory was a bullhorn. Now, Cynthia Nixon is hoping to ride this progressive surge to a primary victory, and then, she hopes, a victory in November.

It won’t be easy, though. Cuomo enjoys the advantage of being perhaps the most recognizable name in New York politics. He has stockpiled endorsements of the state’s most significant political figures, almost all of its unions, and the State Democratic Party. In a critical, yet supportive endorsement, the New York Times Editorial board endorsed Cuomo, trusting that he will “fulfill his potential as Governor” and knocking Nixon’s lack of governing experience. Perhaps it is no surprise, then, that Cuomo has enjoyed a lead of over 30 percentage points in most polls. It is quite possible that Thursday’s primary will go as expected, with Cuomo comfortably cruising to a third term. However, there is a very real possibility that Nixon will be victorious in what has been a string of successes for outsider, anti-establishment candidates of late. Such a result would send shockwaves through both New York state and the Democratic party as a whole.