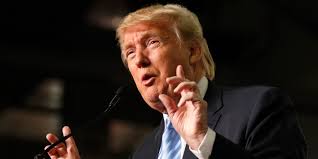 Disclaimer: the following article is satire, and it should not be taken as truth.

Today, veteran journalist Bob Woodward  joined the ranks of notable authors to publish tell-all books from inside the Trump White House. Woodward’s book titled Fear details explosive allegations of misconduct and delinquency against Trump and his aides, many of which are supported by audio tapes of interviews with White House staff. President Trump came out against the book on Twitter, calling it a “Joke” and “fiction,” while promising to take matters into his own hands and “write the real book” himself. 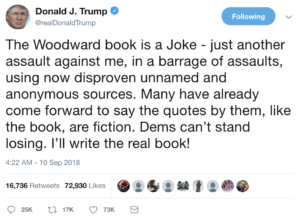 And so he did. The Vanderbilt Political Review obtained an exclusive preview of President Trump’s book from an anonymous senior staffer in the White House. The book is currently titled The Executive Papers: Why I Am the Greatest President Ever, and America Shouldn’t Trust Anybody But Me. Also, Bob Woodward is a Liar. We will continue to update this article throughout the day as we read through the book, but we already noticed several inconsistencies . First, the President correctly capitalized his title, which diverges from his tweet announcing the book. In his tweet, President Trump treated the word “joke” as a proper noun. Additionally, he even used a colon to introduce a subtitle. Before opening the book, it is clear that the President means business.

VPR advises caution in reading the following excerpt from The Executive Papers, as it is shocking and unnerving on several fronts. Trump writes:

“As I bade Chairman Kim goodbye and hung up the phone, I could not help but think about Vice President Pence, about whom I care so very deeply. He had been looking increasingly ill ever since his visit to the Center for Disease Control earlier that week. As he looked at me from across my desk, skin cadaverous and fever intensifying, he asked if I wanted a sip of his Diet Coke. I took several swigs, and thanked him for his generosity; after all, Diet Coke is the only drink that replenishes your body’s finite energy, proven to add one whole month to your life in every sip.”

The account is shocking for numerous reasons. Trump did not finish his sentences with prepositions, a common grammar slip-up he frequently commits. Additionally, his flawless use of a semicolon would make any third grade teacher proud. Even seasoned grammarians struggle with semicolons, so this passage exemplifies tremendous structural improvement by the President. He nailed the passage’s several proper nouns, only capitalizing when necessary, such as “Chairman Kim,” “Center for Disease Control,” and “Diet Coke”. If Woodward’s book was a step forward in literature about President Trump, The Executive Papers proves to be a massive leap.

Vanderbilt Political Review received another communication from an anonymous White House senior staffer, who claims that President Trump did not actually author The Executive Papers. Our source tells us that the book, which has already received 200,000 pre-orders on Amazon, was actually ghostwritten by the President’s wife, Melania Trump. The source claimed to have seen  her operating a tape recorder in rooms throughout the West Wing, including the Oval Office and communicate extensively with small-time publisher, Kreative Good Books (KGB). At this time, she has not responded to our numerous requests for comment.

First Lady Trump’s spokesperson finally responded to our inquiries, saying it is impossible for her to have written the book, as she has not been seen or heard from in the White House for over three weeks. While there is no official word from the White House on the identity of the imposter, we have received a tape of the ghostwriter’s communications with her publisher, KGB. In the tape, the ghostwriter cryptically stated in Russian that she has “more than enough for 2020.”

Russian President Vladimir Putin was arrested after trying to flee White House grounds, still wearing the shoulder-length brunette wig he allegedly donned for the past three weeks as he impersonated the first lady to gather quotations from senior staff for The Executive Papers. When asked why he came all the way to Washington D.C. to ghostwrite the book, he said he was simply “doing a favor for a friend,” and that he would “do the same for somebody who had done half as much for [him] as President Trump.”