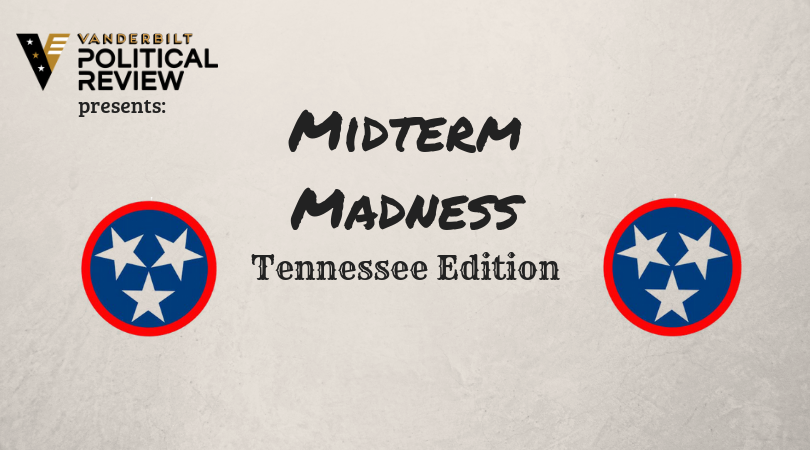 This article is part of an article series detailing and explaining midterm elections that are relevant to Vanderbilt students. It gives details on important races in Tennessee that Vanderbilt students should be aware of, from the race for the governor’s mansion to closely-contested races in the state house. If you’d like to have your voice heard in some of these races, take five minutes to register to vote at https://ovr.govote.tn.gov/. You have until October 9th to do so.

In the race for the governor’s mansion, both parties had wildly different primaries. In the Democratic primary, former Nashville mayor Karl Dean cruised to victory over Tennessee House Minority Leader Craig Fitzhugh. In the Republican primary, however, businessman Bill Lee got a surprise win against two well-funded and well-established opponents in businessman Randy Boyd and Congresswoman Diane Black.

The general election is between Karl Dean (D) and Bill Lee (R). This will be a tough uphill battle for Dean – had Boyd or Black won the primary, it could have created a divide in the Republican Party. But with Lee, the GOP have a regular conservative candidate that they can all unite around, making it hard for Dean to exploit any Republican division.

Dean was mayor of Nashville from 2007 to 2015, and was previously Nashville’s Director of Law under Mayor Bill Purcell. He was mayor during the Great Recession and the 2010 floods, and brought businesses to Nashville with tax incentives.

Lee is the Chairman of Lee Company, a business that his grandfather started, which specializes in plumbing and and electricity. He was named a “Most Admired CEO” by the Nashville Business Journal in 2015.

For their issue positions, find Dean’s here and Lee’s here.

There has only been one poll released since Dean and Lee won their nominations, a poll by NBC/Marist that has Bill Lee at 53% and Dean at 40%. Since there is only one poll to look at, and since polls are just snapshots of a race, expect it to get closer as we get closer to November.

The last updates on fundraising are from July, which showed that Dean raised $162,000 in the last period, while Lee raised $183,000. As of July, Lee has spent around $7 million dollars in the race overall, while Dean has spent $4.3 million. While Democrats usually are at a disadvantage with regards to fundraising in this red state, this is the best chance that Democrats have to retake the governorship in over a decade, when Phil Bredesen won re-election in 2006. Democratic donors in the state are spending their dollars, meaning that Dean has a better chance than past nominees.

Although Tennessee is considered a red state and has had only Republican senators since 1995, this year’s open seat race is different. It’s a result of the retirement of Senator Bob Corker (R), who has held this seat since 2006, when he narrowly beat out Democratic Rep. Harold Ford Jr.

Corker, a more moderate member of the Republican Party who has openly criticized President Donald Trump, has been lukewarm with his support for Republican nominee and sitting Rep. Marsha Blackburn (R). Blackburn, a firebrand conservative that is running on her support for President Trump, is facing off against former Mayor of Nashville and former Governor of Tennessee Phil Bredesen (D).

The contrast between the two couldn’t be clearer – Bredesen is a Democratic moderate that is well-liked by Republicans, while Blackburn bragged in her announcement video about being called a “wing nut” or “knuckle-dragging conservative” by those on the left.

The most recent NBC/Marist poll has Bredesen leading Blackburn by 2%, while the Real Clear Politics average for the race has Bredesen up by 1.3%.

Blackburn is counting on the 60% that backed Donald Trump in 2016 to back her, while Bredesen is counting on his reputation as a moderate to pull some Republican support and ride on however much of the “blue wave” comes to Tennessee. The strength of Bredesen’s candidacy combined with a favorable national mood could lead to the first statewide elected Democrat since… Governor Phil Bredesen, over a decade ago.

If you’re in Nashville, this is the race to watch. This is the only state house seat in Nashville that is held by Republicans, and since 1988 it has been held by Beth Harwell, the Speaker of the Tennessee House.

This district is usually safely Republican, but this year it has come into play. Mitt Romney won this seat by 23 percentage points, but in 2016, Hillary Clinton won it by 0.4 percentage points. In the Democratic Primary, Bob Freeman ran unopposed, while a contested Republican Primary saw Dr. Brent Moody emerge victorious over Vanderbilt alum Joseph Williams, 56%-44%.

The general election is between Bob Freeman (D) and Brent Moody (R). Freeman is a real estate professional who works for Forstar Group Inc. and co-founder of Freeman Applegate Partners, an energy consulting and sustainable construction firm. He is also the son of prominent Democratic donor Bill Freeman, who ran for mayor of Nashville in 2015 and considered a run for governor this year.

Moody is a skin cancer surgeon and dermatologist who has been practicing in Nashville since 2003.

Considering that there are no public polls of state house races, VPR isn’t able to comment on who is currently winning the race. If you want a certain candidate to win, help either Bob Freeman (link) or Brent Moody (link).

While this is a Knoxville district, the history of this seat makes this race one that you’ll want to pay close attention to. Running for re-election is incumbent Republican Eddie Smith, and he’ll face off against Democratic nominee and former state representative Gloria Johnson.

The election is between Eddie Smith (R) and Gloria Johnson (D). Smith grew up in East Knoxville, and before running for office he was Director of Events at Sevier Heights Baptist Church. Johnson is a retired Knox County school teacher, who educated special needs children.

Considering that there are no public polls of state house races, VPR isn’t able to comment on who is currently winning the race. If you want a certain candidate to win, donate to either Gloria Johnson (link) or Eddie Smith (link).