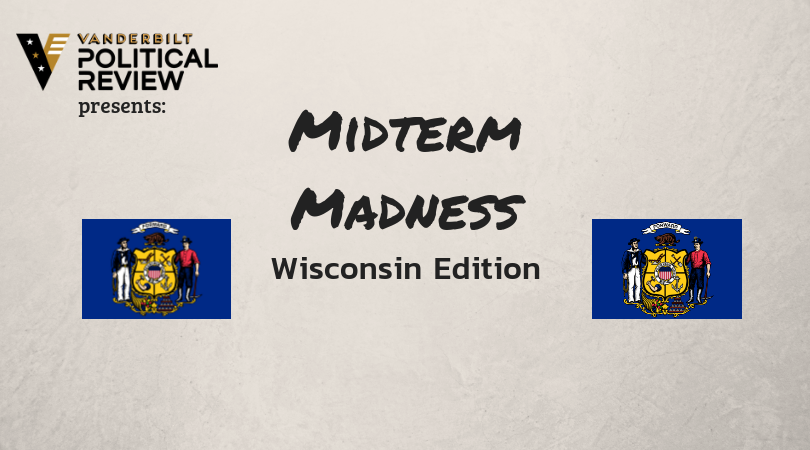 Shiva Sachdeva contributed to this article.

This week we take a closer look at the interesting races in Wisconsin, the state of cheese curds, rural swing voters, and a disenchanted, deeply segregated largest city of Milwaukee. Nationally, it’s a state that voted for the Democratic candidate in every presidential election since 1984, yet swung to Trump in 2016 after: a) Secretary Clinton failed to visit the state during her entire campaign, b) Milwaukee saw a decrease in voter turnout from 68% to 61%, and c) a black voter base that voted at a 55% clip in 2016 versus 74% in 2012. These factors (among others) were enough to give Trump a 23,000 vote win.

This cycle, there are three races of particular intrigue: Governor, US Senate, and retiring Speaker of the House Paul Ryan’s seat, WI-01.

Incumbent Republican (and short-lived 2016 presidential candidate) Scott Walker is up for re-election this year, as Wisconsin has four-year gubernatorial cycles. He was first elected in 2010, defeated a recall effort in 2012, and again won his race in 2014, making this the fourth time Walker has been on the ballot in eight years. That fatigue, paired with the Democrat-friendly environment, adds up to a difficult task for Governor Walker. He did not face a serious primary challenge.

In the Democratic primary, State Superintendent of Education Tony Evers arose from a crowded field of ten candidates. Evers earned 41.8% of the vote — far from a majority — with six of his competitors earning over 5% of the vote. His task is now to unite that disparate party base.

Scott Walker has been a polarizing figure in the state of Wisconsin after stripping state teachers’ unions of their collective bargaining rights (which led to the 2012 recall effort). This cycle, he is championing his university system tuition freezes, the landing of a Foxconn technology factory and offices in Southeastern Wisconsin that Walker claims will create tens of thousands of good-paying jobs, his elimination of the state property tax, and a historically low unemployment rate of 3%, according to the most recent Marquette Law School poll. His complete agenda can be found here.

Tony Evers is a relatively new face on the statewide scene, even at the age of 66. Although he held the seat of State Superintendent, as of Sept. 18, 31% of voters still had no opinion of Evers. This is compared to just 2% having no opinion of Walker. He is running on education reform, pledging to increase funding to the state school system, the university system, and the transportation system. His platform can be found here.

Walker currently has a 45% approve and 52% disapprove rating and is trailing in polls. The most recent MU Law poll has Evers at 49% and Walker at 45%. The two will debate for the first and only time on October 19th.

Wisconsin has a split Senate delegation, with Republican Ron Johnson being the senior member and Democrat Tammy Baldwin the junior. This cycle, Tammy Baldwin is defending the seat she won in 2012, rising from her position in the House, so this is her first defense of the seat. She faced no primary challenger.

Her opponent is Leah Vukmir, a state senator running for national office for the first time. She defeated Kevin Nicholson in the primary by a substantial margin. Kevin Nicholson was formerly the President of College Democrats nationally, but changed his allegiance to the Republican Party after returning from his service as a U.S. Marine. Despite being outspent, Vukmir won handily by earning the endorsements of every relevant Republican politician and dominating the deeply red Milwaukee suburbs.

Senator Baldwin is a notoriously good campaigner and communicator in the state of Wisconsin. She is running on a multitude of issues, including protecting the Affordable Care Act, combating the opioid epidemic that has rocked the state, and promoting American manufacturing. Additionally, she is the first ever openly LGBTQ senator. She has been a vocal critic of President Trump and has continued that tone on the campaign trail.

State Senator Vukmir is currently attempting to just get attention, with 32% of voters having no opinion of her. She has been trying to run as closely to President Trump as possible despite her lifelong connections to the more establishment wing of the Republican Party — former GOP Chair and White House Chief of Staff Reince Priebus and Speaker Ryan have endorsed her, but both are considered figureheads of the pre-Trump Republican party. As a former nurse, her main focuses are listed as health care, the Constitution, and military funding. She is also vehemently pro-life and has tweeted out support of the border wall with Mexico. It’s an interesting mix of traditional conservatism and Trumpism.

Senator Baldwin currently has an approval rate of 48% and a disapproval rate of 40%. She is currently leading in the most recent MU Law poll of likely voters 53% to 42%, and fivethirtyeight.com gives her over a 98% of victory. To be completely honest, Vukmir doesn’t stand much of a chance. Baldwin is very popular statewide, hasn’t done anything to lose the votes of independents, and very effectively motivates the Democratic base in the state. The question is: how much will Tammy Baldwin turnout buoy Evers in the gubernatorial race?

Following House Speaker Paul Ryan’s (R) announcement that he will not seek re-election after twenty years in office, Wisconsin’s First District has become heavily contested with large amounts of spending from both Democrats and Republicans. This coveted seat represents Southeastern Wisconsin: home to the newest Foxconn plant, a Taiwanese electronics manufacturer that received a $4 billion tax break in the district.

The Democrats nominated Randy Bryce, an ironworker, the current President of the Wisconsin Veterans Chamber of Commerce Board of Directors, and chair of the Democratic Party of Wisconsin Veterans Caucus, after he won sixty percent of the primary vote. On the Republican side, former Ryan staffer Bryan Steil, who serves as a regent for the University of Wisconsin, won the primary election with just over fifty percent of the vote.

Thousand, as of July 2018 as reported by the Federal Election Commission. While out-fundraised, Steil has earned endorsements from both former Speaker and current President Donald Trump.

Bryan Steil is currently slated to win, and is leading the polls by +6 (50% versus 44%) according to The New York Times. According to other political race trackers, the district still leans Republican even after Ryan’s retirement. Another factor helping Steil against the “Iron Stache” is Bryce’s criminal record, who as been arrested at least nine times. These charges include arrests for driving a vehicle under the influence of alcohol, for marijuana possession, and for being delinquent on child support payments. In previous elections, Speaker Ryan emerged victorious as the incumbent with over sixty percent of the general vote every cycle, a solid indicator for Steil’s future in the main election.
Steil’s platform can be found here, and Bryce’s can be found here.