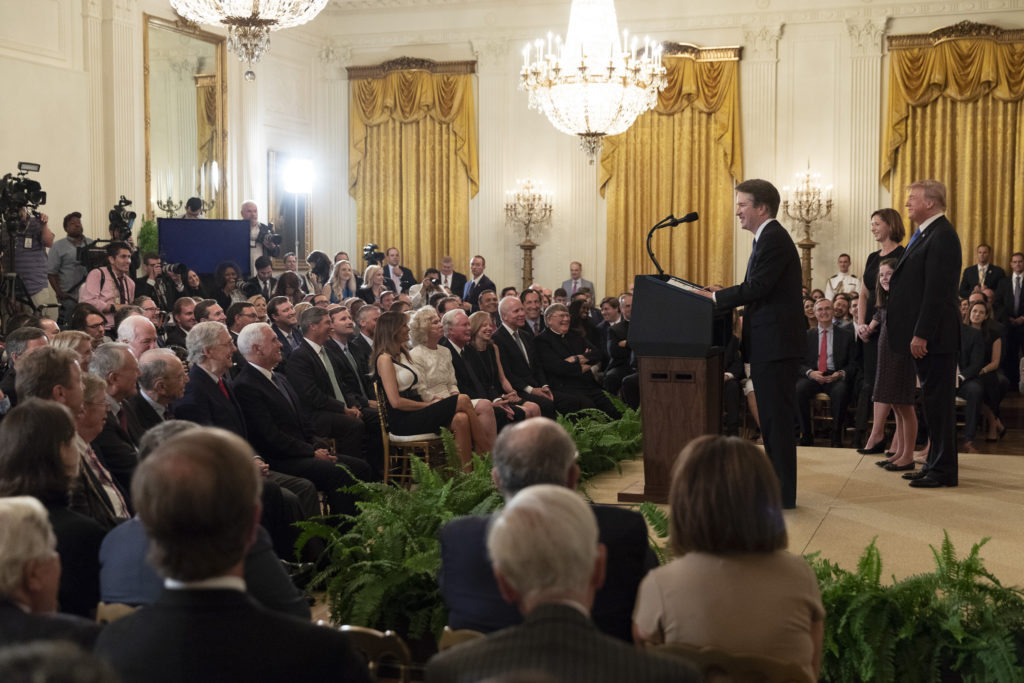 Last weekend, Judge Brett Kavanaugh of the U.S. Court of Appeals for the D.C. Circuit was confirmed by the  U.S. Senate as the next Associate Justice of the Supreme Court. Justice Kavanaugh will be replacing his former boss, Justice Anthony Kennedy, who retired from the position during the summer. From his nomination to his confirmation, Brett Kavanaugh’s path to joining the High Court was filled with controversy. His already-controversial judicial opinions, combined with numerous sexual assault allegations, made his confirmation the closest vote in 130 years. Here’s how it went down.

Ever since Donald Trump became President, it has been clear that a top goal of his has been to pack the federal courts with conservatives. When Justice Kennedy announced his retirement, Brett Kavanaugh’s conservative credentials vaulted him to the judicial shortlist; Kavanaugh is pro-gun, pro-life, and most importantly to President Trump, he is in favor of the expansion of Presidential power. He is also only 53 years old, meaning that his service on the court could last for decades. Kavanaugh offered those on the right the perfect option to replace Justice Kennedy – a committed conservative whose presence will likely alter the balance of the courts for generations to come.

Three weeks after President Trump nominated Kavanaugh, a psychology professor from Northern California named Dr. Christine Blasey Ford privately sent a letter to Senator Dianne Feinstein (D-CA) claiming that Kavanaugh tried to rape her in high school. After the letter’s contents were leaked, Kavanaugh immediately denied the allegations, and the White House refused to entertain the idea of withdrawing his nomination. On September 16th, The Washington Post released Dr. Ford’s name to the public in an interview where she said that while they were in high school, Kavanaugh pinned her on a bed, groped her, and tried to remove her clothes at a party. The Senate Judiciary Committee, under immense pressure from the public, scheduled a hearing where both Ford and Kavanaugh would have the chance to testify.

In the days leading up to the hearing, two new sets of allegations came out to the public. One was submitted by Deborah Ramirez, a classmate of Kavanaugh’s at Yale, who asserted that he exposed himself and rubbed his genitals in her face while drunk at a party. The second, released by Stormy Daniels’ lawyer Michael Avenatti, claimed that Kavanaugh and his friends were seen at several parties spiking drinks and participating in “gang-rape.”

On September 24th, Dr. Ford appeared in front of the Senate Judiciary Committee to testify on her allegations against Judge Kavanaugh. Ford offered an extremely moving testimony, one she stated emphatically she never wanted to give, but did because she felt it was her “civic duty.” The Republicans, using Arizona sex crimes prosecutor Rachel Mitchell as their intermediary, were unsuccessful in detracting from Ford’s credibility. Her assured responses to questioning and the results of her polygraph test made her story difficult for the Republicans to refute.

After a brief recess, the body reconvened to hear Judge Kavanaugh’s testimony. He opened aggressively, stating that he was a man with a sterling reputation that never could have committed this crime. When questioned on his high school and college drinking habits, Kavanaugh brushed them off, and he was able to continually deflect questions from Democrats about the extent of his drinking. Kavanaugh also responded halfheartedly to a question about allowing an FBI investigation, saying he would cooperate without giving approval to the investigation. By not answering every question and choosing to often go on the attack against Democrats, Kavanaugh was able to leave the committee having made his own case for innocence.

As the investigation got underway, reports emerged that the White House was restricting the FBI’s access in their investigation, and the Trump administration was doing all it could to ensure the confirmation of their nominee.  By October 5th, it became clear that most senators would be voting on party lines, with two exceptions: Lisa Murkowski (R-AK) and Susan Collins (R-ME). Nays from both of them would have stopped Kavanaugh’s nomination, but in a highly-publicized speech on the Senate floor, Senator Collins announced that she would vote to confirm the controversial judge. Despite Senator Murkowski choosing to vote against Kavanaugh, it wasn’t enough to stop his confirmation.

At the final vote on Saturday, October 6th, Brett Kavanaugh was confirmed to the Supreme Court by a vote of 50-48. Senator Murkowski voted “present” to accommodate absent Senator Steve Daines (R-ID). Joe Manchin (D-WV) also broke with his party to vote to confirm Kavanaugh, but his decision was made after Senator Collins’ announcement ensured that outcome. Kavanaugh was sworn in by Chief Justice John Roberts and began hearing oral arguments this week.