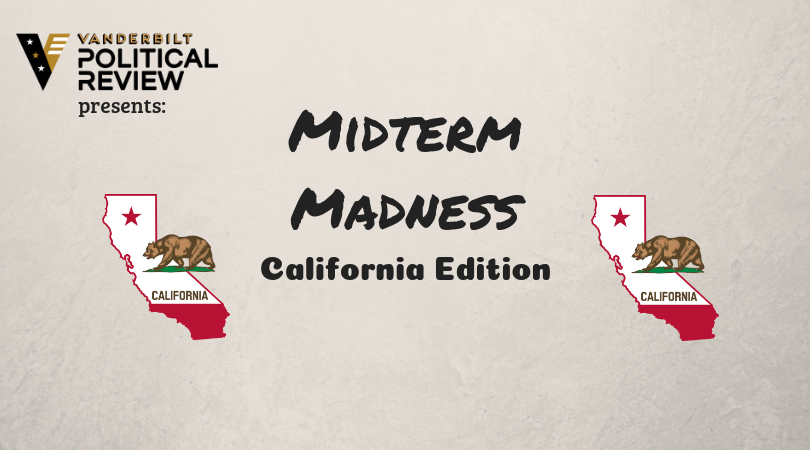 This article is part of an article series detailing and explaining midterm elections that are relevant to Vanderbilt students. It gives details on important races in California that Vanderbilt students should be aware of, from the race for the governor’s mansion to closely-contested races in the U.S. House of Representatives. While the Senate race pits two Democrats against one another, there are multiple House races that have the potential to flip seats, from Republican to Democrat. Additionally, the gubernatorial race pits a Trump-endorsed Republican against a seasoned California Democrat. For more information on all of the California House races, click here.

John Cox is and has been an accountant, businessman, broadcaster, and attorney. Coming from the private sector, he placed second behind Newsom in the June 5th nonpartisan blanket primary of California. For his platform, click here.

As is a common theme in California statewide elections, the Republican gubernatorial candidate is the underdog to the Democratic candidate. A Republican with the endorsement of Donald Trump, Cox is a significant underdog in this race. As of September 27th, the Public Policy Institute of California (PPIC) projected in its polls that Lt. Gov. Newsom is up 12 points on Mr. Cox. In their only debate before election day on November 6, Newsom denounced Cox as an “absolute Trumpist,” saying he is out of touch with the political beliefs of the majority of Californians. Cox also went on the offensive, pointing out that, under the Democratic governorship of Jerry Brown, there has been little progress in combatting poverty, homelessness, and affordable housing. He also attacked Newsom’s tenure as mayor of San Francisco, claiming that homelessness and drug usage rates had not wavered either during or after his tenure. In short, although this will likely be a blowout race, it has certainly been a contentious one.

As of September 27, incumbent Senator Feinstein is projected 11 points ahead of State Senator De León, according to PPIC. Since this race pits an incumbent U.S. Senator against a less-experienced opponent, it is to be expected that Feinstein firmly leads the polls. Although many consider Kevin De León to be a liberal firebrand and a good progressive candidate for the Democratic Party, Senator Feinstein has established herself as a prominent Democratic leader. Her reputation precedes her, especially in the wake of the controversial confirmation hearing of Supreme Justice Brett Kavanaugh. Senator Feinstein will most likely win this race.

Mimi Walters is a new and driven Republican member of the U.S. House of Representatives. Since she was elected in 2014, she has attempted to promote lower taxes, job creation, and fiscal responsibility. Most notably, she voted to repeal the Affordable Care Act in 2018. Prior to her election to the House of Representatives, Walters served as the mayor of Laguna Niguel from 2000 to 2004. She also served as a California State Senator from 2008 to 2014. For more on Walters’ platform, click here.

Katie Porter has been a prominent consumer advocate for over twenty years, fighting the negligence of financial institutions in the wake of financial crises. She was one of the first to point out the unethical practices of banks leading up to the housing crisis of 2008, and in 2012 she was appointed by then-attorney general Kamala Harris to be a watchdog against poor business practices by banks. For more on her platform, click here.

According to multiple polls, Katie Porter is projected 7 points ahead of Congresswoman Walters. Some polls project Porter only 1 point ahead of Walters. This will be a very close election for a key California seat, especially as the Democratic party tries to win back a majority in both houses in order to combat the political objectives of President Donald Trump.

Congressman Rohrabacher is a veteran member of the House, seeking his 16th term. An Orange County native, Rohrabacher has represented California’s 42nd (1989-1993), 45th (1993-2003), 46th (2003-2012) and 48th districts (2013-present). He has consistently won reelection with a libertarian, small-government platform. Before becoming a congressman, Rohrabacher was a folk singer and political activist on behalf of the libertarian group Young Americans for Liberty. Additionally, he worked as a speechwriter for Ronald Reagan in 1981. Recently, Congressman Rohrabacher has received criticism for voting for the American Health Care Act (AHCA), and for his controversial ties to Vladimir Putin and Russian intelligence units. For more on Rohrabacher’s platform, click here.

Harley Rouda is a real estate executive and Orange County native, and a former registered Republican. He is running as a Democrat, and his platform plainly attacks Rohrabacher and his ties to Putin and Donald Trump. For more information on Rouda and his platform, click here.

As of October 4, numerous polls, including those by UC Berkeley and the New York Times, project Rohrabacher and Rouda as tied at roughly 45-48% apiece. This is a vital election for both parties, as Orange County is traditionally a Republican county, and Rohrabacher has been an established incumbent in the Republican party for over a decade.