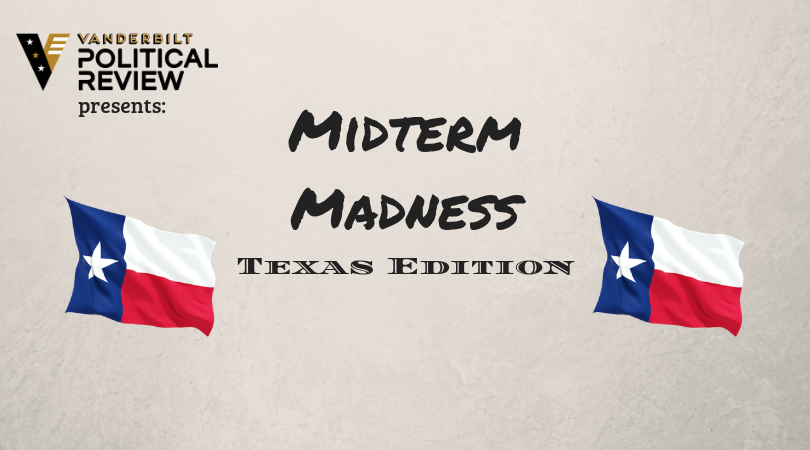 In this race, incumbent Governor Greg Abbott (R) is being challenged by former Dallas County Sheriff Lupe Valdez (D). Abbott won his primary with 90% of the vote and is favored heavily to win the election, while Valdez secured her nomination in a runoff against Andrew White, son of the former Governor. Valdez’s candidacy is particularly notable because she is the first Latina and the first openly gay person nominated for Governor by a major party in the state.

Abbott is running on traditional conservative values: protection of individual liberties and the Constitution, limiting the size of the Federal Government. He is relying on the largely red partisan makeup of the state–a strategy that has been successful for him based on polling. He’s also a Vanderbilt Law grad, and served as Texas Attorney General for years before becoming Governor. Valdez, on the other hand, served in the military before she was elected to be Sheriff.

In short, Abbott is winning. Cook Political Report has predicted this seat to be solidly Republican, and as an incumbent Governor he has the advantage. He is consistently polling ten points or more ahead of Valdez. Though many Texas progressives saw Valdez as a beacon of hope and potential inspiration for Latino voters, she has received some pushback from more left-leaning political organizations for her policy choices as Sheriff, including several incidents in which Valdez was deemed resistant to immigration and criminal justice reforms. And in Texas, she’ll have a hard time making up for lost ground with Republican and independent voters.

Beto O’Rourke (D), an El Paso native and House member representing the 16th congressional district of Texas, is challenging one-term incumbent Ted Cruz (R). This race is one to watch in part because of Cruz’s high-profile first term in the Senate, but also because he’s facing a qualified challenger and the race is turning out to be much closer than expected.

Cruz has most often landed on the far right of the political spectrum with his policy positions and Christian conservative beliefs. O’Rourke seems to take the opposite track; he’s outspoken and left-leaning on controversial issues, such as prison reform and racial profiling. He’s running a grassroots campaign, and has more than doubled Cruz’s fundraising numbers in donations from individual contributors, boasting that his campaign is funded by “people, not PACs”. Surprisingly, he has managed to hold his own and the race remains a close one.

The easy bet is Cruz–Texas is still one of the most red states in the union, and hasn’t elected a Democrat to the Senate since 1993. Cruz is an incumbent backed by the GOP and several key PACs, but for a few weeks, it looked like O’Rourke was closing in. One poll conducted by Public Policy Polling had O’Rourke only four points behind Cruz, well within the margin of error, while others place him further behind. O’Rourke is generating national media attention and galvanizing minority voters in Texas. However, as we get closer to the election, Cruz is pulling ahead. This race is still an uphill battle for Democrats, but Cook Political Report recently switched this state from the “Lean Republican” column to the “Toss Up” column, indicating that O’Rourke has a fighting chance. As for Cruz, Congress’s low approval rating, coupled with negative media coverage of the 2016 presidential election, may not be helping him in this campaign. There is still the problem of the state’s makeup. On average, Republican voters have higher turnout rates and larger numbers than Democrats, and there’s little indication that will change in this election. Ted Cruz will most likely remain in office.

Despite this, Beto O’Rourke’s relative success in this race is definitely notable. There are a number of factors that may contribute to this–shifting demographics of the state, potential new voter mobilization, and the predicted democratic wave of the 2018 midterms. However, it is impossible to ignore that O’Rourke’s campaign has been very effective. He has visited every county in Texas to speak and hold town hall meetings, and his advertising is all filmed on an iPhone. He may just be a rare, strong Democratic challenger in this red state, but he’s begun to make a name for himself on the national stage.

This district includes the northeast suburbs of Dallas, and the seat has been held by the Republican incumbent since 2002.

Pete Sessions (R) is being challenged by civil rights attorney Colin Allred (D), and this race is turning out to be a close one. Allred is a former Tennessee Titan, and emphasizes the desire to bring “North Texas” values to Washington, while Sessions harps on the success of the economy under a Republican president and Allred’s alignment with leaders on the left.

The polls are close- Cook Political Report has this race classified as a toss-up.  Sessions has incumbency advantage as a Republican in a red state, but Allred is an exciting candidate and has managed to maintain close polling numbers. This race is too close at the moment to make a prediction.

This district includes a strip of North Texas, and includes Northern parts of Austin up to Temple.

Incumbent John Carter (R) is challenged by Mary Hegar (D). He’s held the seat since 2003. Hegar is a veteran of the Air Force, a teacher, and an activist for the advancement of women in the military. Carter is facing more of a challenge than expected in this district.

The race is still solidly in Cook Political Report’s “lean Republican” column, but for a county that voted overwhelmingly for Trump in 2016, Hegar has made a name for herself. Most likely, Carter will keep his seat based on the partisan makeup of the county, but Hegar is an interesting candidate to watch.