Progress on the Agenda at K.C. Potter Center Anniversary 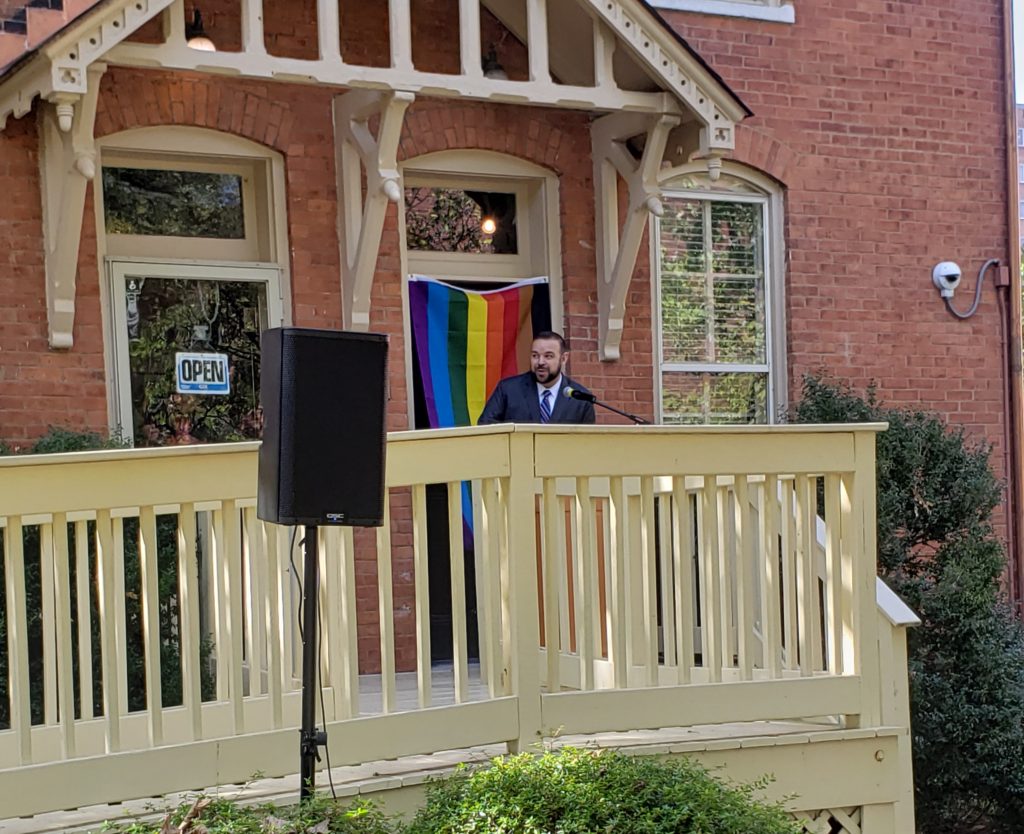 This past Wednesday marked the 10th anniversary of Vanderbilt’s K.C. Potter Center, which houses the Office of LGBTQI Life on campus. The building is named for K.C. Potter, who as Dean of Residential Affairs drastically improved Vanderbilt’s inclusivity towards LGBTQI students. This included allowing Lambda, Vanderbilt’s undergraduate LGBTQI club, to meet at his home on West Side Row before he retired in 1998 and the building was constructed. The center held a small gathering to celebrate its first ten years in operation.

The Director of Vanderbilt’s Office of LGBTQI Life, Chris Purcell, gave a brief address in front of the building to commemorate the occasion. He began by thanking Dean Potter for his contributions and his continued support. Purcell also acknowledged Roberta Nelson and Jacob Goedde, the two other staff members in his office for their hard work in developing the wonderful programming for LGBTQI History Month.

On the center, Purcell remarked, “I know our community feels this place as a true sense of home.” He continued, “We go out day after day to fight to exist and for a true equitable experience at Vanderbilt. Today we honor the many students who have been advocates for themselves and their communities over the years.”

All members of the community are quick to shower the K.C. Potter Center with praise. For those in the often marginalized LGBTQI community, the center serves as a safe space for affirmation and support. It is critical in serving as somewhere students can feel reassured and empowered in their identities.

Before his remarks, Purcell gave some policy-related insight on what the future holds for the Office of LGBTQI Life. After the Trump administration’s recent statements regarding the definition of sex, Purcell has committed himself to ensuring that Vanderbilt remains a community that is open and safe for transgender and non-binary students. He has also been working with Vanderbilt to ensure the new buildings being constructed make appropriate accommodations for LGBTQI students.

Purcell also touched on the importance giving people at Vanderbilt the assistance they need to be more inclusive towards the LGBTQI community. This includes programs like the allyship training and support training sessions provided by the Office of LGBTQI Life. In today’s climate, it is critical that people receive the support they need to be good allies to non-heterosexual and non-cisgender students and faculty members. Their office will also be hiring a fourth staff member to help expand their community programming.

Going forward, the next big goal for Purcell and his staff is to address the nature of Vanderbilt’s curriculum. Having an inclusive curriculum can go a long way in helping LGBTQI students feel less isolated. To Purcell, this is a feasible and logical next step that the university can easily take.

In the face of hateful rhetoric and regressive policy, Purcell vowed to continue fighting for marginalized students, stating emphatically, “We aren’t done yet. Until LGBTQI folks can live without discrimination, persecution, and fear we will persist in our mission.”