In The Wake Of Kavanaugh Hearing, Anita Hill Visits Campus With A Message Of Justice And Empowerment 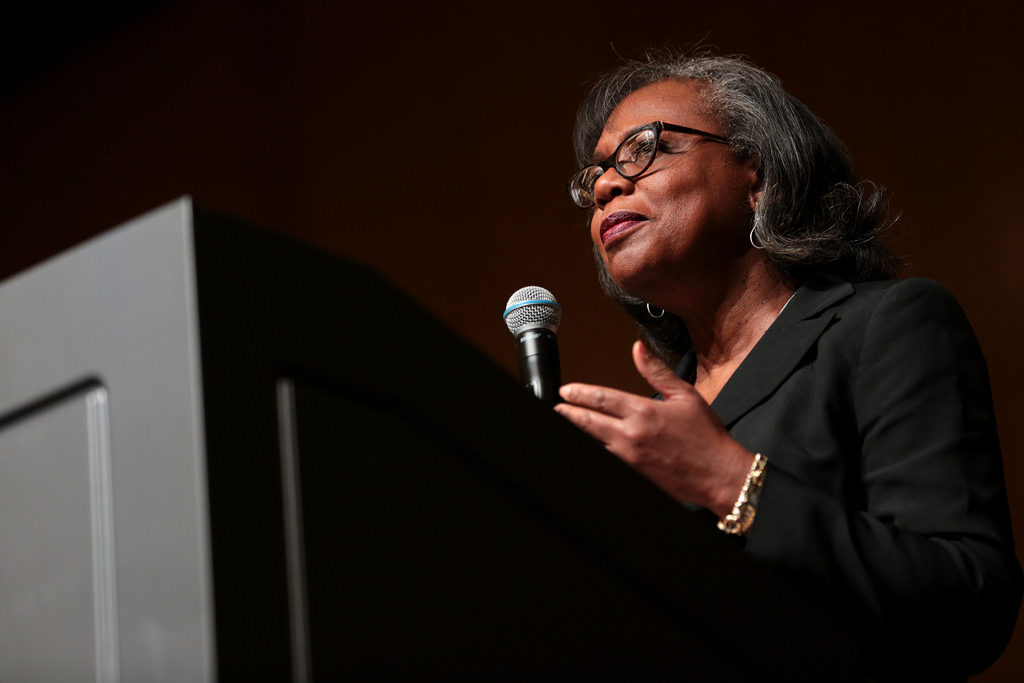 After the growth of the #MeToo movement caused a mass reflection on how many men in positions of power continue to act inappropriately around women, the events of Clarence Thomas’ 1991 Supreme Court confirmation hearing gained a newfound relevance. Thomas’ hearing was defined by the sexual misconduct allegations levelled against him by Anita Hill, an attorney who had worked for Thomas at the Department of Education and the Equal Employment Opportunity Commission. In front of the nation, Anita Hill accused Thomas of sexual harassment and having behaved in a manner “that [was] unbefitting an individual who [would] be a member of the court.” Despite Hill’s testimony, Justice Clarence Thomas was confirmed to the Supreme Court, where he has served for 27 years.

As the #MeToo movement caused many powerful men to feel the consequences of their misogynistic conduct, people began to look back at how Anita Hill had been treated in the wake of her testimony. It seemed, in the eyes of many, that she had been unfairly attacked and silenced despite the credible accusations she had made against her former boss. Just weeks ago, another contentious Supreme Court confirmation centered around allegations of sexual misconduct, as Brett Kavanaugh’s nomination was nearly derailed by an accusation of sexual assault by Dr. Christine Blasey-Ford. Just as Anita Hill had done in 1991, Dr. Blasey-Ford testified in front of the Senate, painstakingly recalling her own sexual assault. All too similarly to the Hill testimony in 1991, the Senate largely overlooked Dr. Blasey-Ford’s claims, confirming Justice Kavanaugh to the court.

It is within this larger context of the #MeToo movement and Justice Kavanaugh’s confirmation that Anita Hill headlined Sunday’s conference focusing on underrepresented narratives of sexual assault. Hosted by the Vanderbilt Sexual Assault Awareness and Prevention Committee and entitled “No Longer Silent,” the conference featured speakers from Hidden Dores, the Association of Latin American Students, the Student Health Center, and Lambda, the LGBTQ student organization. In her keynote address at the conference, Attorney Hill related her 1991 experience not only to the history of sexual assault in the United States, but also to today’s current political climate and the recent Kavanaugh controversy.

Hill powerfully began her speech by discussing three historical survivors of sexual assault who were pioneers in speaking out about their experiences and against their accusers. Hill highlighted the overlooked fact that all three of these women were African American, detailing the experience of Mechelle Vinson, a 19-year-old who had been raped by her boss as many as 60 times. It took eight years for the Supreme Court to decide that she experienced a violation of her Civil Rights.

Hill then launched into a description of the statutory beginnings of protection against sexual violence in the workplace and in schools, stating that such protection had clear roots in Civil Rights laws. While these historical statutes cover a range of behaviors, they have resulted in confusion over what defines sexual assault or rape, and whether or not responsibility should be placed in the criminal justice system or in the hands of the educational institution. Hill strongly responded to this confusion by saying that schools always have a responsibility to address sexual violence on campus. Her statement was returned by an uproar of applause from those in attendance.

After solemnly reminding the audience that the suppressed stories of sexual assault survivors in the 60’s led to a generation of lost public recognition regarding said assaults, Hill circled back to the three African-American pioneers she began her speech with. Hill applied an intersectional framework to these early assault survivors and all those who came after them in an attempt to help the audience understand the obstacles they faced, including the ever-present stereotypes about the sexuality of women of color and the oversexing of women of color. Hill’s storytelling effectively showed the different ways in which women experience sexual assault depending upon victim identity; however, Hill pointed out, the same tactics are used across time, race, ethnicity, and class to silence women. These tactics, Hill explained, include framing women who choose to speak out as promiscuous, vindictive, or confused.

By describing the experiences of sexual assault victims throughout the latter half of the 20th century, Hill effectively painted a gruesome picture of how, though things have changed, they have not changed drastically. The Kavanaugh and Thomas hearings had eerily similar judiciary problems, including the refusal to call in experts on sexual harassment and the omission of key witnesses in the cases. Hill’s extensive use of her own experience and her juridical background sent one clear message to the audience: the stories of victims must be included in the policy-making regarding sexual assault. After using the assault of migrant farm workers as an example of the painstakingly long amount of time it has taken for the EEOC to take action (attributing much of these assaults to the compounding identities of these farmworkers being both migrant and women of color), Hill proclaimed to the audience, “You cannot make effective policies to protect people who you do not see. We are now seeing and we are now hearing, but make no mistake, folks, we are at a critical moment.”
“You cannot make effective policies to protect people who you do not see.”
Hill emphasized this critical moment to the audience of university students by stating, “Not even some of our best institutions seem to be able to come up with terms for how to confront what I believe is an epidemic problem, and a public crisis of sexual violence in so many places in which we exist.” Ironically, Chancellor Zeppos was absent from the event, despite reports that Vanderbilt has some of the highest sexual assault rates among colleges in the nation. Administrators present at the event included Cara Tuttle Bell, Director of Project Safe, Molly Zlock, Title IV, Coordinator Melissa Thomas Hunt, Vice Provost for Inclusive Excellence, and David Williams, Vanderbilt Athletic Director.

In the closing moments of Anita Hill’s speech, she warned students and attendees about the many ways in which institutions and the state can silence us, not only on the basis of gender, but on the basis of race, religion, ethnicity, and other qualities. She inspired students in the audience by urging them to move forward from the Kavanaugh hearing with action steps: ensuring the government hears, protects, and believes women about sexual violence, standing with survivors and rejecting becoming bystanders, removing government officials who abuse their power, and teaching others that sexual assault is not just a women’s issue.

One of the most powerful moments within Hill’s speech came when she discussed the inequity in treatment afforded to both Dr. Blasey-Ford and herself during their hearings. Hill spoke out to the audience, saying, “One of the biggest threats to democracy is the rationing of justice…Either justice is whole or it does not exist…Better is no longer good enough.” Her sentiments were echoed in the closing lines of her time on stage when she proclaimed, “I was, I am, and I always will be a catalyst for positive change. And we can all make that pledge.” In the days following Hill’s appearance at Vanderbilt, we can hope that sparks of positive change are ignited, the distribution of justice continues to equalize, and survivors are propelled into positions of power until everyone has a seat at the table.