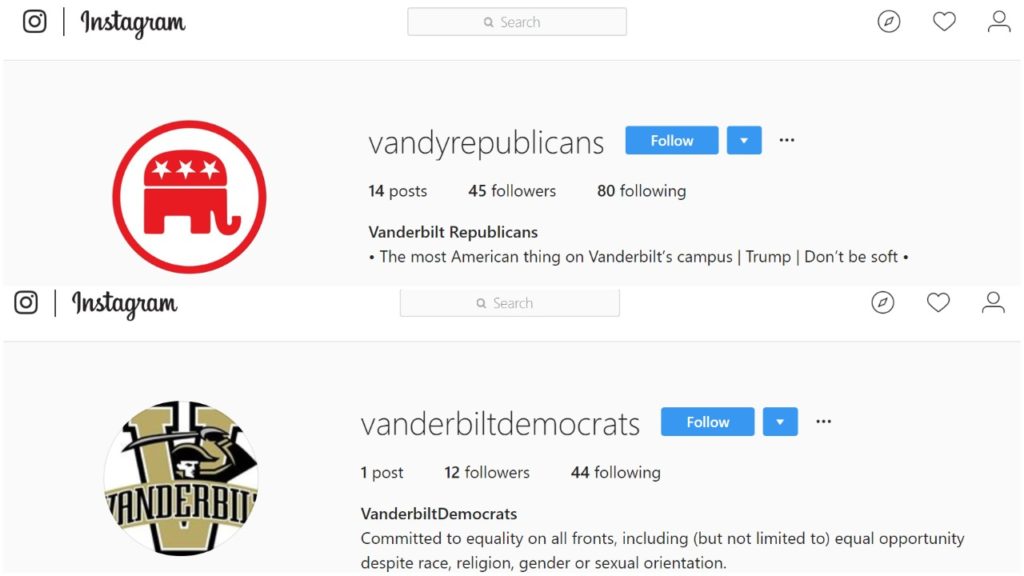 As Nov. 6th rapidly approaches, fake Instagram accounts are masquerading as representative of real student organizations under the handles of @vandyrepublicans and @vanderbiltdemocrats. While it is unclear who created these accounts, statements have emphasized that neither account is affiliated with the Vanderbilt College Republicans (VCR) nor the Vanderbilt College Democrats (VCD).

Of the two, the fake GOP account has been far more active in the six days since its first post. Included among the account’s fourteen posts are pictures of a Breitbart News headline and a photo of Kavanaugh accuser Dr. Christine Blasey-Ford with an emoji of a rat in the caption, among other inflammatory content. The fake account seems to cater to far-right views, praising President Trump, and aiming to mock Democrats.

Aiyappa Bollera, president of VCD, stated, “This past weekend, two fake Instagram accounts, @vanderbiltdemocrats and @vandyrepublicans, both attempted to follow numerous members of the Vanderbilt College Democrats and the Vanderbilt College Republicans. Some of the content on the @vandyrepublicans Instagram page is absolutely heinous and has absolutely no place on this campus. These accounts have no connection whatsoever to the VCD Executive Board and are in no way, shape, or form representative of the beliefs of our organization. We would like to unequivocally condemn the content published on these pages, and state clearly that they have absolutely no association with VCD.”

The @vanderbiltdemocrats account (not to be confused with the legitimate VCD Instagram @vandydems) has a single post: a photo of Senate Minority Leader Chuck Schumer and House Minority Leader Nancy Pelosi with the caption “The 2 best!!”

Both accounts have notable followers. Several members of the actual VCD body as well as the Instagram account of the Belmont University College Democrats follow @vanderbiltdemocrats. The @vandyrepublicans account has 14 followers affiliated with either current or former Vanderbilt Baseball players.

Shiva Sachdeva, the president of VCR, was quick to respond and to denounce the fake account. “The Instagram account @vandyrepublicans has no affiliation with the Vanderbilt College Republicans. I personally was unaware that this account existed until this weekend, and is in no ways tied to myself or anyone in the Executive Board of VCR. In no ways is the content posted on the account reflective of my personal beliefs, nor anyone on our Executive Board. Fake content and media, from all sides, is dangerous and toxic to our goals of facilitating collaboration and respect on Vanderbilt’s campus between Republicans and Democrats,” said Sachdeva.

Vanderbilt Political Review (@vanderbiltpoliticalreview) blocked both accounts on Instagram, a move taken by Social Media Director Grace Adcox. “I felt that blocking the fake accounts was the best way to avoid maligning VPR’s reputation,” said Adcox. “It was clear to me that these accounts did not reflect the actual characteristics or views of two important student political organizations on campus. It’s in our best interest as a nonpartisan journal to be critical of malicious sources that may be interested in influencing the Vanderbilt community through misrepresentation of a particular party’s views.”

The only shared follower of the two accounts is @mayfieldladies, which appears to be connected to the students residing in Mayfield 3, a Living Learning Community under Vanderbilt’s Office of Housing and Residential Education.

At this point, it is impossible for VPR to know the motives behind the creation of these accounts. Whether the motivation was political or just trolling, VPR denounces efforts to impersonate other political organizations, especially those that aid us in creating political dialogue on Vanderbilt’s campus. Honest and complete political discourse is necessary on a college campus, and this article will be updated as further information comes to light.