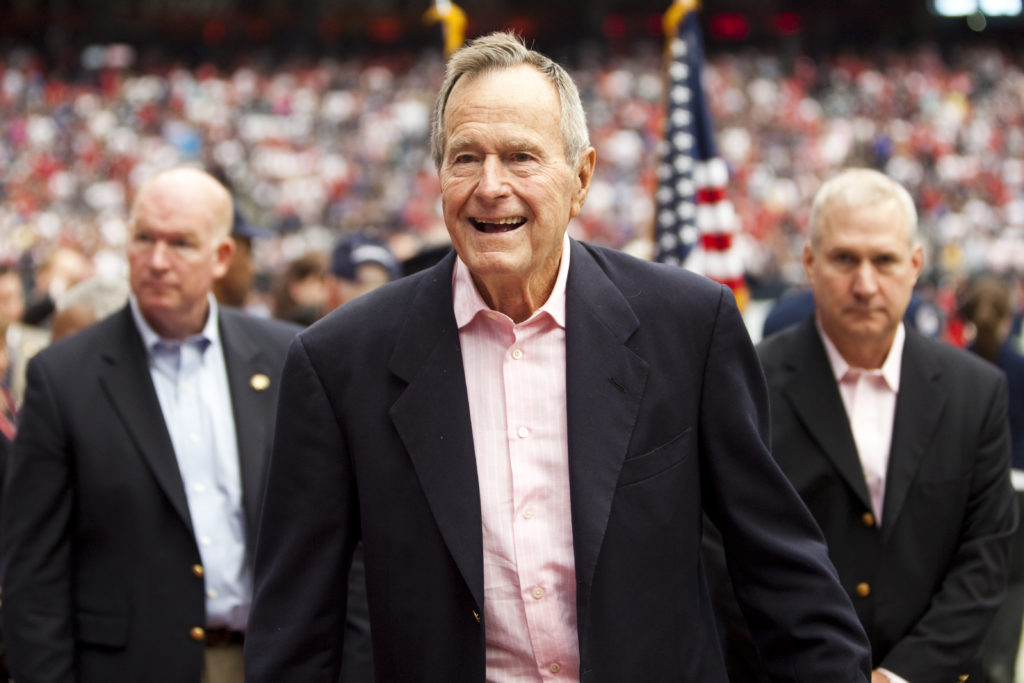 George H.W. Bush, former president and lifelong public servant, who went from being the youngest fighter pilot in World War II to leading the country through the end of the Cold War, died late Friday night at the age of 94. Bush, who was the longest living president in American history, leaves behind a legacy in public service unmatched by anybody, and will live on in the memories of both Republicans and Democrats, who admired his great dedication to his country.

George H.W. Bush dedicated his entire life to public service, beginning by joining the U.S. Navy on his 18th birthday. Bush would become one of the youngest fighter pilots in World War II, flying bomber missions over the Pacific. It was during one of these missions that Bush’s plane was shot down by Japanese forces. The sole survivor of his crew, Bush was rescued by the submarine USS Finback, after floating for four hours on an inflated raft.

After returning home, George Bush married Barbara Pierce, whom he would be married to for 73 years, until her death earlier this year. They started a family and raised six children including 43rd President George W. Bush, and former Governor of Florida Jeb Bush. H.W. Bush found success in Texas, where he would make his permanent home, founding an oil development company.

After achieving great prosperity in the oil industry, Bush began his long political career as chairman of the Harris County Texas Republican Party. A rising star, Bush would run for congress in 1966, winning the seat representing Texas’ 7th district. As congressman, he voted for the Civil Rights Act of 1968, breaking with the popular opinion of his district.

After losing a close election in the race for U.S. Senate for Texas, Bush was appointed Ambassador to the United Nations by President Nixon, serving for two years, before being appointed Chairman of the Republican National Committee. As Chairman, it was Bush who asked President Nixon to resign from the presidency.

George Bush would spend the rest of the 1970s in various important positions, including Chief of the U.S. Liaison Office in China and Director of the C.I.A.

Bush first decided to run for President in 1980 but lost in the primaries to Ronald Reagan. After a strong run, he was chosen by Reagan to become the 43rd Vice President of the United States.

Following the popularity of the Reagan Presidency, George Bush won the presidential election in 1988 against Democrat Michael Dukakis, winning 40 states and 54% of the popular vote.

Bush’s presidency was defined by his strong leadership in foreign affairs. During his first and only term, Bush ordered successful invasions in both Panama and Kuwait, demonstrating the United States’ opposition to dictatorships across the globe. Bush also helped guide the US through the end of the Cold War, further easing US-Soviet relations, and successfully pushing for the reunification of Germany.

During his presidency, Bush also signed the Americans with Disabilities Act, which prohibited discrimination based on disabilities and required accessibility requirements in public spaces.

Bush would lose re-election in 1992 to Bill Clinton, following a broken promise on raising taxes. The election was marked by the third-party candidacy of Ross Perot, who many believed cost Bush the election. Bush retired to Houston, Texas, where he would live for the rest of his life.

In his post-Presidency years, George H.W. Bush saw his sons George and Jeb become successful politicians. Jeb Bush was elected Governor of Florida in 1998, and George W. Bush was elected President of the United States in 2000. He also developed an unlikely friendship with his successor, Bill Clinton, who he worked with on raising funds for relief efforts after the 2004 tsunami in the South Pacific.

Bush spent his retirement in Texas, often visiting his Presidential Library at College Station. On his 80th, 85th, and 90th birthdays, he celebrated by skydiving; a tradition he kept even while confined to a wheelchair.

George H.W. Bush will be remembered as one of the most dedicated public servants this country has ever seen. His leadership during some of the most important moments in US history will forever be etched in the minds of those who lived through his presidency. Relevant to American politics today, Bush once said “I do not mistrust the future; I do not fear what is ahead. For our problems are large, but our heart is larger.”