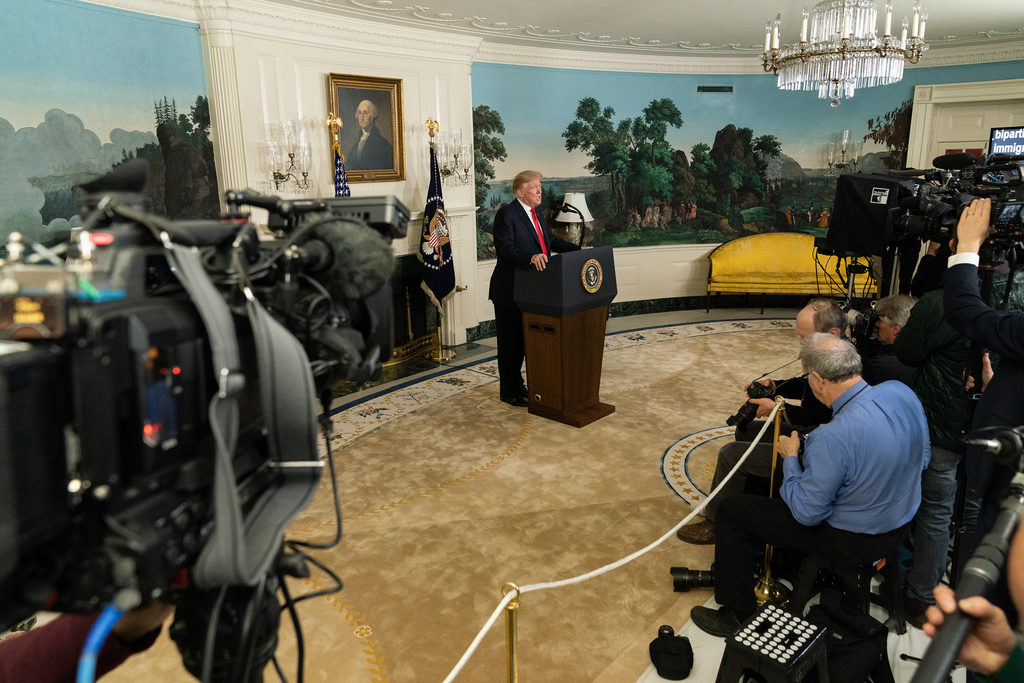 The most recent government shutdown, which began on December 21, 2018 and continued until January 25, 2019, was the longest in U.S. history and left 380,000 U.S. government employees without pay. Now, the government has temporarily reopened to allow for negotiations to take place, but many have their doubts about the success of these efforts. With conflicting declarations made on both sides of the issue, and the February 15th deadline fast approaching, it seems that compromise may not be possible.

The President is seeking $5.7 billion to fund the wall, and has threatened to declare a state of national emergency in order to get it. Speaker of the House Nancy Pelosi has stated firmly that there will be no funding for a wall in any deal Congressional Democrats might agree to. These broad declarations put the credibility of these politicians at stake. Trump’s continued refusal to compromise has in many ways backed him into a corner: to give up now would be to abandon his campaign promise or to admit that he’s not capable of keeping that promise. He has referred to furloughed employees as “Patriots” for their sacrifice for the sake of the nation. The same is true for Pelosi–she has stuck to her refusal to compromise on the wall. All of this makes a resolution within the next two weeks seem implausible. “Aside from the leadership, the top priority for House and Senate members on both sides right now is preventing another shutdown,” Vanderbilt Political Science Professor Bruce Oppenheimer commented. If consensus is possible, it must be reached soon.

If President Trump manages to get the funding he needs, the wall’s construction poses a larger financial problem. The requested $5.7 billion would most likely not cover all the costs of a wall, and would only be appropriated for this fiscal year. “We have no idea how much something like this would cost,” Professor Oppenheimer added, “From eminent domain issues to construction costs of a border wall, the cost of this could be astronomical. We just don’t know.”

Many government employees facing another potential period of furlough feel caught in the middle. Lisa Arnold, an attorney at the Justice Department, expressed her frustration about this. “The prospect of yet another shutdown only adds insult to injury for federal workers, who see little connection between their important work on behalf of the country and the border security dispute. In fact, these shutdowns directly undermine many of the stated goals of the border security debate, as they result in the furlough of people whose job is to enforce our immigration laws in the first instance.” For many workers who rely on regular paychecks to pay rent or provide for their families, anxieties are high. The shutdown also had an effect on larger agencies, like TSA and the FDA, which play integral roles in maintaining the safety of American citizens. The most recent shutdown was incredibly costly, costing the U.S. between $3 and $11 billion in GDP. Another government shutdown would further exacerbate these devastating effects.

Despite the temporary reopening of the government, very little progress has been made in negotiations. I reached out to Philip Rucker, the White House Bureau Chief at the Washington Post, to get his take. “The House and Senate leadership has appointed a conference committee made up of rank-and-file members to negotiate border security funding, but there is little willingness on either side to compromise. Democrats view a border wall as immoral and ineffective, while Trump has not come down from his demand for $5.7 billion for the wall. It’s hard to see how the two sides meet in the middle on this one,” he commented. Declaring a state of national emergency would allow President to reallocate funds for his purposes, an action well within his Constitutional rights, though there may be a problem with precedent-setting. Marco Rubio has come out against the use of a declaration of emergency to resolve this problem, arguing that Democrats could one day do the same for an issue like climate change. However, these warnings don’t seem to have an effect on the President. “Trump is determined to build a wall and fulfill his signature campaign promise,” Rucker added, “and without majority support for the wall in the House, he sees a national emergency declaration as his only option.”

Professor Oppenheimer spoke more about the political sentiment behind this issue: a generally unfavorable view of immigration. “From a purely economic standpoint, we shouldn’t be building walls. We should be encouraging legal immigration. We have an aging population and increasingly low birth rates, which poses a problem for Social Security. Though there isn’t a lot of support for the wall, the general view of immigrants in this country is a problem.” The debate over the wall seems to be emblematic of the divisions in this country surrounding immigration, and it’s coming to a head on the national stage.

Despite Congress’s work toward compromise, President Trump seems to be determined to achieve his goal, and willing to do anything to get there. As for what may happen on or before February 15th, it is hard to make any clear determination. When I asked what he thought may happen in the next two weeks, Professor Oppenheimer said that there was no way to know. “Trump is predictably unpredictable.”