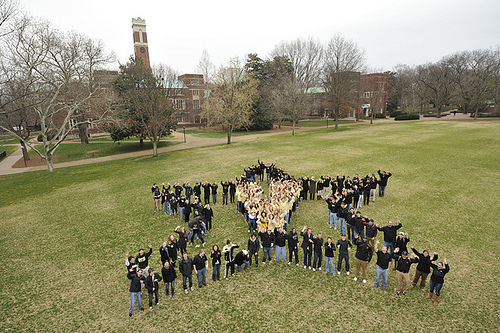 On Saturday, February 9, Hidden Dores constructed a Tunnel of Oppression on the third floor of Buttrick Hall. Several scenes were displayed, created in partnership with other campus organizations. The rooms depicted the perspectives of several oppressed groups on campus: First Generation students, immigrant students, LGBTQ+ students, and women. First in the immersive experience was a room about the oppression faced by First Generation students, with a story written from the perspective of a First-Gen student at Vanderbilt meant to personalize the experience. Next came a room about the immigrant experience, including harrowing sounds from child-field detention centers and Orwellian news clips about the “immigrant crisis”. One of the most impactful experiences came from a women’s rights centered room where the story of a woman trying to get an abortion in Tennessee was told, which showed the often overlooked emotional, financial, and physical toll of the process. At the end of the tunnel, a light emerged: a reflection room to unpack and engage in dialogue about the issues highlighted in the program closed out the experience, bringing hope of a better future on campus.

Nico Gardner, a member of the executive board of the Association of Latin American Students (ALAS), helped put on the event. He offered this comment, “Hidden Dores organized the #TUNNEL in order to teach the public about the often abrasive and oppressive experiences that marginalized communities have to face. The #TUNNEL consisted of different rooms of scenes, interactive displays, audio presentations, and debriefing rooms to bring to life the experiences of marginalized groups in a way that is accessible and impactful.”

Jacob Pierce, the current president of the Multicultural Leadership Council, described his experience going through the Tunnel. “It was an interactive experience for participants to learn about the stories and experiences of marginalized groups across the country and across campus,” he explained. Jacob learned more about the experience of LGBTQ+ students, first generation students, immigrants, and women during his walk through. “I was presented with LGBTQ+ facts about violence, legal challenges,” he said. “It put things in stark, empirical terms which I think really underscored the gravity of all of these issues.” Jacob talked about how easy it is to see oppressed groups as statistics or numbers, but how the Tunnel helped to bring out the humanity in the harm: “These are people’s lives,” he said.

When asked, Jacob explained why he thought Hidden Dores chose to hold this event he responded, “so they could have an impact on people and illuminate these stories and experiences.” He went on to explain how it has become the norm to talk about these socio-political issues throughout the lens of “who’s this going to help, who’s this going to hurt.” Jacob lamented the loss of the intrinsic humanity behind these issues. “There are people behind all these news stories,” he reminded me. “I think the point was to inspire action and raise public consciousness about these issues.”

Jacob hoped this event would affect campus in a monumental way. “A willingness to engage in uncomfortable dialogue, and being able to call people out when they say racist, homophobic, bigoted things,” were the things that Jacob saw as the effects of the Tunnel.

The entire project served to display the twisted way national discourse has framed these issues. When we see these issues on screens or through the words of news anchors, we are displaced from them entirely. For example, most men can’t describe to you the experience of pursuing an abortion because they have, obviously, never had to do so. Perhaps this is why we have such trouble empathizing with one another; we do not, or refuse to, see through the eyes of others. While this may be a symptom of a larger issue, the answer Hidden Dores hoped to provide is clear and effective. By seeing, acknowledging, and understanding the issues faced by those around us, we can become better friends, citizens, and people.