“There’s not really a place for me politically.” — Meghan McCain at the Chancellor’s Lecture Series 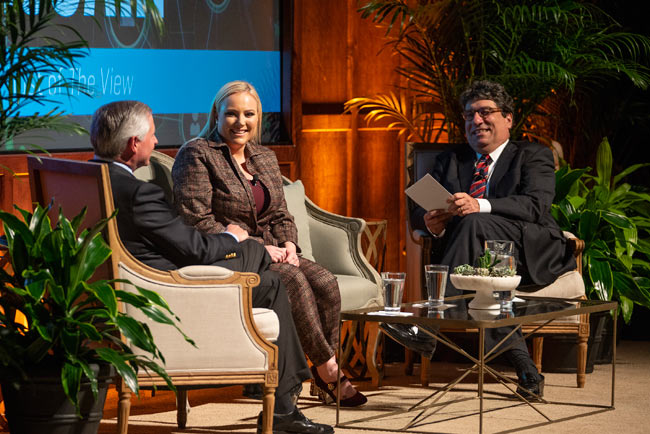 In a half-full Langford Auditorium, Meghan McCain joined Jon Meacham and Chancellor Nicholas Zeppos for the latest installment of the Chancellor’s Lecture Series. McCain is a co-host of The View, a political analyst for ABC, and the daughter of longtime U.S. Senator John McCain. Zeppos and Meacham entered first, followed by McCain, wearing a beaming smile.

“I need a hug. Jon was my first boss!” McCain exclaimed before embracing the Pulitzer Prize-winning author.

“I’m responsible for all the good things,” Meacham quipped, always at home on a stage.

After some lighthearted reminiscing about McCain’s early days at Newsweek with Meacham, Zeppos began his night-long exercise of turning his guest into a surrogate for her father, Senator John McCain.

Zeppos inquired, “Can you talk to your father’s temper a bit? You said you were angry, how much of the anger was channeling him and how much was you?”

She responded by saying it was difficult, but that her father was there with her during the eulogy. It was a touching moment made possible by Zeppos’ leading question.

At times it was difficult to tell who the guest was: Meghan or her father. He asked about the the maverick role that her father held in Washington and whether it makes her angry that nobody has filled that void. He asked how she felt when McCain defended Obama’s morality and decency in the face of a racist town hall question. He even asked about the senator’s legacy of campaign finance reform, one of her father’s flagship issues which culminated in the McCain-Feingold Act of 2002. Meghan McCain was still in high school in 2002.

She navigated the questions well, but you could tell she wasn’t really sure how to respond before conjuring an appropriate story to tell. It was awkward.

Eventually, the conversation moved more toward Meghan McCain’s perspectives the issues driving politics today, her experiences as a “token Republican” on “The View,” and her time on the liberal campus of Columbia. Here, answering questions about, well, herself, she was more at home.

It was in this second act of the night, where she was given space to tell stories about her own life and not her father’s, that she seemed most comfortable. In turn, the conversations were more interesting.

During these moments where she was the star, McCain touched on the topics driving her conservatism. She expressed her disgust over the recent Virginia bill allowing third-term abortions, calling it “infanticide.” She lamented how Baby Boomers “have screwed things up so royally” that young people of all parties might have no choice but to band together to a system the Boomers broke. She called out the media for being stuck in coastal urban enclaves, imploring them to “go meet actual voters and talk to real people in a non-judgmental way once in a while.”

Fittingly, this portion of the discussion yielded the best story of the day.

“I like talking to young people, because they seem to be more curious of my perspective than angry. I signify something. I ran into an (older) famous actor, and he started just venting away about guns. Sometimes people just want to vent at someone that represents what they’re angry at. I just try to feel compassion that they feel so unheard in whatever environment they’re in that I can be there for them.”

That actor, she reluctantly revealed, was “West Wing” star Bradley Whitford. Meacham and many in the crowd chuckled.

It was during anecdotes like that when she seemed most passionate about the discussion. It was Meghan McCain talking about her experiences, her preferences, her positions — you know, the things most guests are invited to talk about.

The Chancellor seems to be infatuated with the “Never Trump” wing of the Republican party, inviting Jeff Flake, Meghan McCain, and now President George W. Bush. So far, the guests have gotten a heavy dose of Trump-related questions and little space to talk about their own ideas and perspectives on politics. This is understandable, as Trump dominates the political world 24/7, but these conversations are opportunities to reach beyond Trump-sphere and give these guests a platform to interact with Vanderbilt students in a personal and powerful manner. If Zeppos wants to have a real conversation about Donald Trump, he should invite a Donald Trump supporter and hash it out. If not, he should stop trying to shoehorn Trump into every discussion and let his guests tell their own stories.