Dean Beasley: Presidential Rhetoric and Who is “Worthy” in the United States 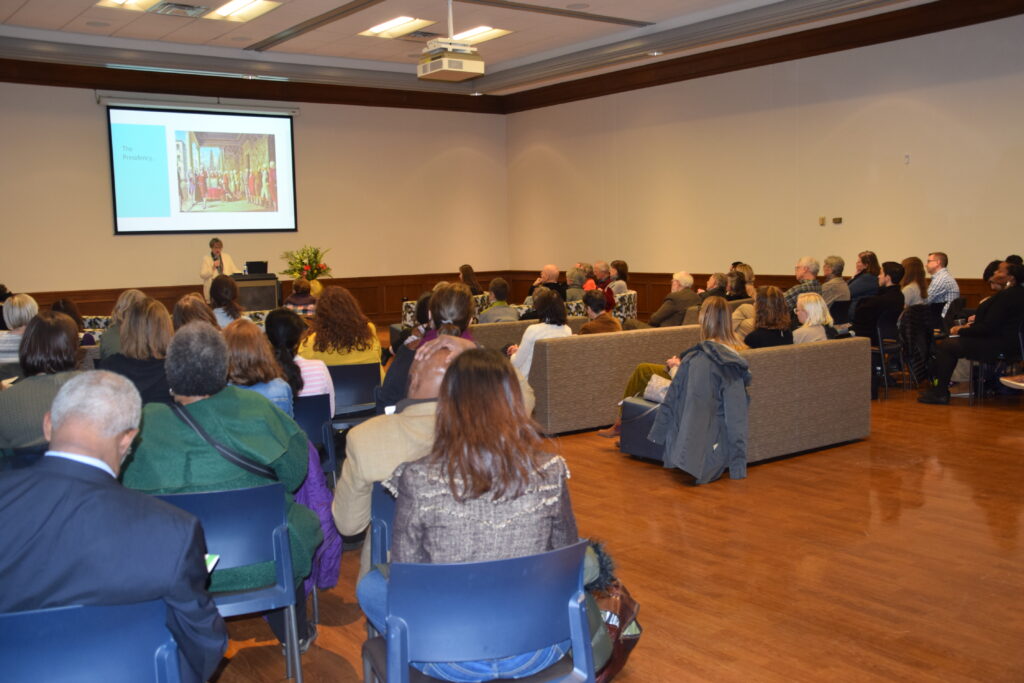 On Thursday, February 21 at the Vanderbilt Divinity School Dean Beasley delivered the 2019 Mafoi Carlisle Bogitsh Lecture. Her speech, titled “Enough: Imagining a Political Culture of Worthiness in the United States,” looked at how American presidents use their public discourse to reify, eliminate, or construct bonds within our national community. Dean Beasley is an expert on political rhetoric whose research is focused specifically on presidential rhetoric.

Beasley called on the audience to “consider what we can learn from our not-so-great past in order to build a better future.”

The lecture’s focus was on the notion of “worthiness” and how presidents create their own versions of worthiness and extend or revoke this label to certain groups.

Given President Trump’s infamous quote at his campaign announcement in 2015 in which he invoked images of rapists and drug dealers coming from the southern border, Dean Beasley’s lecture on presidential rhetoric of worthiness drew an eager and packed house.

Beasley framed the lecture around the symbolic power that presidential rhetoric holds. The mass media has been the essential mediator of knowledge about a sitting president to the public. The president needs the media to disseminate their messages just as much as the media relies on the president for content and revenue, Beasley explained to the crowd. However, what these two institutions have in common is their reliance on the American people for votes, attention, and money.

Dean Beasley established that presidents are subject to rhetorical norms, which refers to the constraints placed on their rhetoric by the institution that they inhabit. However, she was quick to note that in our current political moment and the seeming rhetorical freedom wielded by President Trump, this has never appeared less true.

One of the President’s chief symbolic duties is to shape and define national identity. This function of their rhetoric is most visibly on display during inaugural addresses, State Of The Union addresses, and times of crisis. In each of these instances their conceptions of who the American people are and definitions of American identity are on full display to the nation.

Dean Beasley used “freedom and equality” to illustrate the fluidity of “worthiness” in the United States. From the start of the nation in 1776, these words had white supremacy baked into them, according to Dean Beasley. Illustrating the inherent contradiction of these words, Beasley pointed to some of our most revered Presidents, like Thomas Jefferson and George Washington, who championed these values but also held slaves.

Words like “freedom and equality” can not be taken at face value when used by Presidents. Instead, Beasley encouraged the attendees to call out the language that presidents use to define national identity and to think critically about the multiple meanings of the terms by which Presidents characterize our national culture. Beasley said that historically it has been white men who have achieved “worthiness”

According to Dean Beasley’s research, Calvin Coolidge was the first president to employ some level of racially honest rhetoric and use a national address to criticize racial inequality in the United States. This is one important instance of a sitting president intentionally expanding our collective understanding of worthiness.

Beasley drew on President Lyndon Johnson’s “we shall overcome” speech, which suggested that we are all worthy of protection in the United States, as another important moment in the definition of worthiness in the United States. His speech condemned the violation of the civil rights of black Americans.

Beasley concluded by characterizing our current political moment as “not normal” due to the interaction between the media and the presidency. President Trump has worked tirelessly to delegitimize the channels by which the American public traditionally gets information about who we are as an American people and what we have in common.

Beasley put forward the question: “Can we regain what we’ve lost? Can we get back to the point where institutional norms constrain presidential rhetoric?” She emphasized that the safeguard of these norms is the American public. She invited each member of the audience to examine their own life and identify areas where they can speak worthiness into being. She implored careful consideration of the words they use and how they shape our notions of worthiness.