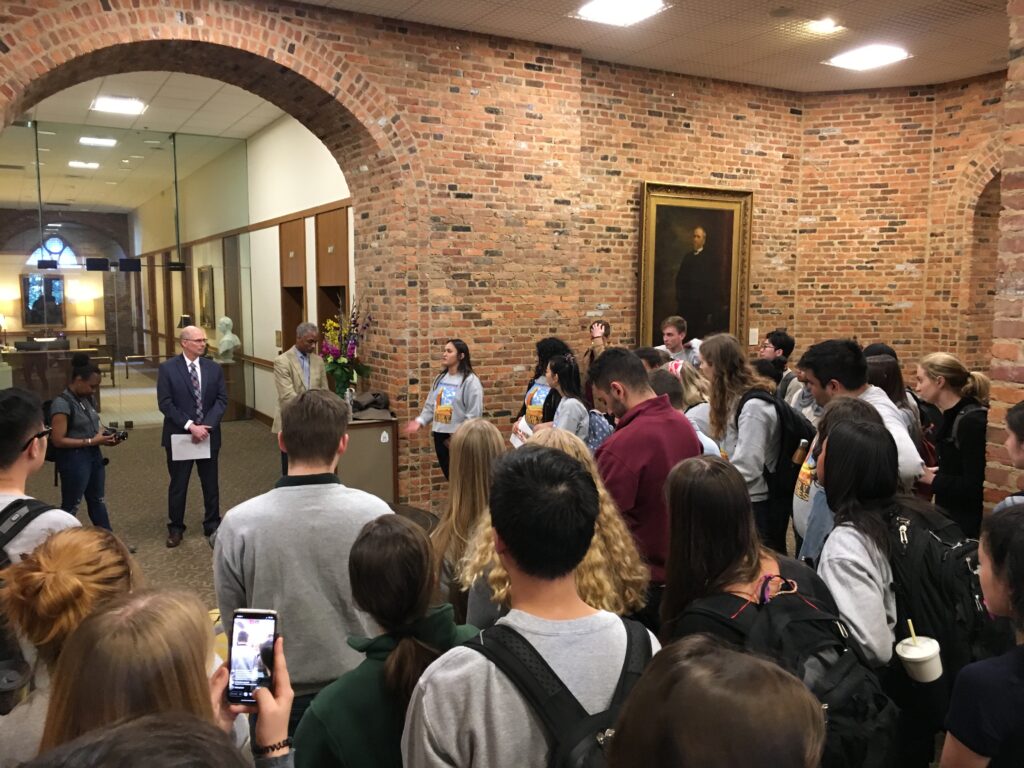 This morning at 11:00am the Vanderbilt Tour Guides launched a demonstration on Alumni Lawn in a call for compensation.

According to Telyse Masaoay, Vanderbilt senior and President of Tour Guides, the tour guides are demanding compensation for the work they put in and the value they provide to the school. The tour guides are requesting a wage of $10/hr. The demonstrators protested on Alumni Lawn in front of the Admissions Building in full display of prospective students and their parents. After protesting they marched to Kirkland Hall to hand-deliver a letter to Chancellor Zeppos. According to their document, the tour guides will conduct their tours as usual until April 1, when they have a meeting planned with administrators.

According to their document, “if we do not come to an agreeable resolution during our April 1st meeting, the Executive Board will cease offering organizational and logistical support to the admissions office. Many tour guides have also decided to cease giving tours after the April 1st meeting if the administration does not agree to fairly compensate organizational members.”

During this strike the Executive Board will cease all logistical support, such as scheduling, that they provide to admissions. Masaoay noted however that any tour guide is free to continue giving tours, it will just be without the scheduling, training, and oversight of the Executive Board. It is unclear at this time how many tour guides participated in the demonstration today or plan to strike after April 1 if no resolution is reached.

The demonstrators’ full list of demands that they have delivered to Chancellor Zeppos can be found here.

For Masaoay, the ultimate goal of today’s demonstration was to allow for the tour guides’ voices to be heard. In addition to the protest, they have planned a social media campaign with the hashtag, “#whatsourworth.”

Although tour guides are not officially paid, there are opportunities for compensation if a tour guide surpasses the 10-15 tour minimum in a semester. In the fall of 2018, of the roughly 80 active tour guides, eighteen received some form of compensation. Of those eighteen, ten of them were executive board members, which may be attributable to the fact that they often fill in when other guides cannot make it and are more involved than an average tour guide. Of those who were compensated, one guide received $300, three earned $200, four earned $100, and the other ten earned $50.

Masaoay agreed to speak on the record with VPR about the events leading up to today’s demonstration. She described what the 11-person Tour Guide Executive Board has come to call “tour guide burnout.” This term is characterized by tour guides leaving the organization come junior or senior year, students having to quit due to other job commitments, and general disenchantment with the University. While brainstorming ways to address the issue, the Board decided that compensation could ameliorate “burnout.”

Once the Executive Board recognized this phenomenon, they planned a town hall style event with their four advisors, all of whom are Vanderbilt Admissions Counselors, to address burnout. One issue that was set to be discussed at the event was tour guide compensation. However, as higher-ups became looped in on the event and its topic, Masaoay says she received a phone call from Jan Deike, Assistant Director of Admissions.

In the phone call, Masaoay was informed that John Gaines, Director of Undergraduate Admissions, and Doug Christiansen, Vice Provost for University Enrollment Affairs and Dean of Admissions and Financial Aid, believed that this would be an inappropriate forum to discuss compensation and wanted the event cancelled.

Frustrated by this response, Masaoay says the Executive Board decided to do research on their own. According to Masaoay, they reached out to all top 25 universities as ranked by the U.S. News and World Report. Of these top 25 universities, 16 of them pay tour guides, 7 do not, and 2 are unknown. However, VPR could not independently verify this information.

It was after this that the Executive Board decided to lead a demonstration.

The guides allege that they are underappreciated and undervalued by the administration. The protesting guides are also motivated by financial inclusivity. According to one tour guide, who wished to remain anonymous, keeping tour guides unpaid bars lower-income students from participating in tour guides. They are left to choose between an on-campus job that pays them a wage and an unpaid position as a guide.

Competition to become a tour guide at Vanderbilt is fierce. Those who are selected to represent the school on tours are seen as members of an elite group of students on campus. They act as one of the central liaisons between prospective students, their parents, and the school. Additionally, tour guides are given the challenging task of communicating the University’s values, goals, and character while also displaying their own unique Vanderbilt experience.

On top of leading tours, the guides play an important role on Vanderbilt’s website. On the admissions page, all tour guides can be found with their hometown, major, and contact information listed for any student or family to contact with questions about Vanderbilt.

Although the guides do not receive financial compensation, working as a tour guide on campus does provide them some value. Tour guides are plugged into a small network of students who are known to go on to work in elite and prestigious jobs after graduation.

However, despite the discontentment from the Executive Board, VPR spoke with others who disagreed with the Board’s decision to stage the demonstration.

One tour guide, who also spoke on the condition of anonymity, criticized the push for compensation. They explained that being selected as a tour guide is incredibly competitive because there is a genuine love for Vanderbilt across campus and a desire to represent the school. Unlike other elite schools that do pay tour guides, being a guide is seen as an honor and a privilege at Vanderbilt, which requires no financial incentive, according to the source.

The unnamed source also pushed back against the claim that the protest is in the name of financial inclusivity. Most tour guides do just a few tours a week and they asserted that with each tour lasting just 1.5 hours, maintaining a position with tour guides and a paid job on campus is tenable. They also contend that if tour guides were to be paid, there would be intense competition to complete more tours each week, and as a result the number of tour guides would have to be decreased.

This is not the first time in recent years that students have marched into Kirkland Hall seeking change on campus. In 2016, Hidden Dores, a group that advocates for minority issues on campus, staged a demonstration at Kirkland.