Tragedy and Hope Away from Home 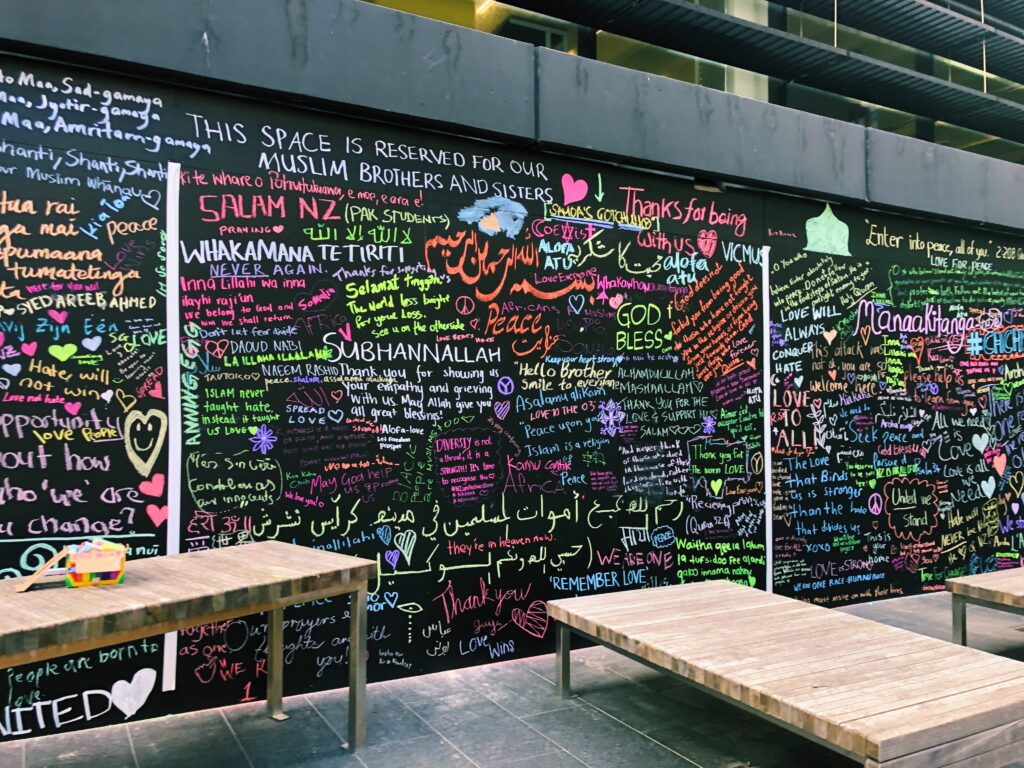 Four weeks ago, I stared out the window of my plane as it descended into the almost impossibly picturesque mountains of New Zealand, filled with excitement about my upcoming semester in Wellington. To me, New Zealand was an untouched holy land of sorts, rife with friendly people and spectacular nature, and most of all, void of much of the conflict that plagues the United States. If I ever saw New Zealand on the news, it was typically an article that described what this small nation was doing right. On my first day of orientation, a police officer spoke to all of the international students on New Zealand safety. He insisted that although New Zealand is one of the safer countries in the world, we should still remain vigilant and “not be stupid.” However, he comforted us with the fact that a little less than a dozen people die each year from gun homicide, which was a jarring statistic to the Americans, who hear about gun homicides frequently at home.

As I began my classes, I was instantly surprised at the Kiwis’ fascination with the United States, and particularly our pop culture and our current political state. One of my professors spent a large portion of our first class discussing an image of Adam Levine performing at the Super Bowl as a representation of “popular media culture.” In a different class, my professor dedicated 30 minutes to showing us articles about the way the United States is addressing climate change, and why it is not effective enough. My peers were also intrigued by the United States, and asked me many questions about my home country when they realized where I am from. One Kiwi even asked me why we have so many shootings, and questioned our reasoning for not approaching our gun control debate differently. Their inquiries were never malicious or judgmental, but merely curious. However, I always felt slightly embarrassed, and even jealous of the way that their own country was perceived by the rest of the world compared to mine.

On the afternoon of March 15th, I was walking back home from downtown Wellington when I received a call from a friend, who asked me if I was in the same city as the New Zealand shooting that just occurred. Although confused at first, I quickly began receiving news updates, texts, safety alerts, and even warnings from the New Zealand Consulate about the mass shootings that had just occurred in several mosques in Christchurch. We were told that the national security risk was now raised to high, and that we should all inform our friends and family that we are okay.

I have had a map of New Zealand hanging in my room for years, as I have always wanted to see for myself the safe and perfect place that I have read so much about in nature books over the years. Many of my classmates who are international students came with the same vision, so when the shooting first happened, it felt as though our pure image of New Zealand was shattered. It seems as though everyone at least knows someone that was in some way affected by what happened. Classes have been much more solemn, as teachers have tried to adequately express their sorrow while also attempting to speak with a trace of optimism for how we can change things in the future. Our Kiwi friends are devastated and confused, and as we know all too well, there is no easy way to explain why or how this could happen.

This was the first mass shooting that New Zealand has faced in 29 years. Coming from a nation where mass shootings are far too common, I knew what would happen over the course of the next few days: vigils, thoughts and prayers, and promises of changes to gun laws. However, the difference has been that here it seems like they really mean it. Prime Minister Jacinda Ardern quickly announced that gun law reforms will be passed in 10 days in the wake of the shooting. Many citizens around the nation are even handing in their semi-automatic weapons in protest of their availability. It feels as though the country is not divided by such a tragedy, but actually united by their pain and desire to prevent such an event from ever happening again. Ultimately, my image of New Zealand has grown since I have arrived, as I am continuously impressed with the kindness and strength of everyone in this small and special country.