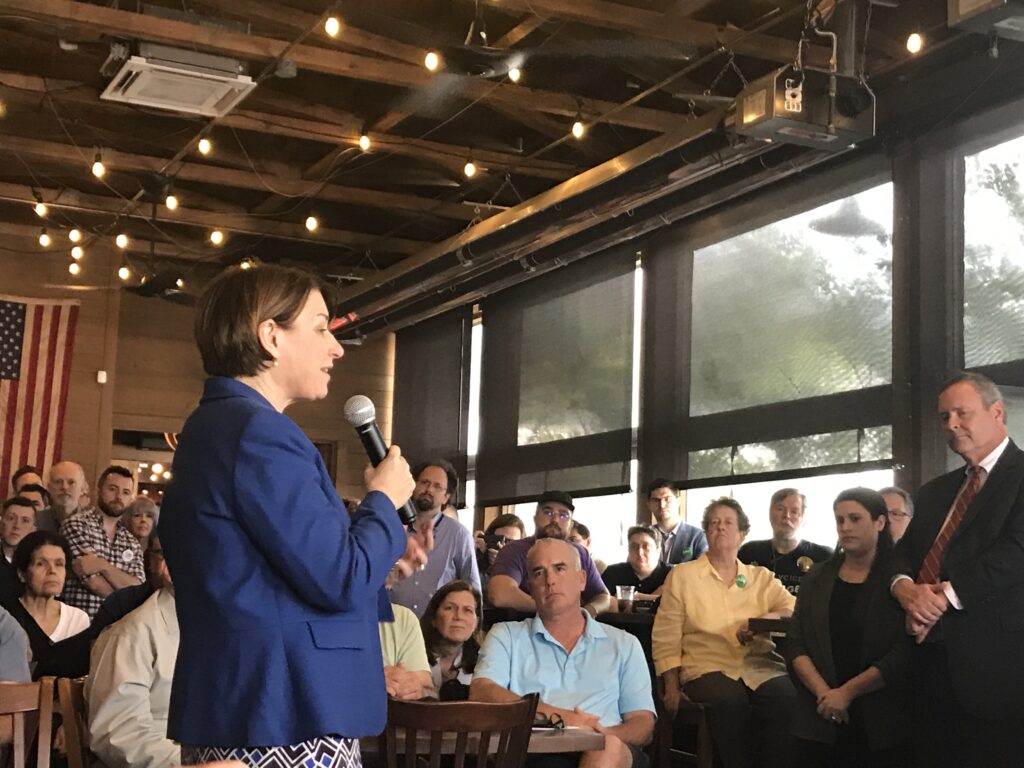 Klobuchar speaks to a crowd at Edley's on Wednesday, April 17th.

Amy Klobuchar, the first female Senator from Minnesota and candidate to be the first female President of the United States, made an appearance at Edley’s BBQ in East Nashville this Wednesday. Despite having been recently ranked by Vanderbilt’s Professor Alan Wiseman as the most effective Democratic Senator, Klobuchar’s national spotlight has been largely centered on her personal qualities: Klobuchar made headlines after having announced her campaign for her treatment of interns in her office, but has also been referred to as too “Minnesota nice” to stand up to politicians such as Trump.

A little over 100 people gathered at Edley’s to hear more about the Senator’s policies for our nation and for an opportunity to meet her. A quick look around the room made it obvious that the event space was packed with just the type of people that Klobuchar’s campaign seems to speak to, namely those who are white and middle aged. Minorities were not only noticeably absent from the room but also from Klobuchar’s dialogue. When asked about prison reform (specifically with regards to low level drug usage such as marijuana), Klobuchar offered the idea of drug courts and other ways to ease punishments on low-level drug offenders, but did not address the issue of systematic racism in our prison system. Since drug policies disproportionally affect people of color, it seems odd that Klobuchar would ignore race in the discussion of these policies.

Now, one could argue that candidates do not necessarily have time to speak to every issue in America during each campaign event. And that is true; however, Klobuchar nonetheless took the time to speak to less critical issues such as increasing internet speeds in rural communities. While discussing policies that mainly affect white and rural voters may have worked for her in Minnesota, it seems as though Klobuchar’s platforms may not yet have been tailored to a more diverse nationwide audience. A notable example was the countless references she made to people of differing abilities in her anecdotes — one to a student of her mother’s with autism, another to a child with down syndrome — yet she made no comment on the state of affairs for people with disabilities in the United States or how she hoped to improve their standard of living, instead she simply name-dropped her associations with these communities, seemingly as a way to bypass talking about the larger inequalities they face.

Don’t get me wrong: she certainly did connect with a decent portion of the audience. Some people were brought to tears by her sense of morality conveyed through quotes like “if you’re doing things for the right reason, you can win.” She also did have some tangible plans, for example raising taxes on the rich in order to ameliorate crumbling infrastructure or making pharmaceutical deals with Canada in order to lower drug prices. However, despite having discussed visiting states that were not her own — notably Iowa, New Hampshire, and Florida — ahead of next year’s primaries, Klobuchar put little emphasis of reaching out to communities that were not her own. The overall tone of the event conveyed a sense that Klobuchar’s campaign has some intersectionality issues that need to be addressed if she has any chance of winning the Democratic party’s nomination.