“J’Accuse..!” – The Endless Recurrence of History 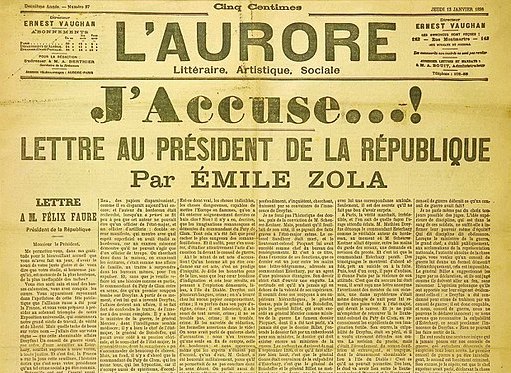 An Alumnus’ Response to “OP-ED: What Do We Gain from Allowing Chinese Espionage”

It was a sunny winter morning in the year of 1898, when the bourgeois class of French Third Republic woke up to a fresh edition of L’Aurore on their countertops. Little would the good citizens of the republic know that it was the most famous issue of the literary newspaper they would ever encounter – the prominent writer and social observer of the time, Émile Zola, had just ran a full-page open cover titled “J’Accuse…!,” which would later go down in history as synonymous with outrage and accusation against the powerful and the unjust. As an alumnus of this great institution I once called home, I found history repeating itself again when I came across the op-ed, “What do We Gain from Allowing Chinese Espionage?,” which was recently taken down.

Back in 1894, Alfred Dreyfus, a Jewish French artillery captain, was accused of treason on the basis of suspicion that he had been providing secret military information to Germany, the archenemy of the French following the Franco-Prussian War. It was a great amusement, as the op-ed opened with the claim that, “(Chinese international) students are known to be an arm of Chinese espionage.” My initial reaction at the moment was almost clouded by the fantasy of myself cruising in Rand with a hairdo, trying to steal the recipe of the famous cookie; or a midnight Stevenson sunglass selfie captioned by “I’m not the spy, you’re a spy,” a line inspired by one of the sassier Instagram posts made by Kendall Jenner – I wonder if a century ago, Monsieur Dreyfus felt the same. As distant as either my fantasy or the accusation against Dreyfus is, I found this claim to be nothing but lacking in evidence. Or would the author be so scholarly as to footnote the source – the sitting president and his “wise” choice of words, I presume? And how would the author convince his audience of the credibility of such a source, I wonder?

With regard to his second claim that China is a “country known for espionage” – I regretfully have to concede that I own no evidence of either there is truth or falsehood to such claim. For the time being, however, I must draw the reader’s attention to a fine line between the reputation of a state and the will of its citizens – if China is, indeed, a country famed for its espionage skills, should the same be held for its citizens that everyone is prone to such espionage? If I am a receptionist at a fine restaurant in Europe with dress code, must I keep a constant eye on these “American tourists” and make sure they won’t show up in basketball trunks and start dictating everyone, just because I have the perception of the U.S. being a regime with self-proclaimed exceptionalism in global affairs? Vice versa, the citizens’ actions should not be construed as evidence to generalize a state – if a group of seventh century Chinese merchants were to visit Byzantine Empire for trades, and accidentally found out that there already was Byzantine-made silk and textile on sale in the bazaar of Constantinople (two monks in the mid-sixth century famously smuggled the crucial silkworms from China), would they find any reason to stand up to the Eastern Roman emperor, and accuse him of espionage activities made by his subjects, with no evidence that his regime should be held responsible? There have been way too many defenses against the notion of generalization, so please allow me to use analogies to render my argument less boring.

Finally, I must also address the author’s only “flattering” claim that Chinese students bring too much tuition money for my alma mater to naysay. In my graduation class (Class of 2017), I was only aware of around 20+ Chinese internationals who made the voyage from China to Vanderbilt, and it is my understanding that as Vandy adopts a new admission strategy, more and more Chinese students have had the chances of being admitted this great school, due to their academic caliber and increased familiarity with U.S. college admission at home. If the author were to accuse the admission office for the existing admission practices which unfairly leans toward us, surely he could invoke more meritocracy-based evidence to support his claim; but until such evidence is found, let’s leave the matter to the admission office’s realm and trust them with fair judgments.

On a personal note, by no means did I consider myself to be the privileged class with means to plunder my parent’s wealth, as they had been saving up for the entirety of my tuition with not many scholarships/student loans/financial stipends available. Plus, it also has to be acknowledged that China has only transformed into a capitalist society in the last 40 years, and its average GDP per capita is less than 1/6 of that of the United States. So please imagine if your middle-class parents drained their 401k plan to cover your tuition expense because you have (i) no matching criteria to qualify for scholarships and (ii) no student loan options available. Upon graduation, I have had the chance to work at a Wall Street financial institution considered to be a decent outcome from campus recruiting. Looking back, I was grateful for Vandy, not only because I considered my time here worthwhile, surrounded by world-class educational resources and supportive mentors, but also because of the harsh reality the school has taught me – the very essence of Vandy social culture has always been engulfed with kinships of various forms. And as an international student, it was childish for me to ever think that my American peers would naturally treat me with friendship and without suspicion. In that sense, I am grateful for the author for openly displaying and confirming the very suspicion of hostility that international students have to face on a daily basis. Herein I implore my fellow international (Chinese and non-Chinese) readers – while taking advantage of making friends at a great school like Vandy, do never place your trust at fabricated friendship, and please walk away from nonsense as early as you see it.

Following a series of unjust trials with evidence based on thin air, Monsieur Dreyfus was eventually humiliated and sentenced into exile. So fierce was Zola’s open letter defending Dreyfus and accusing the general anti-Semitism of the Republic, that the letter caused an eruption of outrage and stir across France. Zola later found himself locked up behind prison cells because of his words. Although both would be eventually freed, it was not until the end of WWII did the world unilaterally decry the notion of anti-Semitism. As a man of progress, I believe the elements of Spanish Inquisitions and Kristallnachts should stay the way they are – in history books – and discriminations solely based on generalizations should never be allowed entry into this great campus I proudly call my alma mater.

Author’s Note: Before the author published this article, Vanderbilt Political Review’s Board presented to the author the citations of sources within the original op-ed (which has now been taken offline). The author fully acknowledges the sources provided by the authors of the original op-ed. This article only represents the author’s own personal views and understanding of the matter, and is not affiliated with any organization.