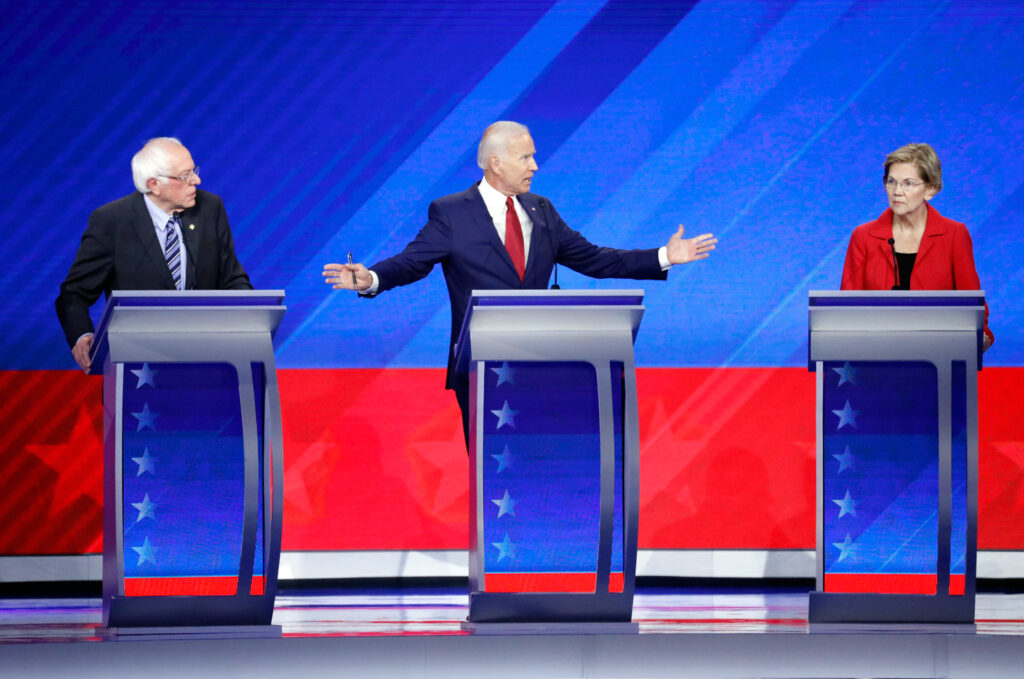 The third Democratic debate offered us a glimpse into how the 2020 primary race will unfold. The field has already been cut in half because of the DNC’s strict qualification requirements and it will narrow even more dramatically in the coming months as we approach the first official contests in Iowa and New Hampshire. Taking center stage on Thursday was the progressive/moderate conflict that we have become accustomed to in this cycle. With Bernie and Warren on either side of the frontrunner, Joe Biden, the night gave us a display of nuanced argumentation on a host of issues.

Healthcare: “He did answer that”

As with the second debate, this one started with a lengthy exchange on healthcare. The moderators pressed Warren to acknowledge that Medicare for All would increase taxes on the middle class, which she did in a roundabout way by reminding listeners that their premiums would disappear in tandem with the tax increases. Klobuchar, Buttigieg, and Biden tried to walk the moderate lane by offering the public Medicare option that Barack Obama tried to pass along with the Affordable Care Act in 2010. Kamala and Beto reminded voters that they have their own plans that try and achieve universal health coverage in different ways. Except for Bernie and Warren, each candidate has stressed the importance of giving consumers the choice between public and private insurance. It is important to note, however, that Medicare for All is the only plan that is free at the point of use for everyone.

Racism/Criminal Justice: “There are 17,000 people unjustly incarcerated in America”

There was less disagreement during the exchanges on racism and criminal justice, while instead giving each candidate an opportunity to showcase their individual ideas and perspectives. Beto kicked things off with a fiery endorsement of reparations. Cory Booker reminded us that racism manifests itself in environmental ways and proposed opening an Office for Hate Crimes. Kamala was asked a loaded question about her history as a prosecutor, which she handled much better than the takedown Tulsi Gabbard launched on her in the second debate. She explained that she always understood the issues with the criminal justice system, but decided to be a prosecutor anyway because she knew she could make tangible changes from the inside. Later, Klobuchar was similarly pressed on her history as a prosecutor and her seemingly apathetic remarks about race. She dodged direct accusations and offered up her proposals for criminal justice reform. To contrast himself, Joe Biden reminded everyone that he started his career as a defendant, not a prosecutor. He stressed that the point of jail should be rehabilitation rather than punishment. Finally, Booker finished the segment by imploring the DOJ to look into the over 17,000 cases of imprisoned individuals that are demonstrably innocent and ought to be released immediately.

The exchange on guns was, again, less about disagreement and more about firing Democrats up with positions that are increasingly accepted by a majority of Americans. Beto did not mince words when confirming that he would institute mandatory gun buybacks for people with AR-15’s, AK-47’s, and other weapons of war. Biden reminded everyone that we cannot use executive action to ban assault weapons. To that Kamala quipped, “instead of saying we can’t, let’s say ‘yes we can’,” – a more or less nonsensical answer in this context. Klobuchar was caught a step to the right of her colleagues again here. She voiced her support for background checks and magazine limitations, but did not offer any lip service to an assault weapons ban or even licensing. Warren reminded everyone that getting rid of the filibuster is key to getting any of these reforms passed. Bernie surprisingly disagreed with the so-called “nuclear option” yet again, offering budget reconciliation as a tool to get things done without sixty votes.

Immigration: “I was the Vice President”

Immigration was an issue that lent itself to more clash and discussion. Biden was asked directly about the deportation spree that he and Obama went on during their eight years in office. He yet again tried to distance himself from Obama when it was expedient to do so, pointing out that he was merely second in command. Julián Castro, another Obama alumnus, stepped in and pushed Biden to answer for Obama’s faults if he is planning to take credit for Obama’s merits. Castro went on to promise immigration reform within his first 100 days. Andrew Yang took the conversation in a different direction, talking about meritocratic immigration and how America was built on those ideals. Beto pointed out that we should move towards treating our border with Mexico with the same respect that we treat the one with Canada and did not shy away from criticizing Obama for his deportations.

Foreign Policy: “Dropping bombs on Afghanistan and Iraq was not the way to do it”

Warren came out with a proposal to pull troops out of Afghanistan immediately, even if it meant going against the advice of generals on the ground. Biden said that he regrets the AUMF he voted for in Afghanistan, and explained that he was against the surge of troops there. Bernie reminded everyone that he is the ideal pacifist. He led the opposition against the war in Iraq, in stark contrast to Biden’s leadership of the war effort itself. Bernie is also the only candidate to have voted against every one of Trump’s military budget increases, remarking that we don’t need to spend $750 billion per year if we don’t even know who the enemy is.

Environment: “I refuse to postpone any longer taking on action against climate change”

The exchange on the environment was disappointingly terse, especially given the recent push to dedicate an entire debate to the issue. Warren urged the use of regulatory tools on our domestic companies as well as using our trade policy to get other countries to match our aggressive standards. Overall, she promised to cut emissions by 70% by 2035. Bernie was surprisingly not even asked about his Green New Deal, which was recently released with much criticism and acclaim from different sides.

Education: “We’ll move to see that every teacher in America makes at least $60,000 per year”

Andrew Yang opened the discussion with another weirdly right-wing position. He argued that only 30% of childhood outcomes come from schooling. He suggested that money would be better spent in other places that have a bigger impact on kids, such as his UBI proposal. Pete respectfully disagreed and everyone else pretended as if Yang hadn’t said anything. Warren promised that her Secretary of Education would be a former teacher. Everyone coalesced around dramatically increasing teacher’s pay, with Bernie specifying that no teacher should earn less than $60,000 per year. He also reminded everyone of his proposal from 2016 to make public colleges and HBCUs tuition free, as well as his new bill that would eliminate every penny of outstanding student debt in the country.

The debate concluded with each candidate telling a story of a setback they had faced in their professional life. Overall, the whittled field allowed for deeper discussion on the issues, though it was unclear who came out on top in the debate. Polls over the next week will show us whether voters were swayed by any particular performance. If no jumps are made after this debate, the real winner will be Joe Biden, as he already owns a 10 point lead in the RealClearPolitics national polling average and just needs to maintain it.