Your Regular Shot of Common Sense: Get Vaccinated 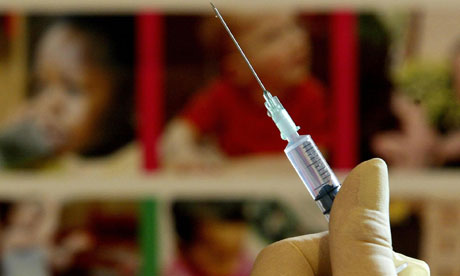 “She told me that her little daughter took that vaccine, that injection, and she suffered from mental retardation thereafter. There is no second chance for these little girls if there is any dangerous consequences to their bodies.”

Rep. Michelle  Bachman uttered these words in a Republican Primary Debate as she criticized an executive order made by Rick Perry which mandated that young girls receive the HPV vaccination Gardasil.  Of course, she’s wrong: doctors’ groups roundly condemned her comment, pointing out that studies have found no evidence that the vaccine causes mental illness (1). Nonetheless, she echoed an ancient and seemingly intractable fear of vaccines that is responsible for tens of thousands of preventable infections in the United States and around the world.

Unfortunately, this isn’t an isolated case.  In 2008, Ron Paul called vaccines “very, very harmful” (2). That same year, John McCain erroneously stated that mercury in vaccines caused autism (3). Democrats also spread this nonsense. Barrack Obama and Hillary Clinton suggested in 2008 that there wasn’t enough evidence to say for sure that vaccines don’t cause autism (4). They’re all wrong, too. We do know: A review of 1000 studies by the Institute of Medicine concluded that vaccines are almost always safe and there is no evidence linking any vaccines to autism (5).

David Ropeik, a risk consultant and Harvard academic, says that there are many reasons why people distrust doctors when it comes to vaccines.(6)  And Bachman’s words pretty much touch on all of them. Vaccines are unnatural, invasive, and primarily affect children. Vaccines are also a victim of their own success: as media coverage of infectious diseases like Measles died down after widespread vaccination against them, fear of these diseases diminished (7). These factors explain why about one in five Americans believe that vaccines cause autism (and many more are unsure) even though the only study purporting this was an exposed fraud (8).

The CDC has designated widespread vaccination as one of the ten greatest public health achievements. This is for good reason; a 2011 economic analysis found that “vaccination of each U.S. birth cohort with the current childhood immunization schedule prevents approximately 42,000 deaths and 20 million cases of disease, with net savings of nearly $14 billion in direct costs and $69 billion in total societal costs” (9). Smallpox, which killed as many as 500 million people in the 20th Century alone, was exterminated because of widespread vaccination (10). By 2000, vaccination eliminated the spread of measles in the United States, which previously killed about 5,000 Americans each year (11).

Hence, it is irresponsible and morally reprehensible for politicians to suggest, contrary to all peer-reviewed medical knowledge, that vaccines are injurious to human health. These comments serve only to prolong falsehoods that result in unnecessary misery and even death.  Polls suggest that the public is becoming increasingly skeptical of vaccines (12), and, consequently, diseases like measles and pertussis that previously had been contained are now on the rise (13). Between 40,000 and 50,000 Americans die each year from diseases that could have been prevented through proper vaccination (14). This staggering toll, which equates to some fifteen 9/11’s each year, is the price we pay for our irrational fear of vaccines.

Vandy students, faculty, and staff—be sure to check out Flulapalooza 2, Vanderbilt’s second annual mass-inoculation of the flu virus, which is happening on October 17-18.