Actor and Activist George Takei Reflects on His Remarkable Life 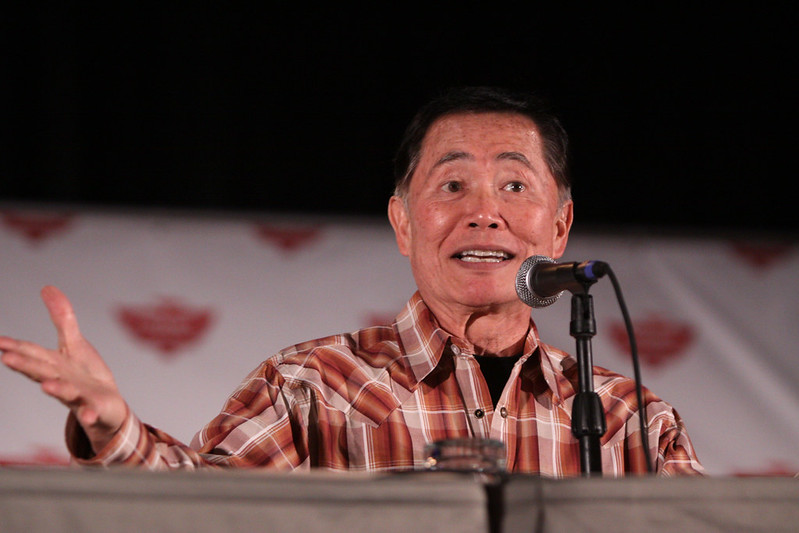 Speaking to a crowd of students, faculty, and quite a few Star Trek enthusiasts on Wednesday evening, actor and activist George Takei reflected on his life, from his time in a Japanese American internment camp to his prolific work fighting for LGBTQ rights.

Takei’s lecture was part of this fall’s Chancellor’s Lecture Series, with the theme “Culture of Respect; Culture of Caring.” In introducing Takei, best known for his role as Star Trek’s Sulu, Interim Chancellor Susan R. Wente stressed that a central goal of the lecture series is to spark dialogue on campus about significant topics and establish cross-community connections in the process. Chancellor Wente also pointed out that the lecture was a part of the university’s celebration of Asian Pacific American Heritage Month.

Rejecting the traditional podium, Takei instead chose to deliver his lecture from centerstage. He began his talk by remarking that the United States categorized him as an enemy alien when he was only five years old. Takei explained that after the bombing of Pearl Harbor in 1941, an anti-Japanese American hysteria spread throughout the country. The panic culminated in President Roosevelt’s decision to order roughly 125,000 Japanese Americans on the West Coast to be relocated to internment camps scattered throughout the country. Takei was sent to internment camps in Arkansas and California where he and his family lived for years. His time spent in these camps is the subject of his New York Times bestselling graphic memoir, They Called Us Enemy.

With a smile on his face, Takei explained his own, mostly happy, experience in the camp, which he saw as one big adventure. For his parents, however, their internment was degrading, insulting, and humiliating. It was not until a few years after his internment ended that Takei began to share in his parents’ outrage. During his teenage years, Takei reflected on his internment, coming to realize that his treatment at the hands of his own government was unreconcilable with the values of freedom and equality on which the United States was ostensibly founded.

Most would understand why Takei had grown pessimistic about his country given the way he and his family had been treated. However, his experience with internment also inspired Takei to work to create a democracy that was truly built on the values of freedom and equality espoused in the constitution. From this experience, a life of social justice activism was born.

From marching in the civil rights movement and opposing the Vietnam War, to lobbying for the United States government to officially apologize for the internment of Japanese Americans, Takei dedicated the time he didn’t spend acting to social justice. However, he was silent on one issue — that of LGBTQ rights. Having known he was gay since he was an adolescent, Takei was afraid of other people knowing he was different, since being different is what had put him and his family in an internment camp. However, as political debate brought marriage equality to the forefront in the early 2000s, Takei decided he could no longer stay silent. He proudly came out as gay and continued to fight for marriage equality until the 2015 Supreme Court decision that legalized gay marriage throughout the country.

Takei closed his talk with a message for his audience about the possibility of effecting change to create a more equitable, just society. He celebrated the “bigness of America” and called upon the audience to be the change that they desired in their country. Spoken by anyone else, Takei’s message may have seemed hopelessly idealistic. However, coming from someone who had seen the worst of his country and worked to improve it, Takei’s message was a reassuring reminder that change is within reach.