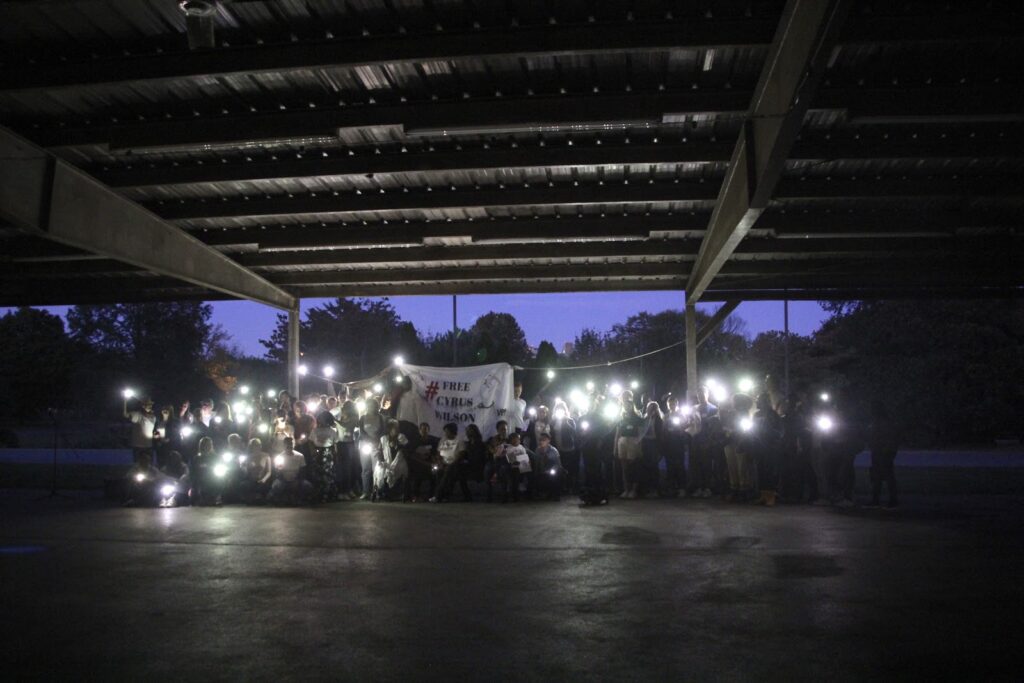 After spending 27 years behind bars for a crime he maintains he did not commit, Edgehill native Cyrus Wilson came one step closer to being released on Wednesday. Tennessee Board of Parole member Gary M. Faulcon conducted Wilson’s parole hearing and recommended release. The remaining six members of the board will now vote, with four affirmative votes required for release. Wilson expects a final decision in two to three weeks.

“He has a great support system to come home to,” Wilson’s wife Casey said. “His family’s wonderful. We have a great group of friends, we have lots of community support, we have a great church community. So he’s coming home to a really good things.”

Wilson has been accepted to the Nashville Center for Applied Technology and is interested in studying automotive service. American Baptist College also offered a full scholarship to Wilson. Dr. Forrest Harris, Sr., president of the college and a professor in the Vanderbilt Divinity School, spoke on Wilson’s behalf during his hearing and cited his eagerness to pursue an education as a reason supporting his release.

“Today’s decision was what we have all been fighting for over the last eight months,” Jennifer Pigge, president of Vanderbilt Prison Project (VPP) said on Wednesday. VPP actively campaigned for Wilson’s release since February. “We know the fight is not over, but for today, there is a piece of victory.”

In 1994, after a trial that lasted two days, a jury convicted Wilson of first-degree murder and sentenced him to life in prison for the 1992 killing of Edgehill teen Christopher Luckett. Prosecutors relied primarily on circumstantial evidence and two juvenile witnesses who testified to seeing the shooting. The witnesses recanted their testimony in 2013, saying they felt pressured to implicate Wilson after investigators threatened criminal charges.

Additional developments in Wilson’s case sparked scrutiny of his conviction. In 2010, Wilson appealed his case after the discovery of a note by his prosecutor which said, “good case but for most of [the witnesses] are juveniles who have already lied repeatedly.” The Tennessee Supreme Court denied his appeal after deeming the note insufficient to trigger a new trial. The lack of physical evidence tying Wilson to the scene of the murder also provoked calls for reconsideration. In 2013, a Tennessee Bureau of Investigation report found that the shells discovered at the scene did not match the gun that prosecutors believed to be the murder weapon. Wilson continues to fight his conviction to this day.

25 years after his sentencing, Wilson became eligible for parole in April. The board voted to continue his case and requested that he complete a risk assessment and psychological evaluation before considering his case again in six months. Prior to the hearing, VPP conducted a letter-writing campaign to the parole board asking that Wilson be released. Many members also attempted to attend the hearing itself but were turned away, instead rallying at the Capitol.

“[Wilson] is a vibrant, unique, kind, intelligent, empathetic, hardworking part of our Nashville community. I believe that Nashville will be kinder, safer, stronger, and all around better with Cyrus free,” Pigge said. “It is partially for these reasons that VPP has a responsibility to join in Cyrus’ freedom fight. While Cyrus as an individual is unique, his case is not. It exemplifies many of the problems with our criminal legal system that are harming tons of individuals and communities every day.”

VPP continued their advocacy for Wilson after his first parole hearing. During its annual Awareness Week earlier this month, the organization collected over 450 student signatures backing a Vanderbilt Student Government resolution supporting Wilson’s release. VPP also held an event in Centennial Park on Monday in a display of support for Wilson, whose family members spoke to over 75 Vanderbilt students and Nashville community members in attendance.

“When you have a child that goes to prison, people don’t realize that you are in prison, you are incarcerated as well,” Wilson’s mother Valerie Ehinlaiye said. “I didn’t get the chance to raise my son like I wanted to. They took him from me. The prison system raised my baby.”

Wilson’s daughter Cassidy echoed her mother’s comments. “The biggest emotional challenge that I had is him not being able to see the everyday things that me and my sister did. He missed my sister’s graduation and that affected her a lot,” she said. “When Cyrus comes home, the world might not become a better place, but it will be on its way to getting there.