A Closer Look at the Nobel Peace Prize 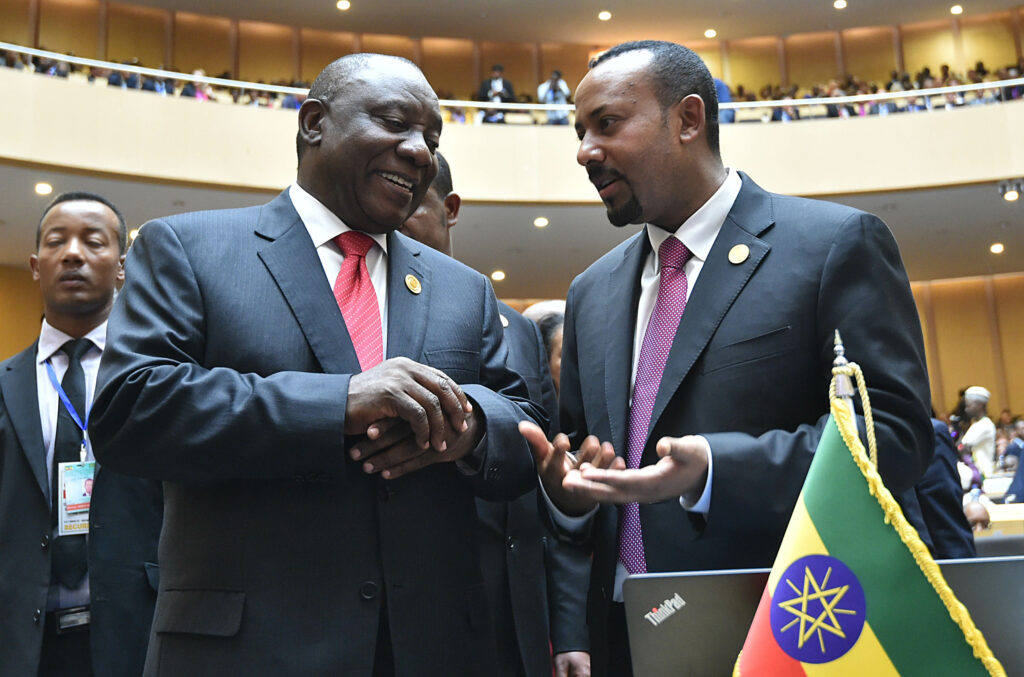 President Cyril Ramaphosa with Prime Minister of Ethiopia Abiy Ahmed during the opening session of the 32nd Ordinary Session of the Assembly of Heads of State and Government of the African Union. The Assembly takes place from 10-11 February 2019 under the theme: “The Year of Refugees, Returnees and International Displaced Persons: Towards Durable Solutions to Forced Displacement in Africa”. It presents an invaluable opportunity to reflect on and address the root causes of forced displacement in Africa. 10/02/2019 Kopano Tlape GCIS

Since its establishment in 1901, the Nobel Prize has been awarded on a yearly basis to those who, in Alfred Nobel’s own words, “shall have conferred the greatest benefit on mankind.” Due to its global scope, the presentation of the Nobel Prize has become one of the most widely followed and publicized international accolades of the last century, and each ceremony inevitably sparks fiery debates as to the merit of the awardees.

In particular, due to its convoluted and clandestine nomination process, the Nobel Peace Prize has perhaps garnered the most attention, with many contending that it represents an elitist, narrow-minded political presentation rather than a genuine celebration of peacemaking. From Mahatma Gandhi’s infamous five-time snub to President Barack Obamas’s questionable win in 2009, the Peace Prize is no stranger to controversy, with many commenters observing that with no true standards or concrete guiding principles, the Prize functionally means close to nothing.  Vanderbilt’s own Muhammad Yunus is no stranger to the heat that inevitably comes as a result of the prize, with the 2006 Laureate still receiving significant backlash.

This year, 301 individuals and organizations were nominated for the Nobel Peace Prize,  with the actual names of the nominees closely guarded, as tradition, by the Nobel Institute. The nomination process is one that is shrouded in mystery, beginning in September of every year with nominators having to fulfill a strict set of criteria laid out by the Institute. After the February deadline, the Committee assesses the relative merits and strengths of the contenders, after which a shortlist compiling the “most interesting and worthy candidates” is written up.

During the summer, the Norwegian Nobel Committee debates the choices on the shortlist with the ultimate goal being a unanimous decision. The very composition of this Nobel Committee has long been the subject of great criticism, since every member has always been a  Norwegian national despite it not being required. This year was no different, with the 2019 Norwegian Nobel Committee comprising of Berit Reiss-Andersen, Henrik Syse, Anne Enger, Asle Toje, Thorbjorn Jagland, and Olav Njolstad, all of whom are currently serving six-year terms.

Although there is no way to confirm the shortlist one way or another, it was speculated this year that among those in the running were Swedish climate activist Greta Thunberg, New Zealand Prime Minister Jacinda Ardern, Brazilian indigenous chief Raoni Metuktire, and Reporters without Borders. The possibility that Thurnberg could actually clinch the prize was of particular contention, with opponents arguing that she lacks political experience and proponents highlighting how youth activism will be key to solving the climate crisis. Following the announcement of Ahmed’s win, her name has been featured even more prominently in the news. Reports have run the gamut, from claiming that it would be an insult to Thunberg herself as a means of silencing her to fierce condemnations of the Norwegian Peace Committee as protecting the interests of a largely petroleum-based economy.

Regardless of one’s stance on Thunberg, it is worth investigating the relative merits of this year’s declared winner, Ethiopian Prime Minister Abiy Ahmed. Last year marked the end of the nearly two-decade long border dispute between the neighboring nations Eritrea and Ethiopia, having resulted in upward of 100,000 deaths as well as countless human rights abuses. The violent border conflict has its origins in dispute over the tiny border village of Badme in 1998. Unlike other disputes of this nature, the conflict between Eritrea and Ethiopia was not fought over valuable resources or key geopolitical territorial claims: it was fought over national and ethnic pride between two of Africa’s most politically disparate nations. One is a violently oppressive autocracy widely termed the “North Korea of Africa,” and the other is a fledgling quasi-democracy rife with internal turmoil. The conflict resulted in massive loss of life as well as deteriorating economic and political conditions for citizens on both sides, compounded by violent spillover into neighboring countries and a burgeoning arms trade.

After former Prime Minister Hailemariam Desalegn’s unexpected resignation in February of last year, then forty-two-year-old Abiy Ahmed was nominated by his party to take the helm of the second most populous country in Africa. As the nation’s first Oromo Prime Minister, an ethnic group which had largely been suppressed and surveilled by the state, Ahmed’s ascendency to the nation’s highest office was widely considered a sign of change for the country, and within days of being sworn in, he made clear his intention to broker peace with neighboring Eritrea.

Ahmed’s first months in office marked a clear departure from Ethiopian politics and was an encouraging signal for civic freedoms within the country, as he released thousands of political prisoners and fired the country’s head of prison systems due to widespread allegations of torture. Under Ahmed, half of his cabinet positions were filled with women, and Parliament appointed the country’s first female president. Perhaps most importantly, Ahmed is widely credited with ending the border dispute with Eritrea, accepting a settlement proposed by Eritrea just four months after taking office. Despite the unprecedented success of the peace settlement, much remains to be decided, with Eritrean president Isasais Afwerki continuing to perpetuate largely unchecked human rights abuses against the civilian population.

While it is clear that Ahmed has made several laudable steps toward both domestic and international peace within the region, many observers worry that the award reifies a peace deal that has in recent months come to a standstill. Rather than encourage renewed efforts on both sides, many contend that people may be celebrating too soon, as the border is still widely considered a dangerous zone for citizens on both sides.

Worse still, it is also possible that the one-sided winner of the prize will alienate Eritrea, although few could argue that awarding the prize to the current Eritrean president would be a cruel irony given his horrifying record of abuses against his people. Although Ahmed has made several important strides toward peace in the region, there is a long road ahead toward a meaningful, lasting change.