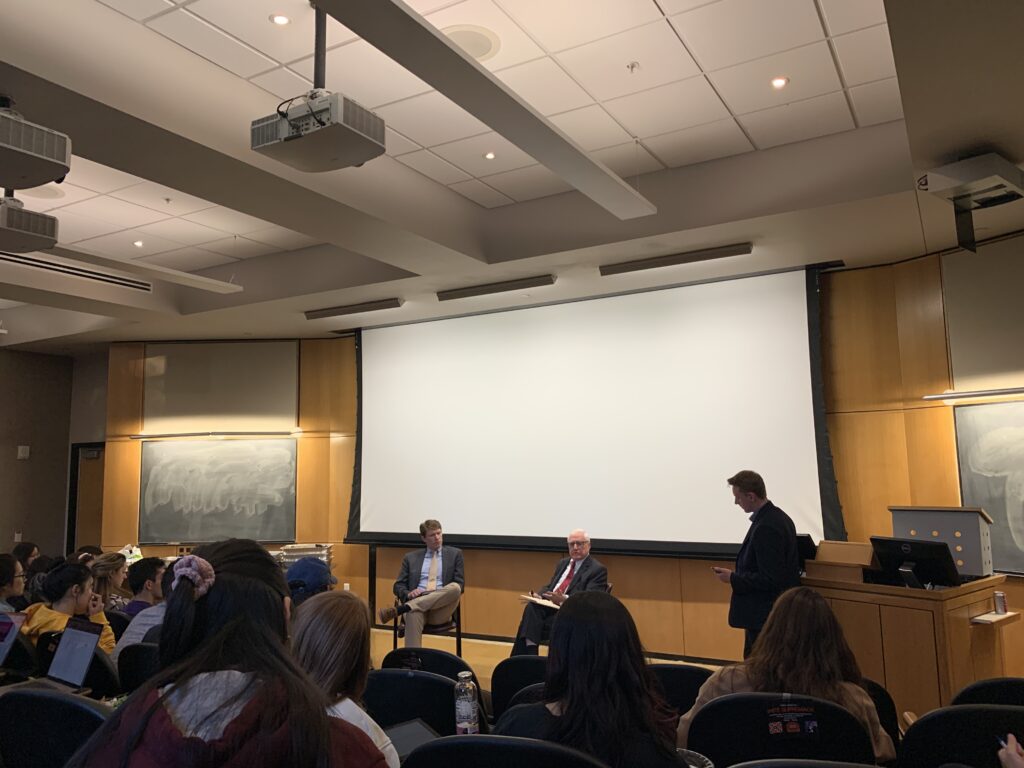 On November 4, Vanderbilt Global China Connections hosted a conversation on China trade policy, featuring Claude Barfield, a former consultant to the office of the US Trade Representative, and Timothy Meyer, a professor of law at Vanderbilt and an expert in international law.

The conversation centered on the US-China trade war and included discussions on President Donald Trump’s trade policy towards China, the effectiveness of tariffs, the role played by the World Trade Organisation, as well as cyber-espionage and Huawei’s current monopoly of 5G technology.

Both Barfield and Meyer believe that Trump’s tariff strategy towards China was not as productive as he had hoped. Meyer expressed that the relationship between economic conditions and political life is not the same in China as it is in the United States, since its government officials do not stand for election every few years. This offers China more capacity to withstand the economic pressures applied through trade sanctions.

Meyer was also skeptical that linking US trade policy to human rights and environmental provisions, as advocated by Senator Elizabeth Warren, will work with China. He stated that since the negotiation of the North American Free Trade Agreement, the US has only managed to hold a weak conditionality on its trading relationships with labor and environmental standards. Barfield added that the Trump administration has for the first time, placed restrictions on Chinese companies that are conducting activities with suspected links to human rights violence. He speculated that the Trump administration did not think through the implications of this policy; Barfield emphasized that it is difficult to apply human rights judgements to countries with differing political perspectives and histories.

Next, Meyer spoke about the role played by international actors such as the World Trade Organization (WTO). He stated that the Trump administration has not only declared a trade war on China but also on the WTO by freezing its dispute settlement system. While the system has proven to be an effective international tribunal system, the US “destroyed it” by blocking the appointment of judges. This makes it difficult for the US to establish new case law and win cases against China, as the judges are not allowed to hear cases.

Meyer further believes that European countries are key to dealing with China both on a trilateral basis, as well as within the WTO because they have the potential to fuel modernization of the organization. However, Meyer asserted that the European Union was very slow to realize the seriousness of shifts in US trade policy. He elaborated that while it is broadly true that Republicans have leaned toward free trade while Democrats have shied away from it, Trump has brought in the same type of people to run economic policies as one would see in a Democratic administration, deviating from this pattern.

On the issue of intellectual property law, Barfield explained that in 2015, China’s President Xi promised President Obama that China would not give secrets discovered through security espionage to Chinese companies. According to Barfield, this promise played out to be a “fat lie.” He suggested that the US should follow a policy of reciprocity towards Chinese companies, such that if Amazon and Facebook cannot be part of the Chinese internet, Alibaba and Tencent should not be part of the US internet.

Barfield also praised Chinese tech company Huawei for its international development. He explained that although Huawei was accused of intellectual property theft, the company has learned its lesson. They increased their spending on research and development and built up a portfolio of patents. Huawei is now the dominant player for base technology related to 5G. Barfield stated that this is a dilemma for the United States because the technology presents a potential strategic threat to US national security. It also poses a challenge for Europeans, who may now need to rip out the billions of dollars invested in Huawei’s 4G technology and move to 5G.

To conclude the conversation, Meyer and Barfield spoke about the current political situation from a broader perspective. They agreed that China is a very patient negotiator while President Trump is not. Hence, China has made the calculation that it can afford to wait and see what happens. If the US enters into an impeachment process, it is unclear whether the administration will have the capacity or interest to do anything about the trade war.