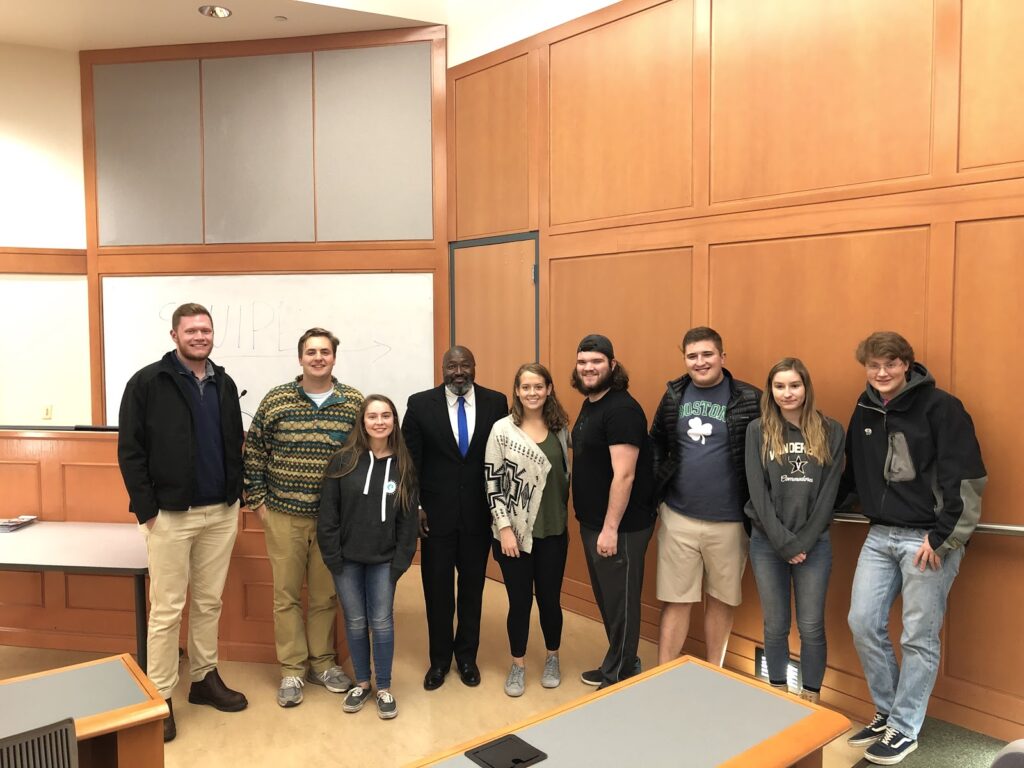 Matthew Charles, a Nashville resident and the first person to be released by the First Step Act signed by President Trump in December, spoke to students in an event hosted by Vanderbilt Young Americans for Liberty on Monday, Nov. 4. Charles discussed his personal story of incarceration and shared his visions for criminal justice reform.

In 1996, Charles began a 35 year sentence for dealing crack cocaine. Stemming out of the War on Drugs, the law at the time mandated a minimum sentence of 30 years to life for his possession and distribution. Having had previous convictions , including domestic violence, drugs, assault, kidnapping, and larceny, the court also labeled him a “career offender.”

After reading a Bible given to him by an inmate he befriended in county jail, he became a Christian. From then on, Charles was a model inmate. He taught GED classes, led Bible studies, and took college courses to become a law clerk. During his 21 years in prison, Charles never received a disciplinary infraction on his record.

After President Obama signed the Fair Sentencing Act in 2010 to reduce sentencing disparities between crack cocaine and powder cocaine possession, Charles appealed for early release which federal Judge Kevin Sharp granted in early 2016. In reviewing the transcripts from Charles’ initial sentencing, Sharp determined that the 35 year sentence had been based on the crack offense and not his “career offender” status, therefore making him eligible for a sentence reduction under the Fair Sentencing Act.

After his release, Charles attempted to start a new life in line with the way he had lived in prison. “I purchased a truck, I was working as a courier, I found a church home, I was given a position as an usher, and I was volunteering my time and services at The Little Pantry That Could,” he said. He lived freely for 22 months until the federal government appealed his sentence reduction, claiming that he had originally been sentenced as a career offender, not based on his crack offense. Despite recognizing his rehabilitation and upstanding behavior, the Sixth Circuit Court of Appeals agreed. Because the Fair Sentencing Act did not reduce sentences for career offenders, the court mandated that Charles finish his sentence. He went back to federal prison in May 2018.

“That’s when incarceration became about incapacitation,” Charles said. “You take a person off the street for a particular period of time and you put them behind bars. Whether that person changes or not, once that time is over, you release them.” By sending Charles back to prison, the court did not care that he had successfully rehabilitated and reintegrated into society. Instead, the court saw him only as someone needing to be incapacitated and needing to finish his sentence.

A story by Nashville Public Radio brought national attention to Charles’ return to prison. Politicians and celebrities, including Kim Kardashian West and Tomi Lahren, criticized the circuit court’s ruling and called on President Trump to use his clemency power to help Charles.

The First Step Act also had the potential to help Charles. It made retroactive the sentence reductions under the Fair Sentencing Act, meaning that those convicted of crack offenses prior to 2010 could petition for release. The act also contained several other provisions. It gave judges the ability to skirt mandatory minimum sentencing guidelines for nonviolent drug offenders with limited criminal histories. Last, the legislation sought to enforce pre-existing policies such as prohibiting the shackling of pregnant inmates, providing rehabilitative services, and offering up to 54 days in sentence reduction for good behavior or “good time credit.”

The First Step Act overwhelmingly passed both the Senate and the House and was signed into law by President Trump in December 2018. Following the enactment, Charles’ attorneys filed a motion for his release under the new law. On January 3, a judge ruled that Charles was “eligible for immediate release.”

Since leaving federal prison, Charles has focused his energy on advocating for reforms. “Lock ‘em up and throw away the key hasn’t done anything except add to the number of mass incarceration. It hasn’t reduced recidivism, it hasn’t reduced crime,” Charles said. “People are realizing that something needs to be done and people are making strides and moving forward gradually to make those changes.”

Charles says the First Step Act of 2018 is one of those strides. However, there remains further work to do, particularly in the rehabilitative aspect of criminal justice. “When you deny a person [housing and employment], just based off the felony stigma, when that has nothing to do with the offense they were incarcerated for, you’re just cutting a person off at his knees and not even giving him a full second chance,” Charles said. Such denials make recidivism more likely and reintegration impossible. Charles himself struggled to find housing after his release in January despite Kim Kardashian West offering to pay five years of rent in advance.

After being released, President Trump invited Charles to the State of the Union Address in February. Trump mentioned Charles’ story while discussing the reforms brought about by the First Step Act and said, “Welcome home Matthew.”

“Every person who is incarcerated with an excessive sentence wants to hear those same words when they return,” Charles said of Trump’s statement. “That’s the reason that’s one of my goals. One of my main focuses is to make sure that people are able to hear those words.”