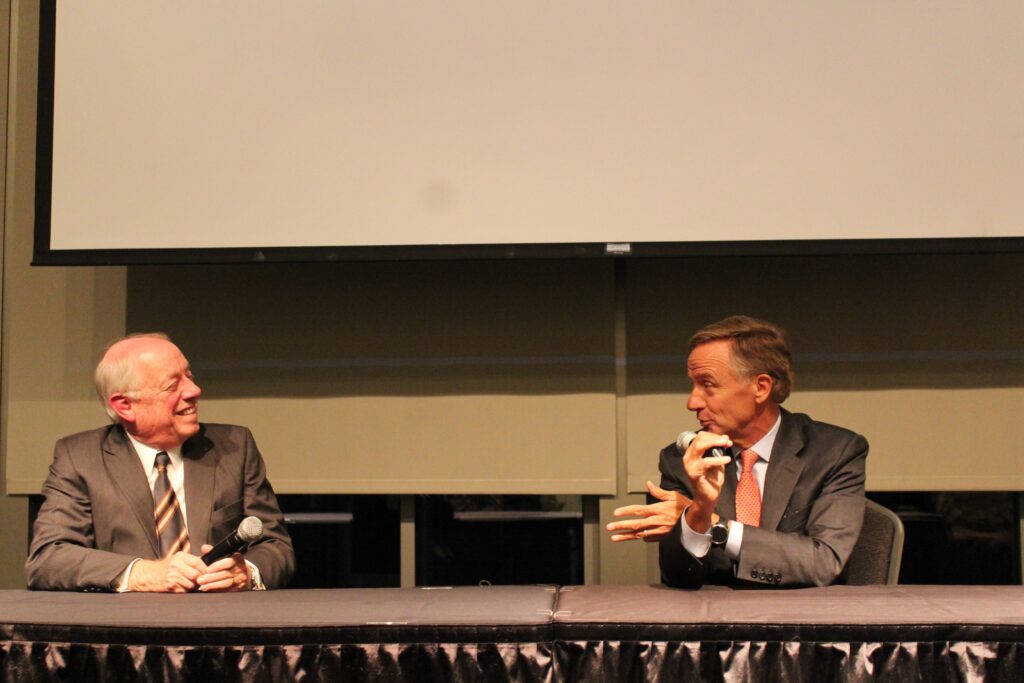 In an era of intense political polarization at the national level, Tennessee’s two most recent governors, Democrat Phil Bredesen and Republican Bill Haslam, offered their perspective on bipartisanship and effective leadership to an audience at Vanderbilt on Tuesday night.

The event, which was moderated by Professor Alan Wiseman, was co-organized by the Vanderbilt College Democrats and College Republicans as part of their Week of Bipartisanship. During their talk, the two governors reflected on their experience at the helm of Tennessee state government and opined on both the causes of and potential solutions to political partisanship throughout the country.

Though members of different parties, Bredesen and Haslam share a number of similarities. Bredesen, a former businessman who served as Mayor of Nashville from 1991 to 1999, was elected governor of Tennessee in 2002. During his tenure as governor, Bredesen was largely seen as a pragmatic leader who reformed Tennessee’s healthcare and education sectors. He won all 95 of Tennessee’s counties during his reelection in 2006.

Like Governor Bredesen, Bill Haslam moved from a business career to one in politics, serving as Mayor of Knoxville from 2003 to 2011. Because Governor Bredesen was term-limited, Haslam was elected to the open governorship, where he served from 2011 to 2019. During his tenure, Haslam was consistently one of the most popular politicians in Tennessee due to his effective, sensible leadership style. After leaving office, Haslam joined Vanderbilt’s faculty as a visiting professor in the political science department.

The similarities between the two governors were reflected in their insights on this polarized era. Both Haslam and Bredesen began their talk with a frank assessment of the state of national politics. The two governors were uncomfortable with the rising level of partisanship, particularly in how it manifests itself in the media. Haslam expressed his concern that each American can search for the news that they wanted to hear, ignoring other viewpoints and facts. For Bredesen, this was deeply concerning, as he felt that a central tenet of a healthy democracy is the willingness of people to find common ground, something that is precluded by partisan media.

Having discussed polarization at the national level, Bredesen and Haslam provided insight on how they were able to work through partisanship during the governorships. Both Haslam and Bredesen attributed their success in office to their willingness to take principled stances, regardless of the political consequences. For Haslam, great leadership is finding a problem and working to discover the most effective solution, regardless of what one’s own answer is. He remarked that sometimes real leadership involved “going against your political base to get things done.” Bredesen agreed with this assessment and offered his work to reform TennCare as an example of taking a principled, yet potentially unpopular position. Bredesen cited his landslide reelection victory following his TennCare reforms to show that voters reward politicians who clearly explain their motivations for pursuing certain policies.

After discussing their work in Tennessee, Bredesen and Haslam again turned their discussion to the national level, offering their opinions on how to move past the partisanship of the current political climate. Although both governors acknowledged that there are not clear answers, Haslam and Bredesen stressed the importance of politicians developing a long-term strategy for political success. The governors remarked on how short-sighted, transactional politics have become the norm throughout the country. This has contributed to cynicism pervading throughout the population, in turn contributing to apathy, low voter turnout, and a decrease in civic engagement. Both Haslam and Bredesen were adamant that this trend would be harmful to the United States’ future as a thriving, representative democracy.

Despite their concern over the state of American politics, Bredesen and Haslam ended their talk on a positive note. The two former governors urged the students in the audience, a politically diverse group, to reach across the aisle and form personal connections with those with differing viewpoints. For Haslam and Bredesen, these relationships can begin to change the culture of partisanship that has divided our nation along political lines. Both men agreed that mending this divide will strengthen our country and facilitate the bipartisanship that our nation needs.