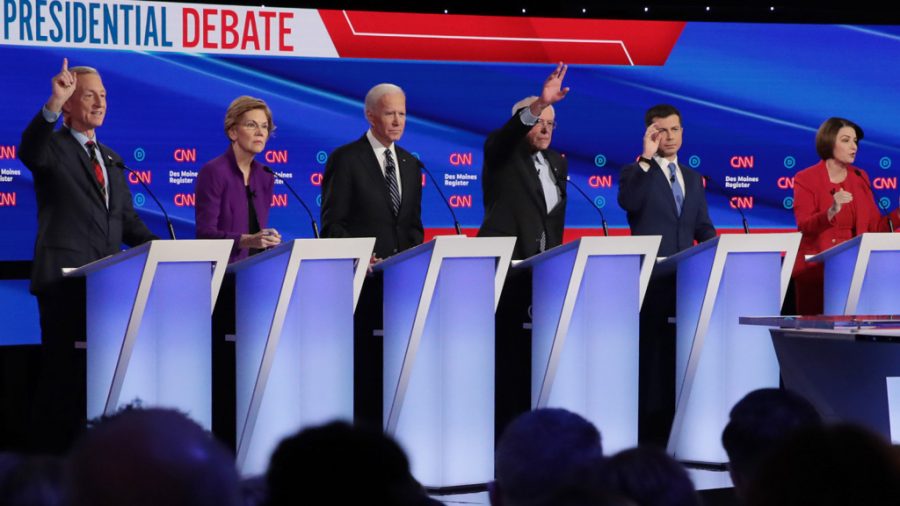 Iran: “It was a mistake”

The final Democratic debate before the Iowa caucuses kicked off with a discussion about Donald Trump’s latest foreign policy move – the assassination of Qasem Soleimani, which brought the US to the brink of war with Iran. Bernie Sanders went first, reminding everyone of his vote against the Iraq War in 2002, what he sees as the worst foreign policy blunder in recent history. He says he made this decision based on his foresight into the fallout an invasion would cause and his sense that Dick Cheney and George Bush were lying about the presence of WMDs. When pressed on why he voted for the war in Afghanistan while claiming to be stridently anti-war, he pointed out that every single member of Congress, save one, voted for it.

Joe Biden was asked why he voted to authorize the Iraq War, on the other hand. He quickly admitted it was a mistake and tried to shift the focus onto his experience with other foreign policy projects as Vice President. He also stressed that he opposed the troop surge in Afghanistan and led the effort to bring the troops home from both wars.

Amy Klobuchar was then asked why she thought her foreign policy experience was more important than that of Pete Buttigieg, whom she attacked for his relative lack of governing experience in the previous debate. She said that she opposed the war in Iraq and has wide-ranging experience on various Senate committees that deal with foreign affairs. She stressed that Donald Trump is taking us into war and that that must be stopped. Pete responded that his experience comes from his enlistment in the war in Afghanistan. He also stressed that modern warfare will expand into new frontiers, such as cyberwarfare.

Elizabeth Warren was then asked a loaded question about voters’ lack of confidence in her foreign policy ability. She argued that she’s on multiple foreign policy-related Senate committees as well, and has three brothers who served in the military. She also stressed that we need to cut our burgeoning military budget, which requires shutting the revolving door between the Beltway and firms that lobby for military contractors.

Tom Steyer tried to use his experience as an international businessman to his benefit, saying that he has traveled around the world to cultivate the proper judgment necessary to make foreign policy decisions. He argued that an outside perspective is often what is necessary to shake up decades of blunders by the US government.

Bernie reminded everyone that the Iran nuclear deal was working before Donald Trump backed out of it, and that we need an international coalition to renew the agreement. Biden interjected that he was involved in crafting the initial deal, and would be best suited to getting a new one together. All the candidates were then asked whether they would leave an American military presence in the Middle East; every candidate except for Sanders and Warren said that they would in varying capacities.

A popular Democratic criticism of Trump’s assassination of Soleimani is that he escalated the conflict without Congressional approval. Biden was asked whether he would partake in military action without such approval and he answered in the negative. The moderator cornered him here by reminding him that he and Obama undertook multiple military actions without Congressional approval. Biden argued that they had the Authorization for Use of Military Force (AUMF) from 2001, which gave the executive branch a blank check to attack terrorists. However, this is the same justification Trump is using to justify his attack. Pete argued that the AUMF is outdated and promised that any authorizations he will pursue as president will have a three year sunset period.

The moderators then shifted to a discussion about trade. Sanders was asked why he has refused to support the United States-Mexico-Canada Agreement (USMCA), Trump’s reworking of NAFTA. He has conceded that it would be a modest improvement on NAFTA, so his lack of support makes it look like he’s unwilling to compromise. He argued that trade agreements are not easy to build, as they require international discussion and cooperation. He believes that if this one were to pass with its current language, the progressive trade cause would be set back three years. His primary concern about the agreement is that it does not mention the word “climate change” anywhere in it, which he believes is the biggest existential threat to our survival.

Warren was asked to defend her support of it next. She holds that she opposes NAFTA and the TPP, but that people are hurting because of the trade war with China. Tom Steyer noted that the trade war with China has hurt US farmers because of tariff increases, while the USMCA is a “trade” deal insofar as it loosens restrictions on the transnational flow of capital, which are two separate components of trade. In fact, every candidate other than Sanders and Steyer chimed in to voice their support for the deal. Sanders received yet another question on the issue, when he reminded us that NAFTA and PNTR cost the US over four million jobs due to outsourcing. Biden explained that we can use enforcement mechanisms to prevent that from happening again, but that we need this alliance with Canada and Mexico to oppose the rise of China.

Sanders/Warren Drama: “Only the women”

The moderators finally indulged the tabloid drama that has monopolized social media over the past few days – whether or not Sanders told Warren in a private meeting that a woman could not win in 2020. He started off by strongly denying that he ever said such a thing. He then implored everyone watching to go on Youtube and find videos of him in 1987, telling a classroom full of girls that they should pursue public office and become president. He also reminded the audience that the only reason he decided to run in 2016 was because he pushed Warren to run against Hillary Clinton, but Warren refused. He concluded by saying that Clinton already beat Donald Trump by three million votes. Considering all of these points, Sanders made a strong argument that it is ludicrous to think he would say anything along these lines to Warren.

In a bizarre display of media bias, the moderator then turned to Warren and simply asked her what she thought when Sanders told her a women could not win. Warren said that she disagreed, and then pivoted away from the issue to deliver a passionate speech about how women have done an unprecedented job winning elections in the Trump era. This was more or less the biggest moment of the night. She concluded by making her case for being a unifying force in the Democratic party, with the ability to pull together a faction of both Sanders and Biden supporters.

Healthcare: “How do we pay for it?”

The discussion on healthcare started with Bernie. He was asked how much Medicare for All would cost, because he has so far only provided loose estimates. He argued that it doesn’t matter what the exact price tag will be, because it will end up costing at most half as much as the current sum total of health expenditures in the US. He reiterated his tried and tested talking point that the US pays more for healthcare in the entire world, while still experiencing worse health outcomes. This means that under Medicare for All, regardless of what the final price tag is, average families would pay much less. He was also asked what would happen to people who currently work for private insurance companies, to which he replied that his plan includes a five year transition plan for such workers, offering them an income, healthcare, and job training while they find new work.

Biden was not going to let him off easy, however. He argued that even a 4% increase in the income tax would not pay for Medicare for All. He implored the audience to consider expanding the Affordable Care Act and building upon the foundation that President Obama laid down. Sanders responded that the current system involves the average worker paying 20% of their income per year on healthcare, so a tax increase of 4% is relatively insignificant. Klobuchar tried to portray herself as the voice of reason by pointing out that two-thirds of Democrats in the House do not support Bernie’s bill. The solution, in her view, is a public option with guarantees for mental health and long-term care.

Warren shifted the discussion to the skyrocketing price of prescription drugs. She also mentioned that her healthcare plan does not include a penny in tax increases, unlike that of Sanders. It is interesting to note that she did not use the phrase “Medicare for All” throughout the debate, signaling a shift away from her previous alignment with Sanders on the issue. Klobuchar mentioned that Warren’s change of heart may imply that the moderate wing of the party was right about this issue from the very start.

Buttigieg was then asked why his public option plan automatically enrolls uninsured individuals and forces them to pay for it, given his stated intent of giving individuals freedom of choice. He argued that that aspect of his plan is similar to Obamacare’s individual mandate. His strongest conviction seemed to be that no one should be kicked off of their private insurance plans and enrolled in a government option. Both he and Klobuchar begged everyone to consider the growing federal deficit when making their proposals.

Climate Change: “How do we pay for it?”

With half an hour left in the debate, the moderators initiated a discussion on climate change, which many Democrats hope will be a central issue in 2020. Buttigieg was asked what he would do about families living on farms that cannot be moved when flooding increases. He did not respond to that question directly, but instead waxed poetic about how important it is to take action on climate. Steyer highlighted his decades-long commitment to fighting climate change and explained that that issue alone is the reason he entered the race. Warren chimed in by linking climate change to excessive corruption in Washington, her signature issue. She believes that none of this would have happened if politicians were not so closely involved with fossil fuel lobbyists.

Klobuchar was asked whether she would ban fracking, and she responded with a straightforward no. She believes that natural gas is a transition mechanism to a carbon neutral future. When it was Sanders’ turn to respond, he was clearly disappointed with the timeframes presented by the other candidates. He argued that our energy systems need to dramatically move away from carbon by 2030 if we are going to stand a chance at saving the planet. Biden reminded everyone that he actually introduced climate change legislation in 1986, far before the issue had entered popular consciousness.

The candidates were then asked individual questions specific to their campaigns. For example, Buttigieg was asked about his lack of African American support and Bernie for his identification as a “democratic socialist.” Overall, it remains to be seen what effect this debate will have on the polls. The Sanders/Warren moment in particular has the potential to shake up their respective bases, depending both on 1) whom voters believe and 2) whether the reminder that there has never been a woman president will turn Sanders supporters to Warren. With the Iowa caucuses just two weeks away, we will not have to hold our breaths for long.