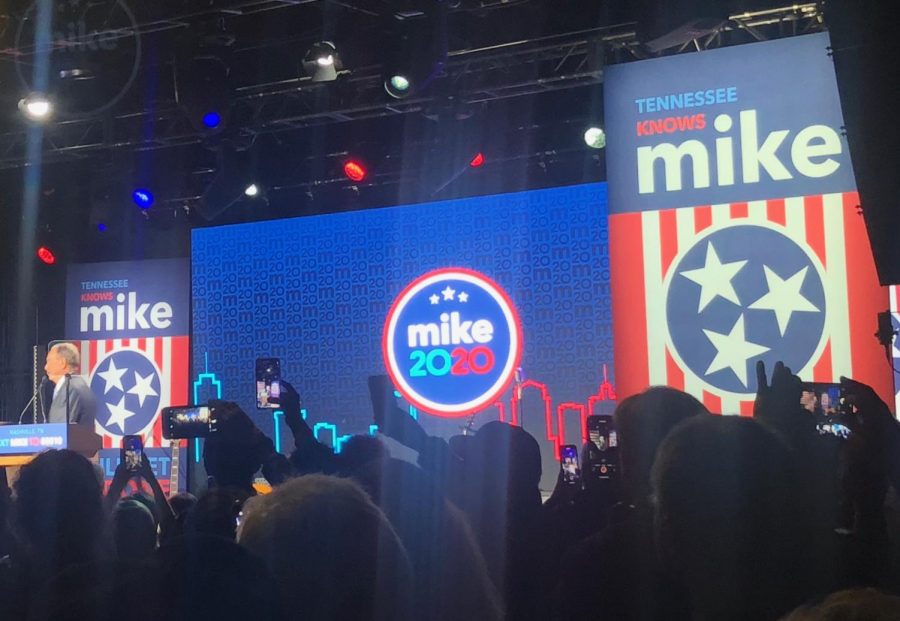 “I am running to defeat Donald Trump,” former New York City mayor and 2020 Democratic candidate for president Michael Bloomberg announced to a packed crowd at Nashville’s Rocketown music venue Wednesday evening. Bloomberg, a former Republican and late entrant to the presidential race, first made his mark on the Democratic Party’s national landscape with a widely promoted speech at the 2016 Democratic National Convention.

Bloomberg’s unconventional campaign strategy of focusing on states with later primary dates has compelled him to court Tennessee Democrats, who will go to the ballot box on March 3. The Bloomberg campaign gave the event the feel of an authentic Nashville evening; those in attendance were greeted with barbecue sandwiches and sweet tea, as well as performances by hometown musicians Will Hoge and Mandy Brooke. Each side of the stage prominently featured a sign proclaiming, “Tennessee knows Mike… will get it done.” The candidate himself even referenced the state’s nickname when encouraging the crowd to offer their services to the campaign, asking, “Where better to find volunteers than in Tennessee?”

The campaign’s unique electoral strategy means that Bloomberg provided a presidential election rally rare in Tennessee during the peak of Iowa/New Hampshire/Nevada/South Carolina season. Although Bloomberg is not especially popular on college campuses, some Vanderbilt students were able to attend the event on Wednesday. Freshman Anneliese Breidsprecher told the Vanderbilt Political Review, “For my first presidential rally, I was pleasantly surprised. Bloomberg’s speech held my attention, the crowd was lively, and I learned a lot from the experience.”

Mayor Bloomberg’s message was crystal clear: he can beat President Trump in November. This argument was the dominant theme of his speech and corresponds to his biggest asset in the race, his perceived electability. He repeatedly called himself “the un-Trump,” and even provided a taste of Trumpian trash-talk, boasting, “I’m not afraid of Donald Trump. Donald Trump’s afraid of me.” This strategy resonated with the audience and is almost certainly the most common explanation for support of his candidacy. One attendee asserted, “He’s the only one that could beat Trump.” Another woman echoed this mindset after the speech, calling the billionaire “the best matchup against Trump.”

Bloomberg’s policy specifics were those typical of a moderate Democrat in 2020: he wants to raise the estate tax, pass gun control legislation, combat climate change, nominate pro-choice judges, avoid a tax increase on the middle class, and allow Americans to keep their private insurance plans. Two numbers that resonated particularly well with the crowd were statistics related to Bloomberg’s record on education, namely his increase of teacher salaries by 43% and improvement of graduation rates by over 40%.

The event was not without dissent, however, as a handful of protesters bore the pouring rain to display a Gadsden flag, a “Mini Mike Take a Hike” sign, and a poster mocking the “Apology Tour 2020.” In addition to these presumably right-wing activists outside of the venue, a male demonstrator interrupted the beginning of Bloomberg’s speech, yelling, “Mike bragged about terrorizing inner city youth!” This accusation, of course, referenced a newly-surfaced video of the previously scandal-free candidate defending NYC’s “stop-and-frisk” policy in 2015. In the moment, Bloomberg offered a humorous response, announcing, “I’d just like to thank him for making me feel like I’m at home.”

However, the campaign’s messaging throughout the evening clearly sought to diminish the effects of this revelation on its momentum, as Howard Gentry Jr., Nashville’s first black Constitutional Officer, referenced Bloomberg’s increasingly strong support among black voters. Although directly defending the racially-biased stop-and-frisk policy would be ill-advised, especially in a Democratic primary, Bloomberg touted his record of decreasing murders by 50% during his mayoral tenure.

Ultimately, though, this campaign stop was tailor-made for what Democratic primary voters say they want. Polls consistently show Democrats are looking for a candidate with the chops to win the general election and are willing to sacrifice some ideological purity to achieve that goal. The 77-year-old New Yorker told the crowd he only joined the race because “Trump was on track to win.” Accordingly, Bloomberg closed with the rallying cry, “Let’s go win this!”