Speaking at Vanderbilt, John Bolton and Susan Rice Trade Barbs, Perspectives on Impeachment and America’s Role in The World 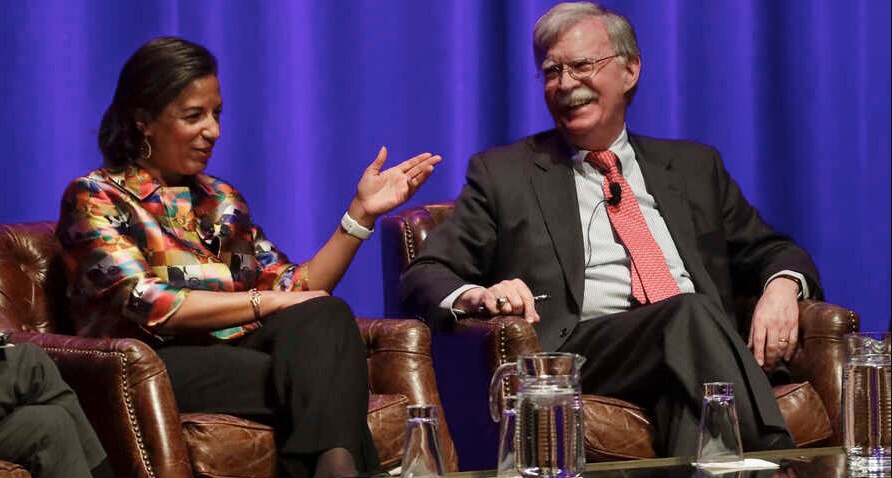 Addressing an overflowing crowd at Langford Auditorium on Wednesday night, Ambassadors John Bolton and Susan Rice spoke about a wide range of charged issues, including their roles in several presidential administrations, the foreign policy decisions they had helped craft, and, unsurprisingly, Ambassador Bolton’s role in the now-infamous Ukraine affair.

Ambassadors Bolton and Rice were invited to speak as part of Vanderbilt’s Chancellor’s Lecture Series, which has focused on fostering conversations about our increasingly interconnected world.

This event marked the first time that Ambassadors Rice and Bolton, two of America’s most prolific foreign policy experts had shared a stage together. Although Rice and Bolton overlap very little in terms of ideology, their backgrounds are remarkably similar. Between 2005 and 2006, Bolton served as United States Ambassador to the United Nations during George W. Bush’s presidency, a position that Susan Rice held during the first four years of Barack Obama’s tenure in the White House. Both Ambassadors Bolton and Rice also served as National Security Advisor to presidents Bush and Obama, respectively.

Ambassador Bolton, who is known for his hawkish foreign policy views, has been at the center of national politics due to his role in the Trump-Ukraine scandal. Ambassador Bolton has suggested that he has a first-hand account of misconduct by President Trump, and his potential testimony was blocked by Senate Republicans in a contentious vote in late January.

The event began with both Ambassadors Rice and Bolton, much to their surprise, agreeing about the function of the National Security Advisor. Ambassador Rice compared the position to that of a point guard on a basketball team, whose responsibility is to see the entire court and, without seeking recognition, facilitate more high-powered actors to perform their job. In agreeing with this characterization, Bolton underscored the fact that the National Security Council, of which the National Security Advisor is the head, must adapt to the style of the President that it is serving. With that being said, Bolton also expressed discontent for the disjointed nature of decision making within the Trump White House. For both Bolton and Rice, this confusion stemming from the president makes it difficult for the national security apparatus to function effectively.

Having discussed the role of the National Security Advisor in more abstract terms, the moderators guided the conversation to the issue of Ukraine. Ambassador Rice was adamant that President Trump’s actions constituted a gross abuse of power that was willingly overlooked by Republicans in Congress who, in her opinion, had abdicated congressional ability to ever again check the power of the president. Ambassador Bolton, who has declined to offer much insight on the president’s actions outside of allusions to his soon-to-be-published book, was quite pointed in his criticism of the impeachment process. Ambassador Bolton drew jeers from the crowd by remarking that “the House made a mess” of impeachment, turning it into a “grossly partisan” process with a predetermined outcome.

In the most contentious point of the evening, Ambassador Rice pointedly rebuked Ambassador Bolton’s criticism of the impeachment process and his decision not to speak publicly about potential presidential abuses of power. For Ambassador Rice, it would be “inconceivable” that a public servant would refrain from speaking publicly about presidential transgressions. In a remark that received a full round of applause from the audience, Ambassador Rice stated, “I would feel that I was shamefully violating my oath to defend the Constitution.” Ambassador Rice’s statements seemed not to bother Bolton as he explained that he sleeps perfectly well at night knowing he has followed his conscience.

Following the intense discussion on impeachment, the moderators asked the ambassadors how they felt about some of the foreign policy mistakes made during each of their times working in the White House. Ambassador Bolton made it clear that he didn’t feel responsible for the outcome of the Iraq War, which he supported while working in George W. Bush’s White House. With a laugh, Bolton remarked that “if only” he had been the architect of the Iraq War, as many of his critics have charged. Instead, Bolton stated that he had only had input on the decision to depose Saddam Hussein. According to Bolton, he didn’t make any of the decisions made by the United States following that early point in the war, as the United States attempted to create a stable democracy in Iraq.

For Ambassador Bolton, this kind of nation building is a waste of time. Instead, Bolton stated that the United States should work to overthrow anti-democratic leaders and then allow the people of these countries to make decisions about the future on the own. Bolton suggested that following the removal of Saddam Hussein from power, the United States should have given the Iraqi people a copy of the Federalist Papers and left the country altogether.

In response, Ambassador Rice cautioned that advocating for regime change without taking responsibility for the consequences is an unwise strategy that has been proven to fail several times throughout the United States’ history. Moreover, Ambassador Rice warned that this mindset threatens to squander the sacrifices that our armed forces have made in advocating for democracy throughout the world.

In their closing remarks, the two ambassadors reflected on what they believed were the largest threats to the United States in the future, touching on issues as wide ranging as Russia and China to climate change and pandemics. Both Ambassadors Bolton and Rice agreed that addressing these challenges head-on would require prudent decision making on a variety of fronts.

In an obvious reference to the White House, Ambassador Rice expressed doubt that our current government was capable of effectively handling these issues that could prove to be existential threats to the survival of the United States as a global leader. With a laugh, Bolton, who earlier had stated that he was “in enough trouble already” with the White House, suggested that Rice’s comment marked a perfect moment to end the event. The event concluded with the two Ambassadors sharing a laugh in front of an applauding crowd.