Op-Ed: Should America be the Champion of Democracy? 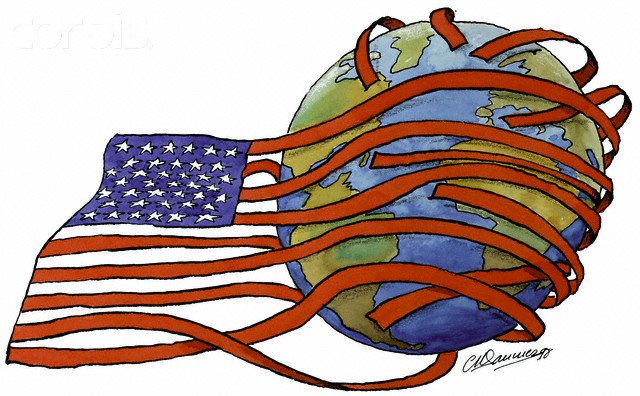 The United States’ efforts to promote democracy since the Cold War have had a mixed track record: a few successes marred by the effects of crippling economic sanctions, humanitarian crises, and unstable regimes. In fact, of the thirty-five US military interventions between 1946 and 2004, only one was objectively successful in establishing a stable democracy. These failed interventions not only cost taxpayer dollars and countless lives but have also threatened the United State’s legitimacy as a benevolent superpower. This raises the question: Should America be the champion of democracy?
Intervention Policies: Between a Rock and a Hard Place
Historically, the United States has typically relied on two methods of democracy promotion: military intervention and economic sanctions.

According to political scientists Bueno de Mesquita and George Downs, the United States is particularly ineffective at establishing democracies because its economic interests often conflict with its desire to spread democracy. This, however, is by design. The United States would rather create “pseudo-democracies” that appear to support democratic values and indirectly serve American interests rather than risk establishing a democratic government that may not protect its economic and political interests overseas.

A potent example of this can be seen in the United States’ covert support for the 1954 coup d’état in Guatemala that deposed the democratically elected president. The decision to support the coup stemmed, in part, from lobbying by the Boston-based United Fruit Company which had lost land to the social reform of the new president. This resulted in the installation of a “friendly” military dictatorship that protected the fruit company but destabilized Guatemalan society through decades of violence and political oppression.

Needless to say, while manipulating existing democracies and establishing autocracies sympathetic to the United States have been successful in protecting American special interests, they have resulted in gross violations of human rights, economic unrest, and the collapse of legitimate democratic institutions. Clearly, military intervention is an outdated and ineffective foreign policy tool that fails to establish democracy on nearly every occasion.

Economic sanctions are a popular alternative to military intervention because they are less costly, both economically and politically. In the past, the United States has employed economic sanctions as a precursor to actual intervention, with a desire to instigate internal unrest through external pressure and bring about a regime change without the use of military force. In reality, however, unilateral economic sanctions are relatively ineffective. In fact, according to a report by the Peterson Institute for International Economics, two out of every three US sanctions between 1970 and 1990 failed to accomplish any policy objectives.

Furthermore, the economic and humanitarian impacts of economic sanctions rarely instigate popular unrest against the national government as they are intended to. Instead, the effects of these sanctions feed nationalistic sentiments that oppose the United States’ involvement, thereby undermining current and future efforts to democratize the country. Although there are some arguments to be made in favor of US intervention, this evidence suggests that the cost of intervention far outweigh the potential benefits.
An Alternative: International Institutions
With multilateral support and the apparatus to effect change, the United Nations (UN) is an ideal candidate for democracy promotion. Despite its constraints – namely conflicting interests in the Security Council and the lack of legal power – the UN has taken significant steps to encourage democratization around the world.

The United Nations Democracy Fund (UNDEF), for instance, is a multilateral trust fund that supports projects and organizations that work to “empower civil society, promote human rights, and encourage the participation of all groups in democratic processes.” By supporting “demand-side” democratization efforts the UNDEF directly empowers individuals and organizations to inspire political change.

Another institution that is seldom considered a promoter of democracy is the World Trade Organization (WTO). Adoption of free-market economic standards and participation in WTO forums have been linked to a higher quality of democracy in some states. Furthermore, economic development through increased international trade has also been correlated to an increase in democratic values, thereby increasing the likelihood of self-democratization.

These institutions are just some of the many regional and international organizations that have been and continue to be effective promoters of democracy.
Looking Forward
Past and present US democracy promotion efforts have been, at best, ineffective and have, at worst, resulted in long-term crises. From Guatemala to Vietnam, the United States has left a wake of death and destruction in the purported pursuit of democracy. Instead of ushering in the peace, stability, and economic prosperity that they promise, these interventions routinely undermine existing democracies and endanger civilians in favor of American special interests. Clearly, the time has come for international organizations to step up and replace the United States as the champion of democracy.