“I Will Breathe” Rally Sees Nashville Stand Up Against Police Brutality 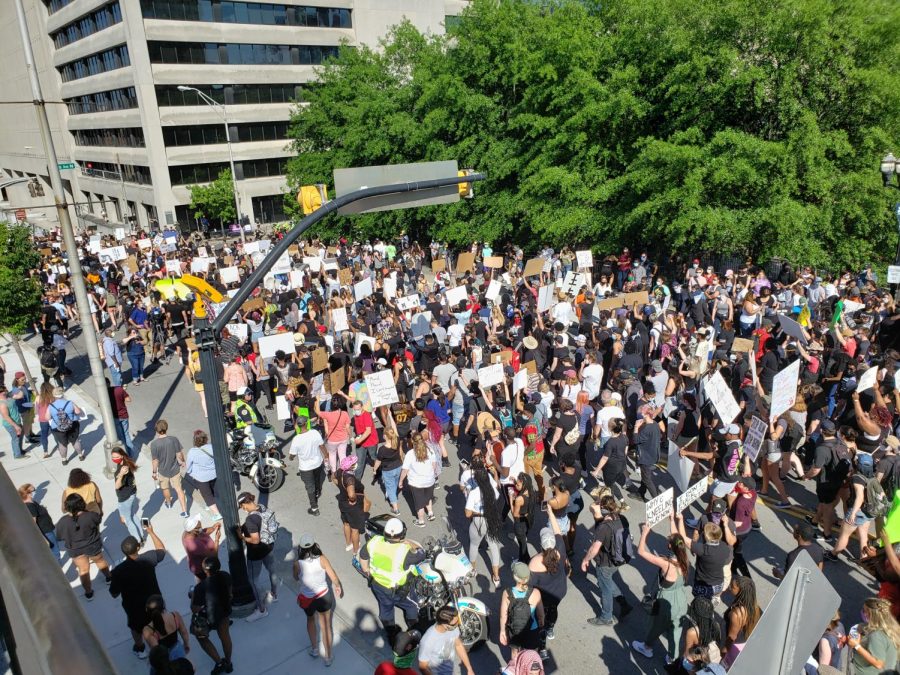 In the wake of another string of police brutality incidents, thousands gathered in Nashville on Saturday for the “I Will Breathe” rally. The event was organized by activists Hammid Abdullah and Venita Lewis in conjunction with groups such as The Brothers Round Table, the NAACP, Gideon’s Army, the Equity Alliance, and the African American Cultural Alliance.

The event began as a gathering in the Legislative Plaza, directly in front of the State Capitol building in downtown Nashville. Demonstrators showed support with signs depicting George Floyd, the victim of deadly force at the hands of Minneapolis Police last week, as well as the names of others affected in similar racially-motivated incidents, such as Breonna Taylor, Ahmaud Arbery, Eric Garner, and Tamir Rice. In addition, local activists including Justin Jones, Danielle McGee, Keith Caldwell, and Tequila Johnson addressed the crowd and called for action from local political leaders and from citizens at the voting booths. Moreover, the speakers called for harmony among the oppressed community and a thoughtful and peaceful response to the injustices forced upon them. Frequently during the rally, crowds could be heard chanting the phrases, “I Can’t Breathe,” “No Justice, No Peace,” and “F— the Police.” According to the organizers, more than 10,000 people attended the rally. 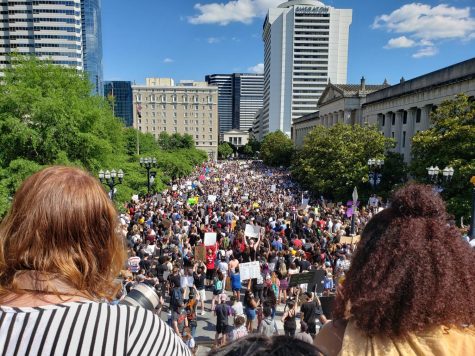 Demonstrators were extremely motivated to show their disdain with the current system of racial injustice in the United States. One protester decried “the serious moral failings of the police” and how they have brought terror into his community. Another recounted how these incidents reflected “the lethargy of our country in responding to serious issues of racial inequality” and how “nothing has really changed for decades.” Clearly, many had reached a breaking point with law enforcement and wanted to voice their frustrations. Police, on the other hand, remained evasive when asked about the demonstration. Some refused questions entirely while others responded vaguely that they were unaware of the motivations behind the protest but suspected it was related to the events that transpired in Minnesota.

Several members of the Vanderbilt community were in attendance as well. Justin Jones, a student at the Vanderbilt Divinity School and candidate for Congress representing Tennessee’s 5th District, was among the first speakers at the rally. Other students and alumni joined in the demonstration, showing their support for those victimized by police violence.

After about 90 minutes, the event transitioned from a rally into a march as the crowd moved east along Dr. Martin L. King Jr. Blvd. What began as a peaceful protest soon evolved into violent altercations between demonstrators and police. Protesters soon converged around the central police precinct on Korean Veterans Blvd. and began throwing rocks and bottles. Others took to the police cruisers, smashing the windows and trying to light them on fire. According to Commander Gordon Howey of the Metro Nashville Police Department (MNPD), police responded by making arrests without the use of pepper spray, though those in the crowd claimed it had been deployed. By 6 p.m., police in riot gear and horses arrived on the scene, hoping to prevent further damage. However, the conflict was not subdued as the crowds continued to pelt the officers and horses with rocks. 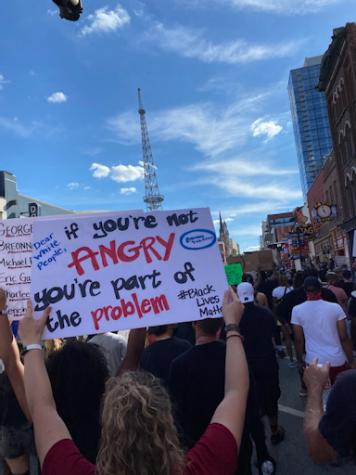 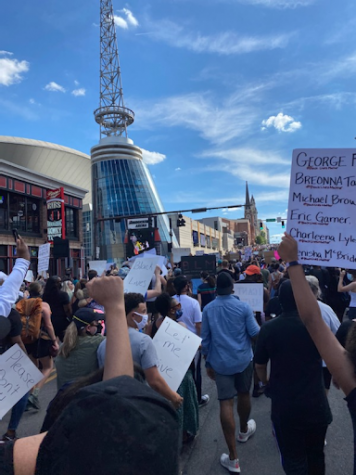 Demonstrators soon took to Broadway, spraying Bridgestone Arena and other areas with anti-police graffiti. At the same time, others swarmed the building which houses the Metro Nashville Courthouse and City Hall. There, demonstrators smashed windows, sprayed graffiti, and lit fires. Riot police soon arrived, physically restricting those present and using tear gas to break up the crowds. 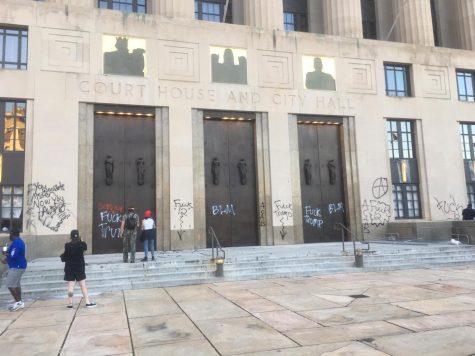 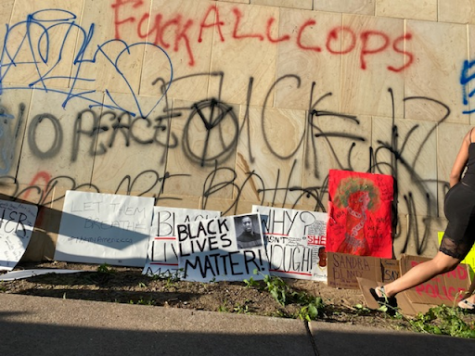 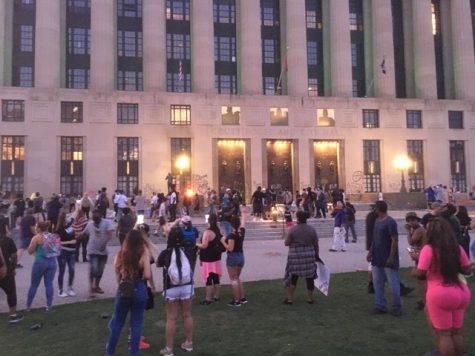 At 8:45, Mayor John Cooper announced he had signed Executive Order No. 9, declaring a state of civil emergency in the city of Nashville. Simultaneously, Metro Nashville Police declared a 10 p.m. curfew in the city, meaning those in violation would be subject to arrest. Less than half an hour later, Governor Bill Lee stated that he had authorized the Tennessee National Guard to intervene in the protests at the request of Mayor Cooper. 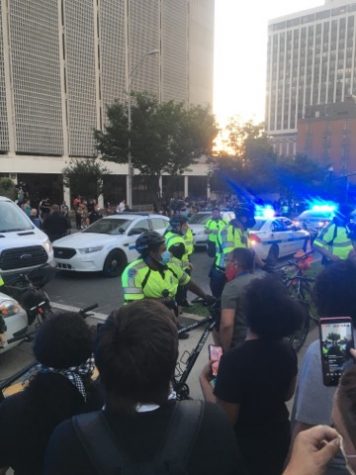 Those involved with organizing the initial rally quickly distanced themselves from the violence that followed the event. The Equity Alliance, through their Co-Founders and Co-Executive Directors Charlane Oliver and Tequila Johnson, condemned the violence and the destruction of private and public property. Furthermore, they insisted that those perpetrating these events were not involved with the original event, which was intended to be an entirely peaceful protest. Oliver, a Vanderbilt alumna, emphasized that the rioters who defaced property were “outside agitators” and were not involved with the protest.

In assessing the damages to the city following the riots, Metro Nashville Police stated that 30 buildings and businesses were damaged Saturday night. Most of the affected areas were in downtown Nashville and along the Broadway strip. Additionally, the MNPD announced that 28 arrests were made in relation to the event. However, this number may increase as law enforcement are still searching for suspects who defaced the Historic Courthouse and arsonists who set fires across the city. The city government also announced a further 8 p.m. curfew for Sunday night and another from 10 p.m. on Monday night until 6 a.m. on Tuesday morning as officials attempt to regain control of the area. It remains to be seen if restrictions will remain in place beyond this and how authorities intend to de-escalate tensions with the city.