OP-ED: Whom Should We Celebrate? 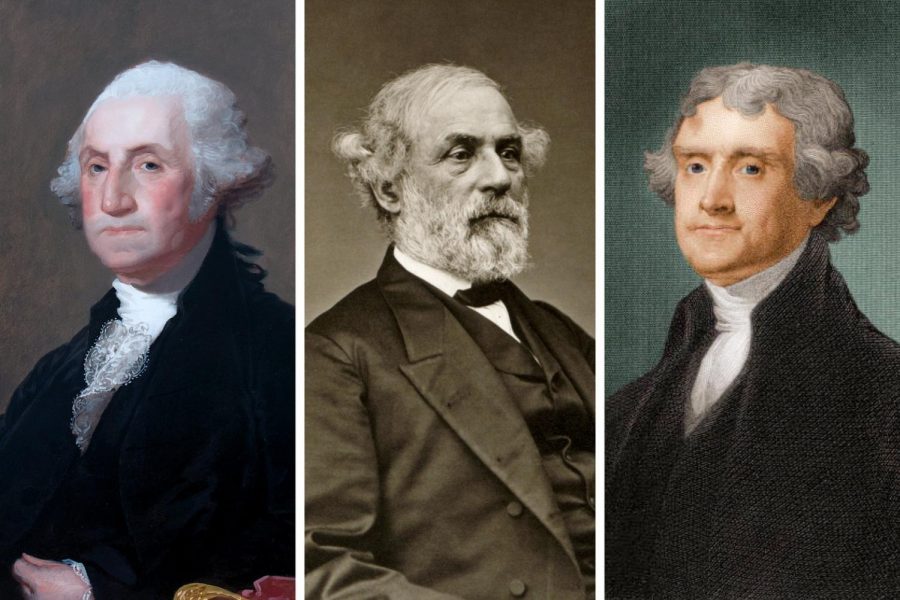 from left: Gilbert Charles Stuart; via Library of Congress; via Getty Images (via New York Times, 2017)

The nationwide protests sparked by the death of George Floyd have reignited the age-old debate over the role of historical monuments. More specifically, the question of which historical figures are worthy of celebration in public spaces has emerged into public discourse.

Statues honoring Confederate leaders, most notably Robert E. Lee and Jefferson Davis, make their presence known throughout the South (and, interestingly enough, a few places in other regions of the country). The Confederates, of course, were traitors who unsuccessfully fought to preserve our nation’s gravest injustice: the “peculiar institution” of slavery. Nearly every such monument was erected decades after the Civil War to advance the Lost Cause ideology that reinforced Jim Crow. At its core, proponents of the Lost Cause argued the Confederacy did not stand simply for slavery, but rather for “states’ rights.” According to the Confederate Vice President Alexander H. Stephens, however, white supremacy was in fact its “corner-stone,” and state secession documents are textbook examples of white supremacy. In fact, southern pro-slavery advocates supported a strong federal government to promote their own agenda. For example, New York Governor William H. Seward found himself on the receiving end of southern wrath when he refused to extradite a fugitive slave from Virginia.

At the same time, monuments to some of the greatest heroes in American history have become the target of  some protesters. For instance, a San Francisco statue of Union General and subsequent 18th U.S. President Ulysses S. Grant was toppled earlier this month. In response, Congressman James Clyburn (D-SC) pointed out that “no one was more anti-slavery than Ulysses S. Grant.” Grant played an integral role in emancipation and later took a stand against the Ku Klux Klan, so it is surprising  that protests in the name of racial justice would attempt to diminish his legacy. Likewise, it is difficult to understand the “antifascists” in the United Kingdom who oppose public celebrations of Winston Churchill, who led their nation in the fight against fascism.

Some people see an inconsistency between the removal of Confederate statues and the defense of monuments to Thomas Jefferson, James Madison, and George Washington. Some of the Founders owned slaves, so shouldn’t their statues be taken down, too? No. Owning slaves is an indefensible personal flaw. It cannot be justified, even through the lens of historical relativism. However, monuments do not wholly endorse the personal morality of their subjects. They endorse their contributions to our Republic, which are indisputable in the case of these three men.

In evaluating the legitimacy of a historical monument, there are two questions we should ask ourselves. First, did the individual in question believe in the American experiment and devote their life to the advancement of the foundational principles of liberty and equality (which we clearly have not fully attained)? Secondly, does the statue celebrate the subject for actions that are worth celebrating? Obviously, all forms of Confederate celebrations fail both tests. Traitors, by definition, do not believe in the American experiment. More egregiously, the defense of slavery is the antithesis of America’s founding ideal of equality. It is also relevant to note that Confederates are celebrated for their participation in the rebellion, not despite it.

The Founders, despite being deeply flawed men, are more than worthy of public veneration. Jefferson, for example, authored the document that inspired resistance to oppression around the globe. Similarly, Madison devised the blueprint for the most successful constitutional republic the world has ever known. Washington’s leadership during and after the Revolutionary War and his incredible step to relinquish the presidency after two terms provided immeasurable stability to the young nation. These contributions deserve to be honored.

On Tuesday, presidential candidate Joe Biden noted the important distinction between the two groups of historical figures. The former vice president stated, “The idea of whether or not George Washington owned slaves or Thomas Jefferson owned slaves, and somebody who was in rebellion committing treason trying to take down a union to keep slavery, I think there’s a distinction there.”

The removal of Confederate statues must be done through appropriate procedures, whether those be through a city council or a state preservation board. By uprooting these statues, we are saying that our community does not celebrate the cause of the Confederacy. This is not “erasing history,” as no one learns history through observing Lost Cause monuments (many of which, by the way, contain factual inaccuracies in their inscriptions). However, for an unelected group to destroy a statue does not indicate any progress, but instead endangers the statues that are truly worth defending, as seen with the toppling of Grant.

Esteemed historian and Vanderbilt professor Jon Meacham put it perfectly when he asked, “Did the person being commemorated devote themselves to the constitutional experiment in seeking a more perfect union?” In the case of the men who founded the United States, the answer is absolutely in the affirmative. For the Confederates who sought to destroy it so they could maintain slavery, the answer is a resounding no.