Meet the Women Trying to Flip the Senate 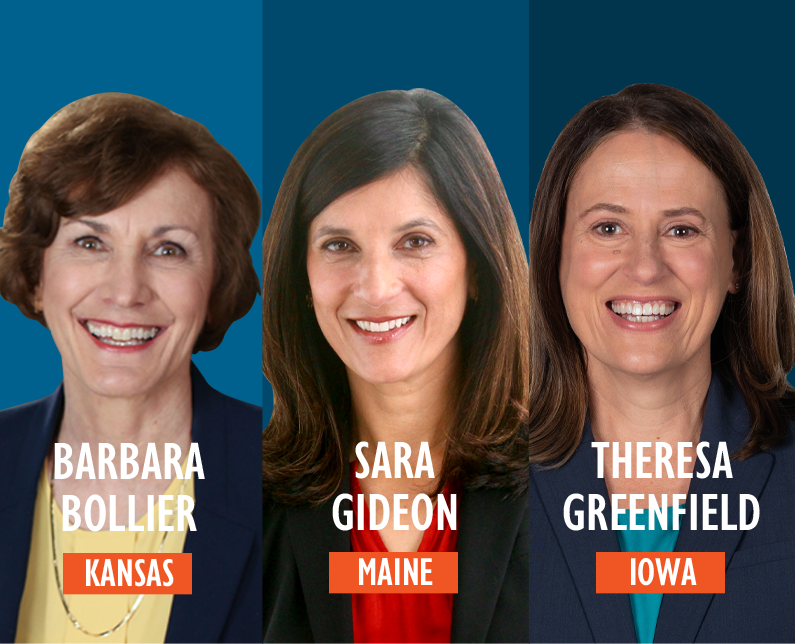 As Election Day is less than four weeks away, both early in-person voting and mail-in voting are underway across the nation. With Democratic presidential candidate and former Vice-President Joe Biden selecting California Sen. Kamala Harris (D-CA) as his running mate, it marks only the fourth time in US history that a woman has been on a presidential ticket. Additionally, Democrats are seeking to reclaim the Senate majority, which has been under Republican control since the 2014 midterm elections. In this cycle, more women than ever before are running for congressional office, most of whom are Democratic nominees.

One of the more hotly contested Senate races is between incumbent Sen. Susan Collins (R-ME) and Sara Gideon (D-ME). Collins, who has held her seat since 1996, faces opposition in Maine largely in part to her controversial votes to support the 2017 GOP tax plan, to confirm Brett Kavanaugh to the Supreme Court in 2018, and to acquit President Donald Trump during the impeachment trial earlier this year.

In the aftermath of Collins’s vote to confirm Kavanaugh despite multiple sexual misconduct allegations put forth against him, her popularity among women sharply declined, only attaining a 25% approval rating among women under the age of 50 in Maine.

Gideon, the current Speaker of the Maine House of Representatives, criticizes Collins’s reluctance to oppose the President on a variety of issues, such as healthcare legislation and the future of Roe v. Wade, climate change policy, and the economy. Currently, Gideon holds a five point percentage lead over Collins. If Gideon wins, Mainers would oust the last Republican member of Congress from New England.

A rather unexpected Senate race that Democrats are focusing on is in Kansas between two physicians: Rep. Roger Marshall (R-KS) and Kansas State Sen. Barbara Bollier (D-KS).

As a moderate, Bollier’s platform aims to attract support from both liberals and conservatives. It was only in 2018 that life-long Republican Bollier became a Democrat, commenting “My moral compass is saying, ‘I can’t do this anymore,’ and you throw that in with Donald Trump, and just from a moral position, I can’t be complicit anymore.” She further criticizes the GOP’s opposition to LGBTQ rights, gun control, and Medicaid expansion.

On the other hand, Marshall portrays Bollier as too liberal to represent deep-red Kansas in the Senate. The two clash on the future of the Affordable Care Act (ACA), as Marshall wants to repeal and replace it. He has also repeatedly challenged her stances on climate change policies as being harmful to Kansas’s economy. Several polls following the race have had varying results, but a recent poll puts Marshall about two percentage points ahead of Bollier, leading to a close race in a state that has not sent a Democrat to the Senate since 1932.

Another closely watched Senate race is taking place between incumbent Sen. Joni Ernst (R-IA) and Theresa Greenfield (D-IA). Challenger Greenfield is a businesswoman who centers her platform around strengthening the ACA, Medicare, and Social Security.

Incumbent Ernst’s record includes voting to repeal the ACA in 2017 and breaking campaign promises after supporting the President’s proposals to decrease Medicare and Social Security disability spending. Despite Trump carrying the state by nine percentage points in 2016, polls currently indicate a five point lead for Greenfield.

Reactions from the Vanderbilt Community

These races come following the 2018 midterm elections that resulted in a record-setting 126 women, consisting of 106 Democrats and 20 Republicans, being elected to Congress. As a result, 2018 inevitably drew many parallels to the strides women made in the infamous 1992 “Year of the Woman” elections.

In light of the increasingly higher rates of women deciding to run for office in 2020, Tanya Tejani, the current president of Vanderbilt Women in Government, comments, “Electing these women brings us one step closer to achieving gender parity in this traditionally male dominated sector of society. Young women, like myself, look up to these politicians and are assured that we, too, will have a seat at the table when it is our turn.”

According to Amanda Clayton, a professor of political science at Vanderbilt, some of the increased mobilization in women running for office can be attributed to the 2016 election, with women witnessing “an open misogynist winning and adopting anti-feminist policies.” Donald Trump has repeatedly used misogynistic language to mock the physical appearances of women, degrade women he disagrees with, and even to boast about sexual assault.

After Trump’s 2016 victory, Professor Clayton suggests it may have “motivated more women to run, as women saw themselves as solutions to policies they didn’t like.” In turn, she describes that voters, especially on the left, may have a greater demand for women candidates because of a “cognitive link” between the policies that are associated with the right and the fact that about 90% of the members of Congress in the Republican Party are men. Subsequently, there is a realization that “the people best to combat this are women, creating an appetite among voters for women candidates.”

Although men are still overrepresented in Congress, as women only make up 23.7% of Congress, the reactionary spike in the number of women may indicate a step towards women having a more representative voice in politics.