The Road Ahead for Amy Coney Barrett 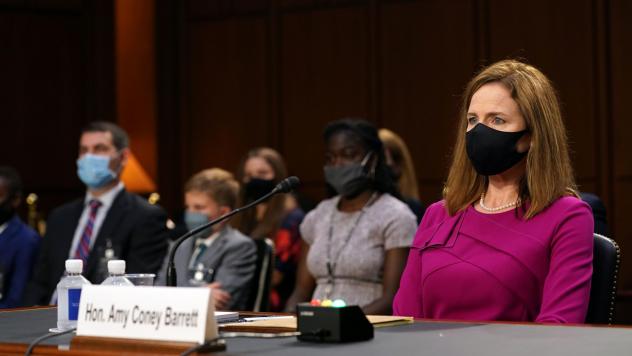 With Senate confirmation hearings underway for President Trump’s Supreme Court nominee, Judge Amy Coney Barrett’s road to the Supreme Court has never seemed murkier. Confirmation to the Supreme Court is decided by a simple majority vote in the Senate, with the vice president casting a deciding vote in the event of a tie. Republicans currently hold a 53-47 majority in the Senate. With all Democrats and Independents expected to vote against Judge Barrett’s confirmation, and with Vice President Mike Pence expected to vote in favor, Barrett would need 50 out of the 53 standing Republican senators to vote in favor of her confirmation. However, with recent Republican COVID-19 diagnoses and the potential for senators to break from the party, Barrett’s confirmation is all but certain.

Republicans are currently planning to hold a confirmation vote for Judge Barrett prior to November 3rd, Election Day. In that event, there are currently three Republican senators that may break from the party and vote against Barrett’s confirmation. The first of these is Susan Collins of Maine. Engaged in a tough re-election battle, Collins is suffering in the polls due to her 2018 vote to confirm Brett Kavanaugh to the Supreme Court. Additionally, Maine remains a state in which Trump is deeply unpopular. Collins has tried to distance herself from Trump on other recent issues as well. Although Collins has not explicitly stated she would vote against Barrett’s confirmation, her recent distancing from the Republican party as well as her stated opposition to holding a vote prior to the elections make her anything but a certain supporter.

Finally, Utah Senator Mitt Romney is seen as a potential wild card in the confirmation vote. Romney has been highly critical of President Trump and his administration in the past, notably being the only Republican senator to vote guilty in Trump’s impeachment trial on the count of abuse of power earlier this year. Unlike Murkowski and Collins, Romney has publicly supported a vote on Trump’s nominee prior to Election Day. Additionally, Romney did meet with Barrett personally, and highlighted her “impressive background.” However, his prior willingness to break from the Trump administration and the Republican Party seemingly make Romney a potential source of problems for Barrett’s confirmation efforts.

Even if all three of these Senators vote against Barrett’s nomination, Barrett would still likely be confirmed, as a tied vote in the Senate would allow for the vice president to cast a decisive vote, which would undoubtedly be in favor of Barrett’s nomination. However, three other Republican senators—Mike Lee of Utah, Thom Tillis of North Carolina, and Ron Johnson of Wisconsin—have tested positive for COVID-19. While infected, these senators would be unable to participate in Judge Barrett’s confirmation process in any capacity. Although it is expected that these three Senators will all recover fully before a confirmation vote, it is unclear whether or not they could have passed the illness on to any of their Republican colleagues. As such, should more Republicans come down with the illness, their majority could fall.

Additionally, should Republicans fail to push a vote through before Election Day, it is unclear which senators would support a vote during a lame-duck session. Furthermore, Democrat Mark Kelly is also currently leading in the polls against incumbent Senator Martha McSally in an Arizona special election. Should Kelly win this election, he would be sworn into office on November 30th rather than January 3rd, due to the fact that this election is taking place to fill the late John McCain’s vacant seat. As such, the Republican majority would fall to 52-48, so should a vote be held after November 30th, Barrett’s margin for confirmation gets significantly smaller.

In all likelihood, the Senate will confirm Judge Barrett to the Supreme Court prior to November 3rd. However, given recent COVID-19 developments, Barrett’s road ahead has become much less clear.