Guide to the 2020 Senate Battlegrounds: Volume 1 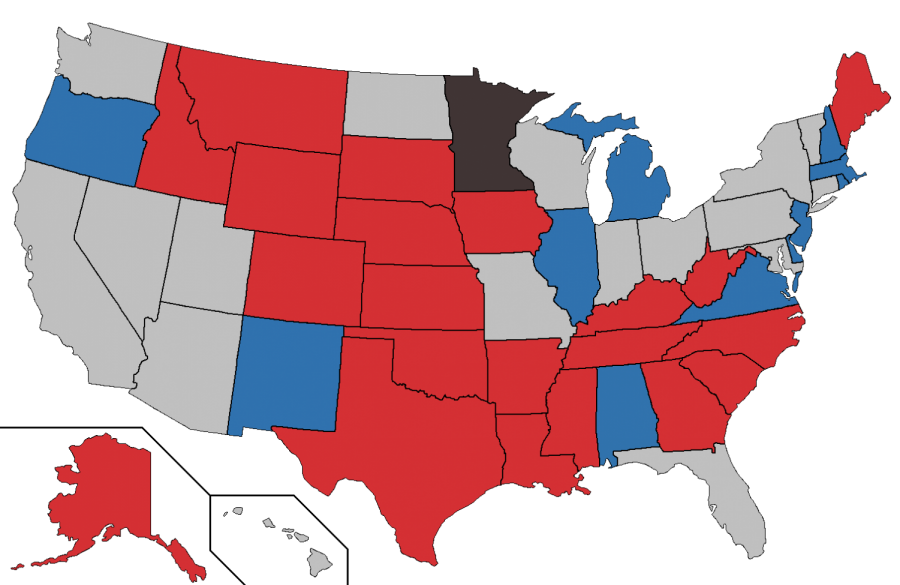 Once again, Democrats are hoping to retake the Senate in a presidential election year. While 2016 shocked them and 2018 had too difficult of a map to overcome, they face much fairer weather in 2020. Republicans are defending 23 seats, two of which are in states Clinton carried. The Democrats are defending 12, two of which are in 2016 Trump territory. While each race is independent, they are also all tied to national trends. Since polls have begun to take shape, it appears the Democrats have a strong path to retake the presidency and the Senate.

The first volume of this article will address the first two categories of my analysis: those elections with challengers that seem like long-shots or seats that are more unlikely to flip than not. I have based my assessments loosely on polling averages from RealClearPolitics models and from FiveThirtyEight (as of Oct. 31), as well as my own independent analysis. This guide will cover each 2020 Senate battleground except for the Georgia special election, which is expected to reach a run-off stage. Volume two will be released Monday, Nov. 2.

Part I: If Everything Goes Right

Georgia, with its blue-ing reputation and two competitive Senate seats, could be a fascinating state to watch on election day. Still, if the Democrats win the state’s electoral votes and at least one Senate seat, the national story was probably written far before we look to Georgia. The Democrats in this election are running a familiar face, former Congressional staffer Jon Ossoff. Ossoff lost a competitive and nationally watched special election for a Georgia house seat which has since flipped blue. Still, Georgia is what is known as a relatively “inelastic” state, meaning that results tend to not vary much between elections. Elastic states on the other hand are more likely to include cross-over voters and more unpredictable results. This means that inelastic Georgia may have the internals to bring this race close, but it will be difficult for Democrats to go over the top. Ossoff, who is hoping to be one of the youngest senators in history, is facing incumbent Republican Senator David Perdue, who seems to have the edge in most polls. Still, they are generally within the margin of error. This is a toss-up with a slight edge to Perdue.

Much like Colorado, Montana Democrats’ strong recruitment was critical to making this election competitive. Unlike Colorado, however, Montana Democrats have an uphill battle in the decidedly pro-Trump state. Current Governor Steve Bullock is still incredibly popular in the state and was reelected in the Republican-leaning year of 2016. Furthermore, in 2018, incumbent Democrat Senator Jon Tester won close reelection. This is probably the best chance Democrats will have in generations to defeat a Republican incumbent in Montana. Although, Republican Senator Steve Daines remains slightly ahead in the state.  This could be because of Bullock’s unsuccessful presidential run which associated him with national Democrats likely to be unpopular within the state. Still, Montana remains in some way the antithesis of Georgia in terms of national partisan elasticity, so this very well could be the perfect storm for Bullock.

In what is looking like one of the most surprisingly competitive races of the season, long-time Senator Lindsey Graham, R-S.C., is trying to fend off an incredibly well-funded challenger in Democratic Party official Jaime Harrison. Graham, who began as a fierce critic in the age of Trump, has now turned into one of the president’s closest allies. This switch may have cost him some anti-Trump Republicans, frustrated with his flip-flop and some pro-Trump Republicans wary of his motives seeing as he has fallen behind Trump nationally. Polls out of the state show a nearly tied race, which may indicate a shift in a growing and suburbanizing state like South Carolina since Graham’s easy reelection in 2014. Still, South Carolina has similar elasticity to Georgia so Harrison may very well bring this race close, but will have a difficult time at overcoming the state’s Republican lean. Even moreso, the recent confirmation hearings for Justice Amy Coney Barrett only reinforced Graham’s conservative appeal and fundraising numbers. Harrison has already overperformed all polling expectations, forcing Graham to beg for money during several television appearances. Still, it would be quite a shock and truly indicate the national environment if Harrison wins.

Let’s take a turn towards the other end of competitive Senate seats and discuss a Republican pick-up opportunity. Michigan was the surprise Republican darling of 2016 when she broke red for the first time since Reagan. For astute political observers though, it was part of a long-running trend in Rust Belt states pushing white, working-class voters towards the Republican Party. Michigan is reddening and will be the target for Republicans to replace changing territories like Arizona and Georgia. For now, the state is teetering and incumbent Senator Mark Peters faces Jon James. James lost a close election in 2018 against Debbie Stabenow and is now running again.  He is well-funded and unique as one of the few Black Republicans running statewide in any election. Senator Peters, on the other hand, has had a quiet incumbency and failed to make waves within the state for good or bad. Polling in this state has only tightened in recent weeks and it appears Peters may even be running behind Biden. Also, who knows if Michigan is falling for the same errors that plagued pollsters in 2016?  This race looks likely to stay blue for at least one more cycle – but, if Peters and Michigan fall to the Republicans, it will be a tough day for the Democrats.

Republicans narrowly avoided catastrophe when former Kansas Secretary of State Kris Kobach lost the primary to become their Senate nominee. Kobach, deeply unpopular within the state, already lost the governorship just two years ago and his victory would have catapulted this race to near the top of our list. Instead, Kansas Republicans nominated the safe choice, Congressman Roger Marshall. Against him, however, is a well-recruited Democratic nominee in State Senator Barbara Bollier. Bollier switched party affiliations from Republican to Democrat in 2018, giving her some conservative credibility in a deeply red state. However, the Republican Party has become increasingly unpopular within the state ever since the disastrous reign of Governor Sam Brownback. This state probably stays red on Tuesday, but if there were ever a time to have a Democrat in Kansas, this is it.

Democrats came oh-so-close to toppling their archnemesis Senator Ted Cruz, R-Texas, in 2018. While Congressman Beto O’Rourke, D-Texas, outpaced expectations and the state continues to purple, 2020 does not look much more promising for the Democrats and their candidate, Air Force Major M.J. Hegar. Incumbent Republican Senator John Cornyn is not as controversial in the state as Cruz, and Hegar has not proved to be the fundraising magnet O’Rourke was. Polls show Biden is inching closer to flipping Texas blue, but overtaking this seat would represent a monumental shift in American politics.

Especially after the rushed confirmation of Justice Amy Coney Barrett, there’s nothing more that the Democrats would love more than to take down Senate Majority Leader Mitch McConnell, R-Ky. Yet after a fraught primary that saw Democratic establishment darling Amy McGrath nearly lose to progressive State Representative Charles Booker, this state looks unlikely to change hands. McGrath, a moderate and former Marine fighter pilot who made waves with a viral Congressional ad in 2018 is not a bad recruit whatsoever. In fact, early polls showed a slightly competitive race. But, McConnell has mostly pulled away to double-digit leads. His other role, as majority leader, is far more in jeopardy.

If the polls are wrong, again, and even more wrong than last time, and everything seems like it’s going right for Republicans on Tuesday, maybe they can sniff this Minnesota Senate seat. Democratic Senator Tina Smith is running for a full term after replacing embattled former Democratic Senator Al Franken, who resigned after allegations of sexual misconduct. Some polls show a large single-digit lead for Smith in a state that Trump narrowly lost in 2016. If this seat flips, then the floodgates have already engulfed the Democratic Party in 2020.