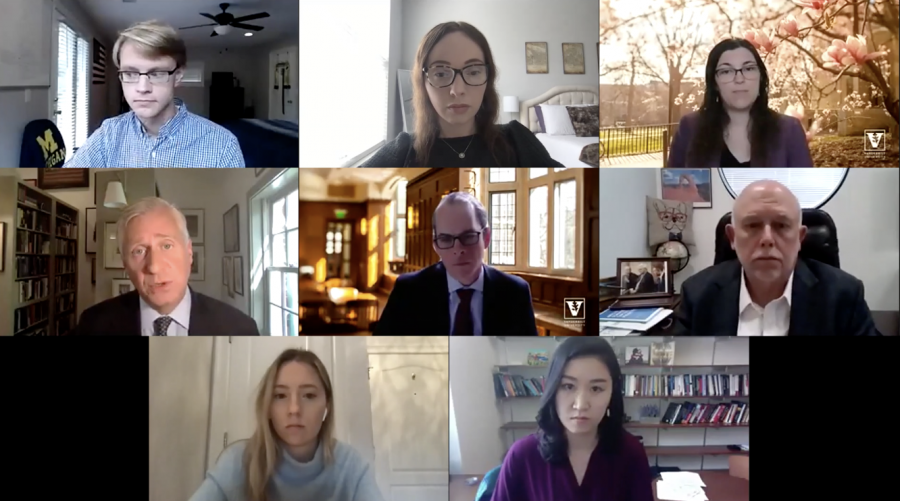 With the pandemic-driven transition to online classes at Vanderbilt for the Fall 2020 semester, students have had to adapt the ways in which they communicate with one another. Class group chats and online discussion boards have become the main method of discussion. This is particularly significant for larger classes, such as PSCI-1150 U.S. Elections, where 825 students engage in virtual academic discourse about some of the most politically significant topics of 2020. The 2020 Elections section is the biggest class in Vanderbilt history, and with 570 members in the class Groupme chat, many political opinions are in conflict.

Elections lectures are held in the Zoom webinar format, meaning students can only see the professors and teaching assistants. Consequently, the Zoom chat, Brightspace discussion boards, and class GroupMe chats are the only ways that Elections students interact. Since Zoom and Brightspace are visible to professors, GroupMe has quickly become the primary mode of informal academic discourse.

Sophomore Senator Matt Geleta notes that while there have been political debates in his previous political science classes, they have become a lot less civil online. He notes that “people are a lot more comfortable sharing things online.” At a time when meeting new people is difficult, the ease of making inflammatory remarks has only made it harder. Beyond academic conversations, these chats are the only form of social interaction between Elections students. Now that it is easy to make controversial statements behind the anonymity of a computer screen, the friend-making aspect of class has been largely diminished.

Since such group chats aren’t led by faculty, students must navigate these conversations by themselves. Sophomore Kemi Airewele, admin of the Elections Groupme, allows any political speech as long as it is restricted to a few sentences and is not an insult or attack. She works with two moderators to address issues whenever they arise. The group has largely been conflict-free, though she does receive occasional direct messages from individuals asking her to kick certain students from the group. Airewele says she abstains from doing so unless the comments are inappropriate and not related to the class.

Airewele’s work illustrates how certain students now have the ability to decide what their fellow students can say. Given the heightened role of chats and admins in an online format, silencing a student in a group chat effectively means silencing their voice in the class. Furthermore, these admins were not chosen democratically, but rather by chance. Multiple group chats were created in the first few weeks of class, but most dropped off as Kemi’s group became the largest. Now, not being a part of Kemi’s group chat is akin to no group chat at all–students could try to form their own group chats, but such groups would not be likely to gain a large following. Students who feel inappropriately silenced also have no recourse, since these group chats are not university-affiliated. This has created a power dynamic in which admins and mods have the potential to limit both academic discourse and social interaction among U.S. Elections students.

Junior Anna Qian, has been particularly vocal in expressing her opinions. Before classes began, she emailed the professors seven times sharing her political ideology and requesting certain topics be covered in class. Since then, Qian has made use of the discussion boards, the class groupme chat, and even the Brightspace class email feature–which she used to send a 1200 word email to every member of the class. Generally, Airewele permits most of Qian’s posts so long as they are no longer than a paragraph and refrain from conspiracy. When Qian shares long posts or strings of messages, though, Airewele requests that she post this content in the Brightspace discussion boards. Anna contests that she is only sharing a perspective that is “not represented in the academic field of study, or in classes, or in the mainstream media.”

Harangues from students like Qian have forced the Elections faculty to create rules for online discourse. Professor Joshua Clinton shared that the professors don’t focus on any particular student. Instead, they make the class about the content, rather than the opinions of the students. “Personal views aren’t class relevant,” he says. “It’s not a censorship thing–it’s that this is a class on political science. It’s not a class on political views.”

In a semester where academic discourse is almost entirely virtual, Clinton and Airewele’s rules have allowed for rigorous academic discourse without silencing students. Students seem to have minimal complaints so far, suggesting that both staff and students moderators are striking an effective balance between free speech and community censorship.